END_OF_DOCUMENT_TOKEN_TO_BE_REPLACED

HomeJust for KidsHow to Make Slime

OK guys, before today, I had no idea you could make Metamucil slime, but it is so fun! Seriously, I had no idea this was possible! I was smiling when it came together because the Engineer in me was thinking, “This is SO COOL!” haha That’s the dork in me. It’s a crazy little science experiment that you can actually play with! And it’s perfectly safe to taste test too! (Although, none of us actually tried eating it. It wasn’t nearly as tempting as the marshmallow play dough we made last week!).

Anything that has only two ingredients, and I’m game. It’s SO easy to make. I love it! The key ingredient here is the psyllium fiber. I’m not sure if they make Metamucil without it? But make sure you check the label first to make sure it’s in there or this experiment won’t work.

I still had a big tub of Metamucil in our cupboards from when our kids were born. Right after I had my second daughter, (or maybe it was my first? Man… how crazy is it that I’ve already forgotten!?) we went to Costco and stocked up on the super sized tubs of Metamucil. You know Costco. The tub was so big that there was no way we were going to make it through it, no matter how much the postpartum adjustment was wreaking havoc on my digestive system! haha Sorry. Too much information. But fast forward 4 years (or 6 years?) later and I’m glad I kept it in the cupboard!

This Metamucil slime has more of a flubber-like consistency than the homemade gak we made last summer from glue and borax. It wasn’t quite as stretchy as the gak, but it was super squishy. The kids had tons of fun squeezing it, squishing it and watching it ooze.

It’s not supposed to stick to the kids hands, but my little rascals were kind of rough with it. They squeezed it, stretched it and pretty much beat it to a pulp, so yes, in the end, they’re hands were a bit messy (it was easy to clean, so don’t worry too much about that). I was a bit more civilized with it and I just squeezed and stretched it and it didn’t stick to my hands at all.

Best of all, it only takes 5 minutes to make! So if you have Metamucil in your cupboard, you HAVE to try this. It barely uses any Metamucil, so you don’t even feel like your wasting it! So fun!

I got the idea from Paging Fun Mums. I saw it when I was on Pinterest this morning and I said to myself, “I NEED TO TRY THAT!!!” 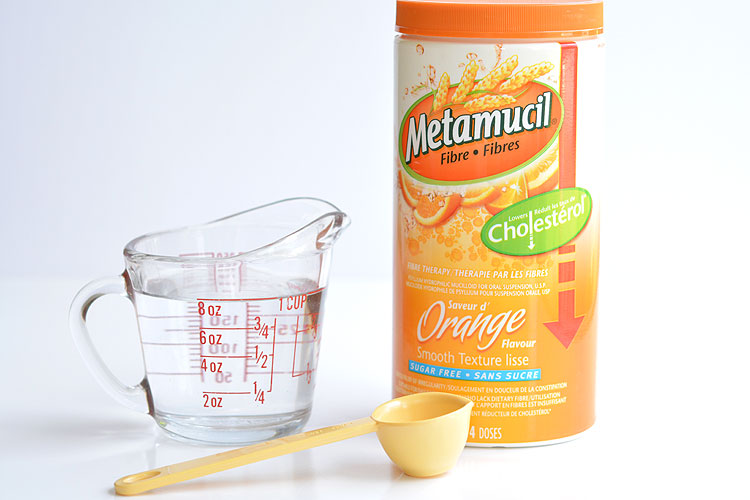 You might be thinking to yourself, “What!? That’s never going to work!” But I bet you’ve never microwaved your Metamucil before. That’s when the magic happens!

Make sure the microwave safe bowl you use is big. This stuff really bubbles up as it cooks and you really don’t want it to spill over. 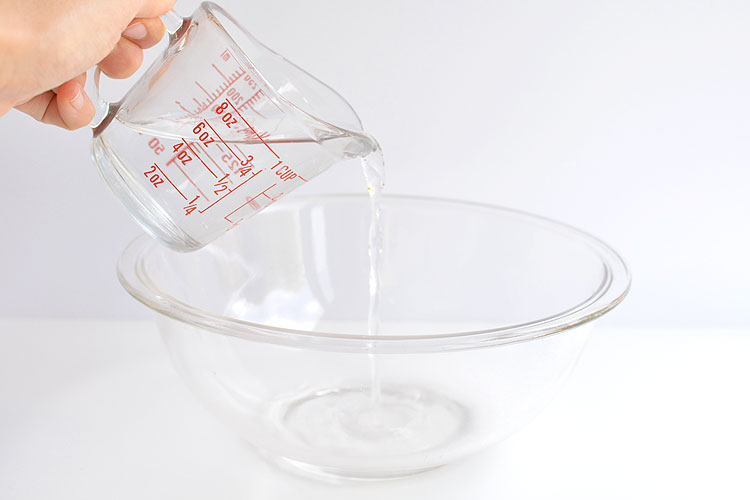 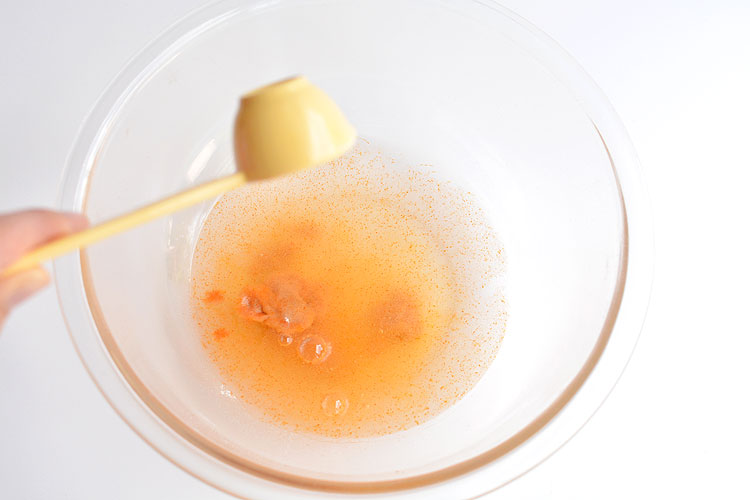 Then whisk it together for about 1 minute until it’s well combined. 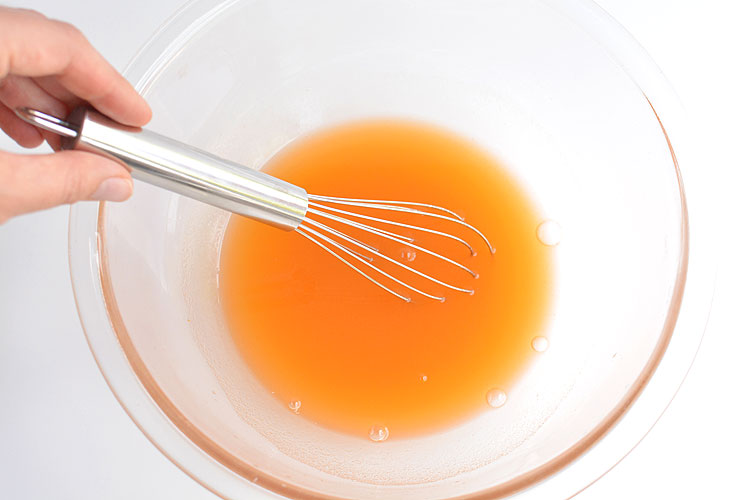 Cook it in the microwave on high for 5 minutes. Make sure you check it as it cooks to make sure it doesn’t bubble over. If it’s really bubbling high, you can pause the microwave, wait a couple seconds for it to fall down, and press start again. 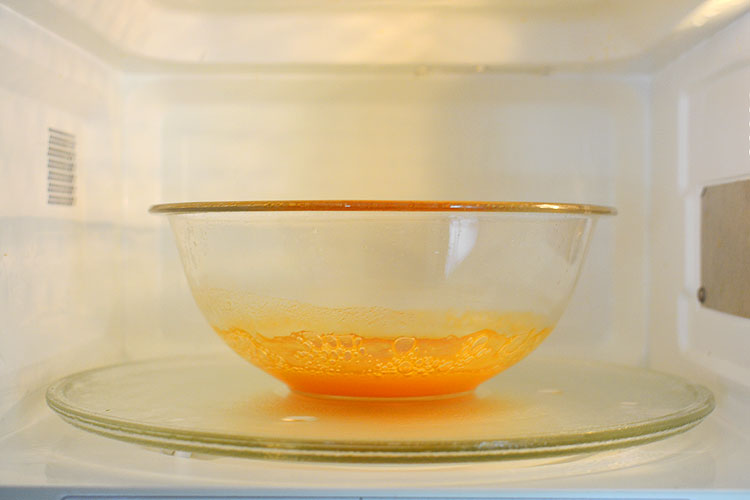 It’s HOT when it comes out, so be careful! I pulled it out of the microwave and it just looked like a regular liquid. I was kind of disappointed and thought it didn’t work. Until I put the spoon in and tried stirring it. 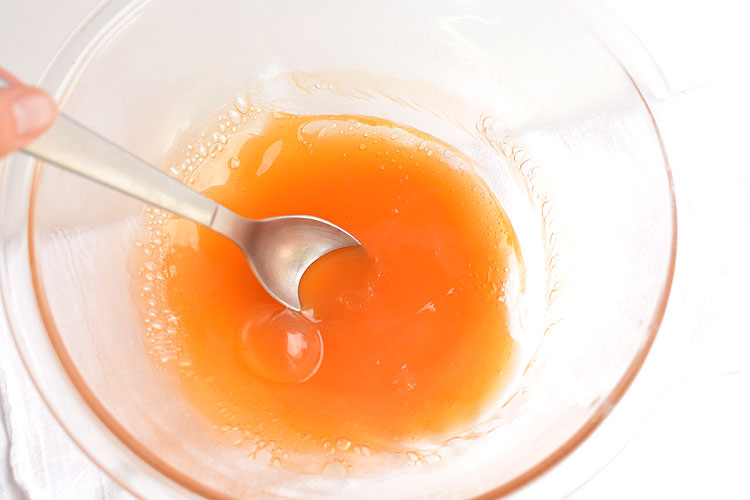 And right away as I stirred it you could tell it was slime. So crazy! This is where I started smiling because it was just too cool! 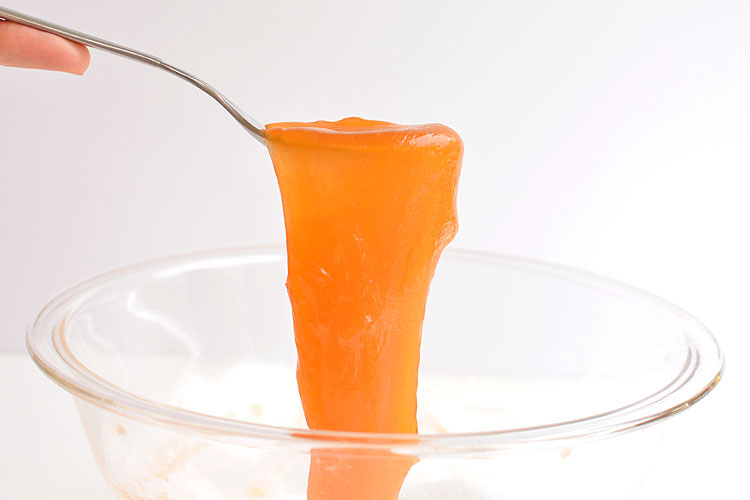 Make sure you give it a few minutes to cool off. I flattened mine on the counter for awhile (it doesn’t stick), and stretched it out and blew on it to cool it off. 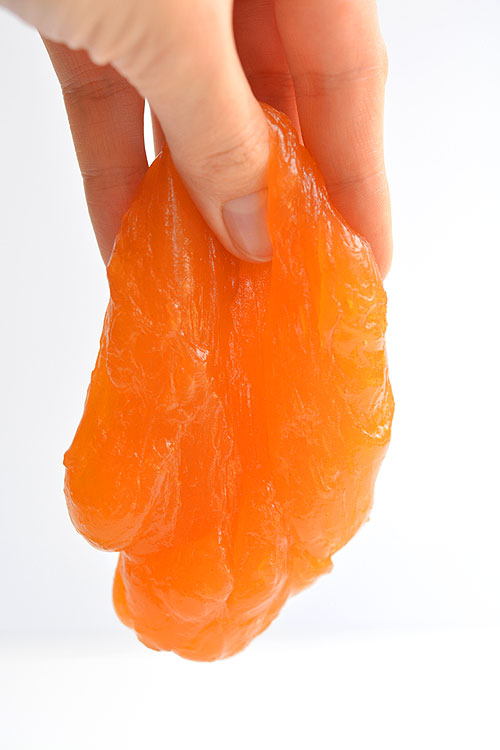 It didn’t ooze as much as the homemade gak we made, but it had a really neat flubber like texture to it. 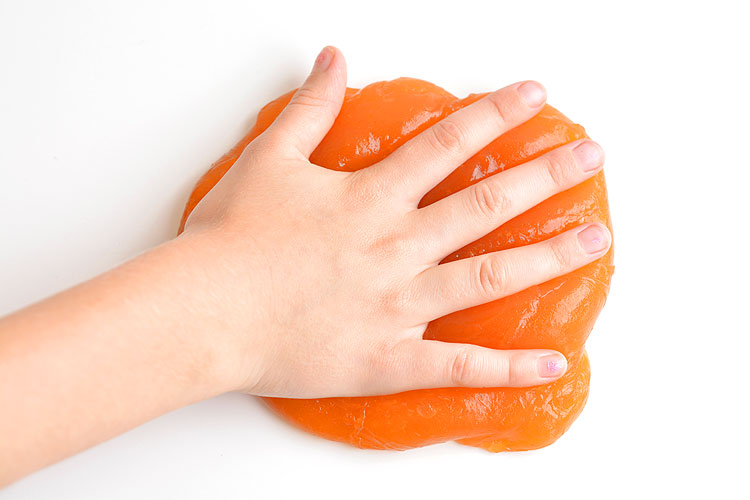 It really doesn’t stick to the hands very much, unless your kids REALLY try. 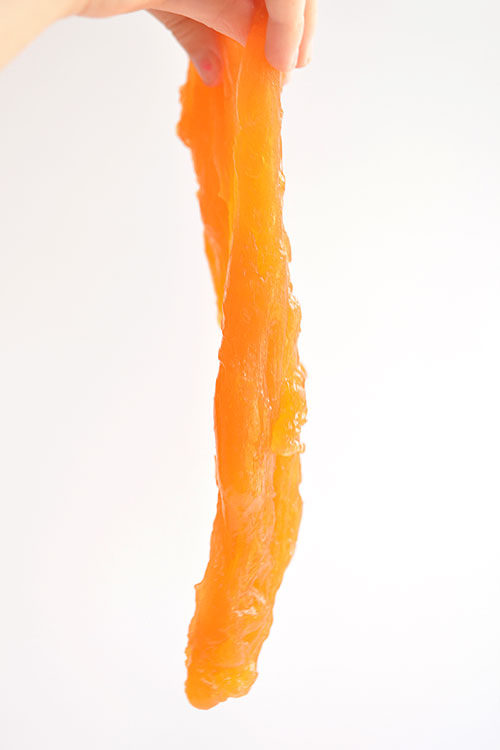 You can see in the photo below that my 6 year old was really going crazy with the stuff and it started to break down on her pinky finger. It was easy to wash off though. 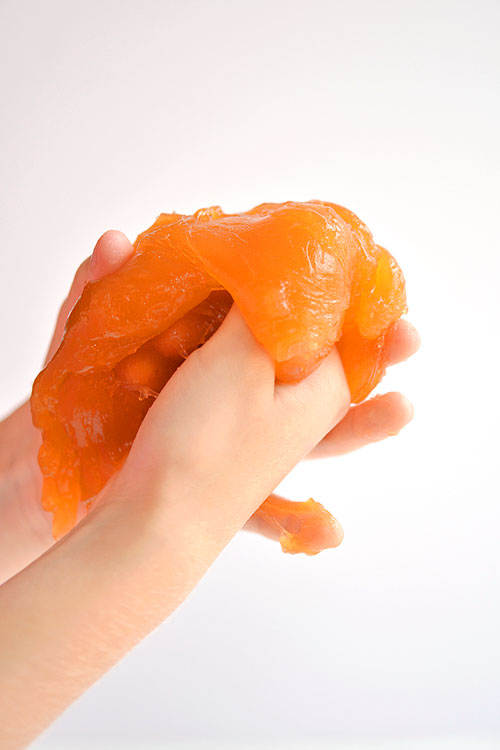 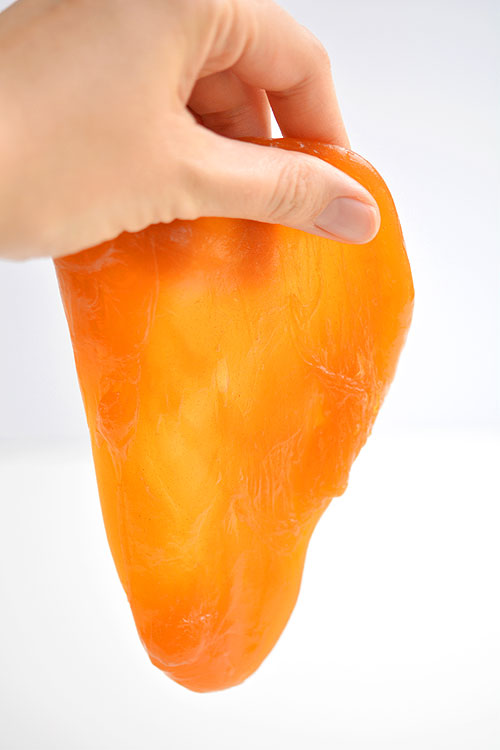 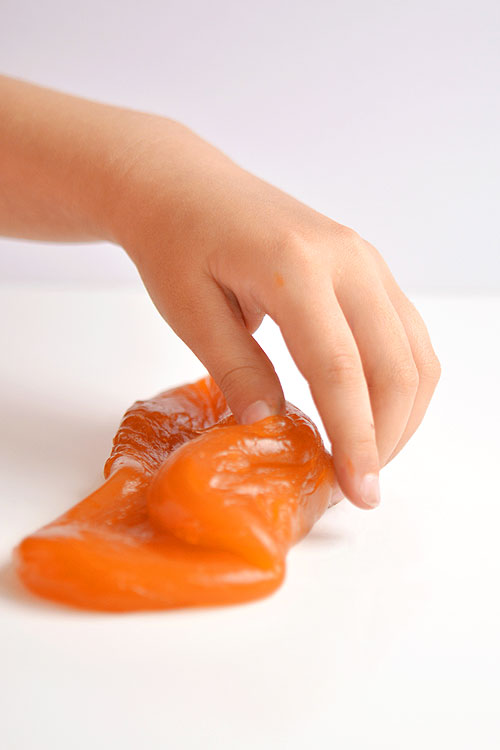 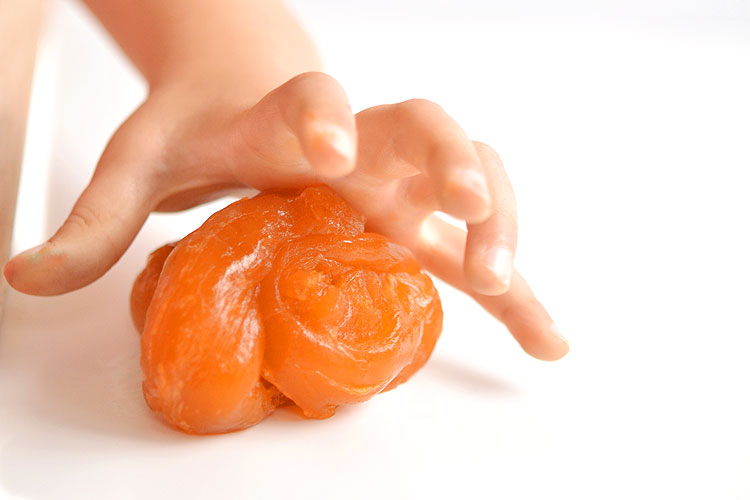 And it was REALLY squishy! 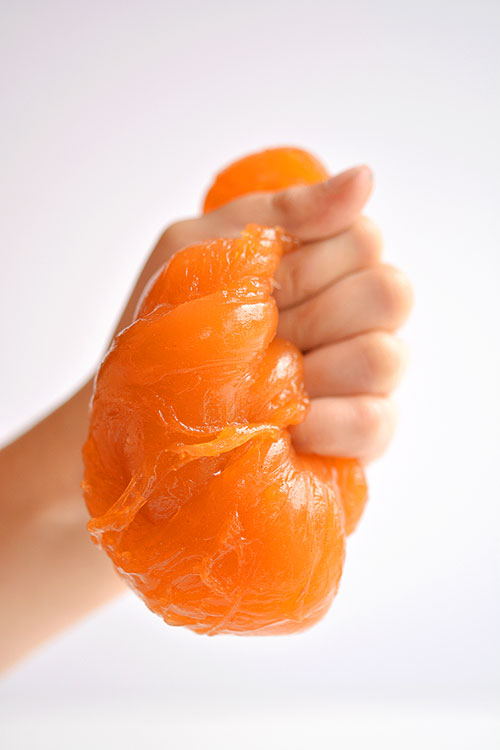 I tried the recipe two ways. The first time I made it with 1 cup of water and 1 Tablespoon of Metamucil and it had a stretchier, softer, slime consistency. But it did stick to the hands ever so slightly more.

Then I tried it with 3/4 cup water and 1 Tablespoon Metamucil and it had a harder, more flubber-like consistency. If you can make more than one batch, experiment with the quantities to see how it changes! 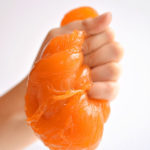 This Metamucil slime is the coolest science experiment ever! 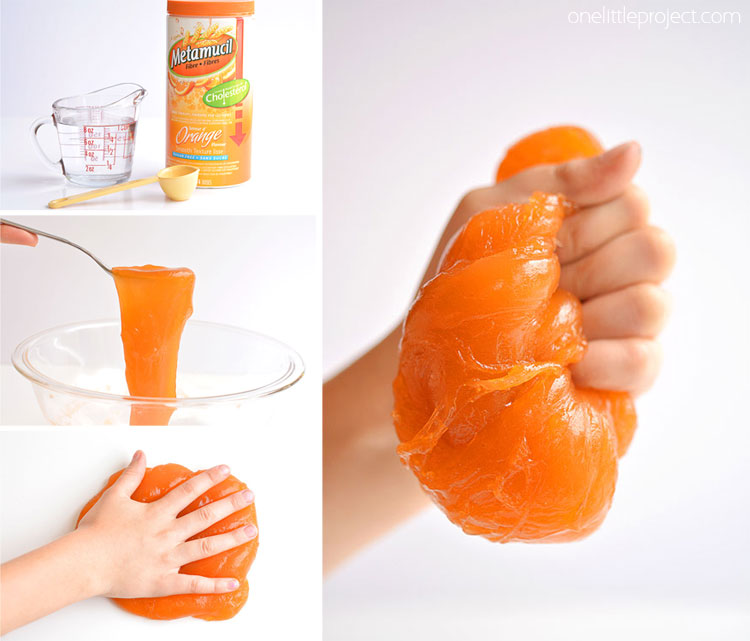 This Metamucil slime is the coolest science experiment ever! I’m still in awe that this is what happens when you put Metamucil in the microwave. I had no idea, but it is so darn fun! It’s a super quick activity that only takes 5 minutes to make and just TWO ingredients! It’s such a great activity to keep the kids entertained on a rainy day!

If you’re looking for more fun kids activities, check out the homemade gak we made last summer. It had the classic slime consistency and was so much fun! 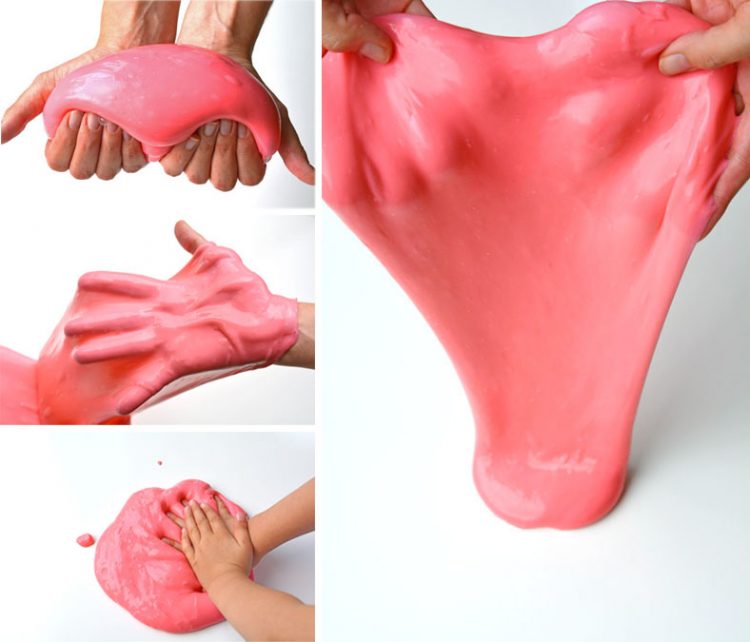 And check out the edible marshmallow play dough we made last week! Now THIS stuff was much better to taste test than the Metamucil slime! 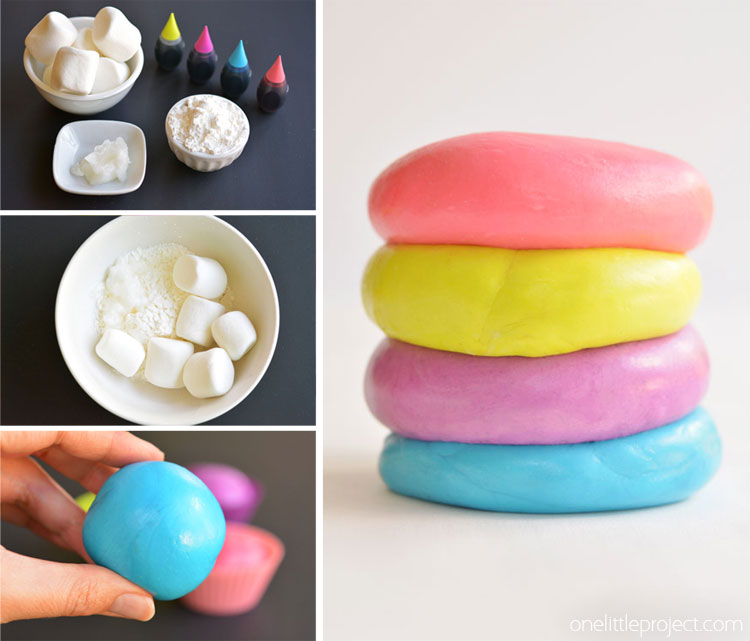