END_OF_DOCUMENT_TOKEN_TO_BE_REPLACED

I lost my Fitbit yesterday. And you know, part of me was actually relieved. On the inside, I was thinking, “YES!! I don’t have to feel guilty anymore about the days where I only get 3,000 steps!” (Oh come on, we all have those days…).

We went to visit my parents out in the country yesterday, and we picked apples from their giant apple trees way out in the bush. And then my dad took the kids on a tractor ride. I was convinced my Fitbit was lost forever somewhere out in their massive yard. But then my dad found it late last night under the kitchen table. Darn it! How does the Fitbit always manage to find its way back to you!?

So besides the fact that I now need to continue making an effort to get to 10,000 steps each day (which I’ve done once in the last 6 months… Ha!), it was a fun and beautiful autumn day full of amazing fall activities! And it put me in the mood for fall decor, fall crafts and celebrating fall in general!

Have you seen that fabulous pin going around Pinterest showing the multi coloured yarn balls? Seriously, take a look at how GORGEOUS these yarn balls are. So I thought, what a fun twist to turn those little balls into pumpkins! And you know what? They ended up looking awesome!

These yarn pumpkins are such a gorgeous little fall craft project – great for a table centerpiece or even a fall mantle. They’re beautiful on their own, or in a group!

How to Make Yarn Pumpkins

Here’s what you’ll need for each yarn pumpkin:

I found my yarn at the dollar store, which quite honestly, I thought was a little crazy! I was at the craft store last week, and all the yarn was at least $5 to $7 per ball, and it was all acrylic. I really wanted cotton yarn, because somehow I thought it would dry stiffer (no idea if that’s true?), and I managed to find it at the dollar store! 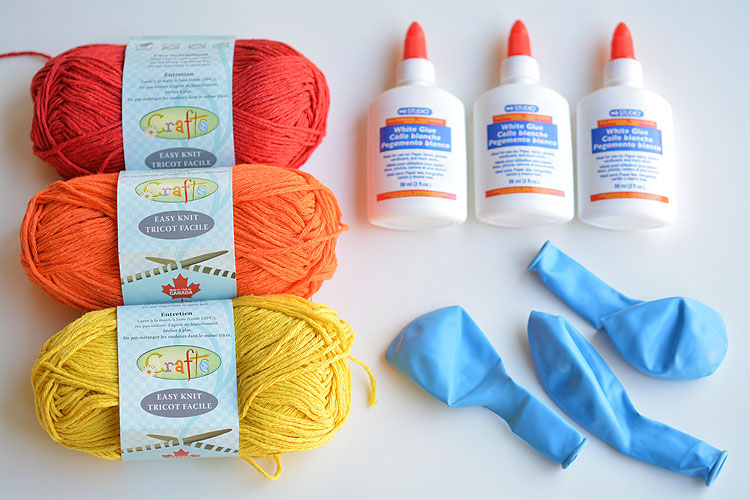 The yarn isn’t even made in China! (Yay Canada!) 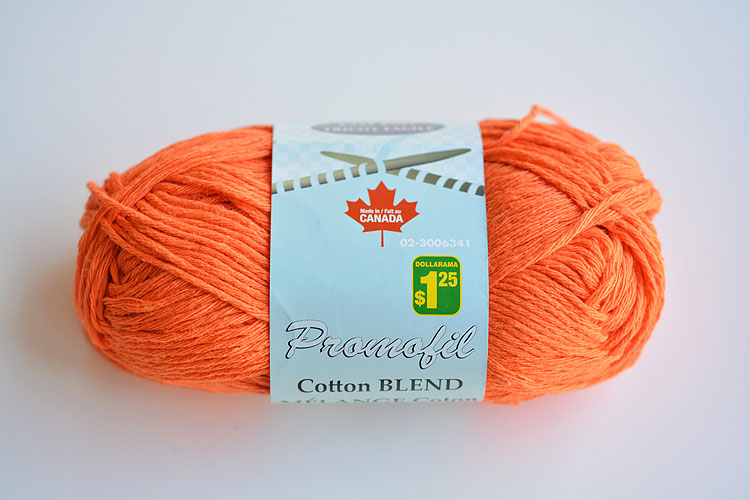 I started by blowing up 12″ balloons about half full. The bigger you blow the balloons, the more yarn you’ll need. But the smaller you blow them, the more egg-like the shape will be. It’s a balance. 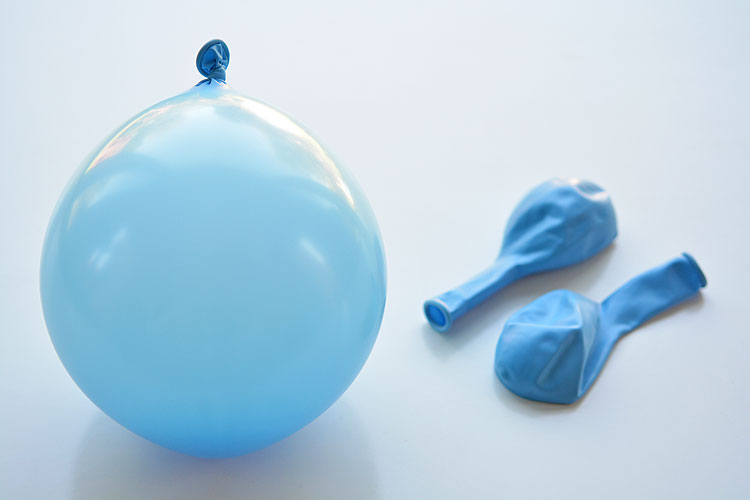 Cut out about 21 pieces of yarn about 36 inches long. I have a table that’s exactly 36″ wide, so I used the table top to roughly measure. If you make your pieces of yarn too much longer than that, they’ll get tangled when you soak them in the glue. 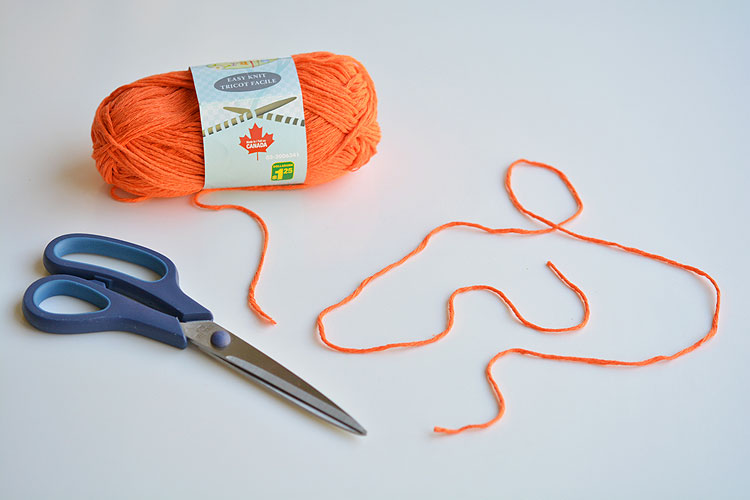 Tie one of the pieces of yarn to the end of the balloon. Open one of your kitchen cabinets and hang the balloon from the handle. It’s way easier (and cleaner) than trying to manipulate the balloon when it’s lying on a flat surface. 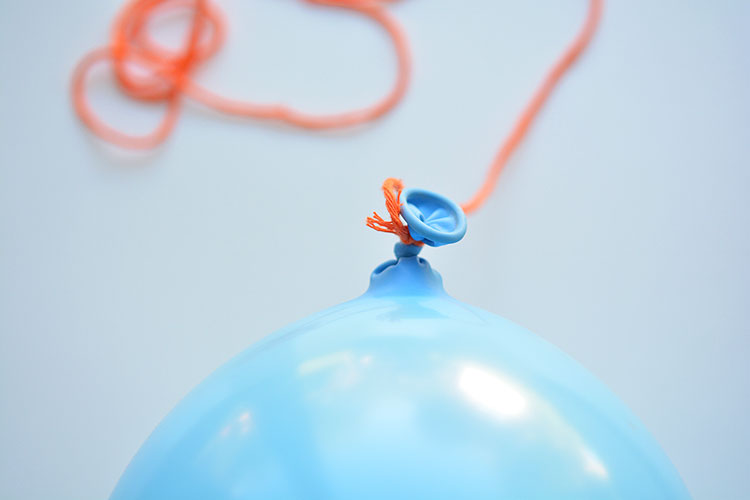 Pour the glue into a small bowl. It takes about one full 2 ounce bottle of glue per yarn pumpkin. I added three bottles into the bowl at a time just to make it easier.

Let’s talk about the glue

I used straight white glue – I did NOT water it down. (Well, at the end I added a little bit of water because it was starting to dry, but only enough to get it back to the right consistency). A lot of tutorials online will tell you to water down the glue with half water and half glue. I don’t recommend doing that. Even when using straight glue, the balls still aren’t rock solid, so you want to give them as much glue power as possible to hold their shape.

You can try adding corn starch or flour mixed with a little bit of water to the glue to make them a bit more stiff (I haven’t tried it myself though). I found that with the white glue, they hold their ball shape very well, but they can be easily crushed if you accidentally put something on top of them (or let the kids play with them…).

If you want the pumpkins to be rock solid, try using slightly watered down Mod Podge. Just know that if you use Mod Podge they’ll end up with more of a shiny finish when they dry, rather than the mat yarn finish that you get with white glue. 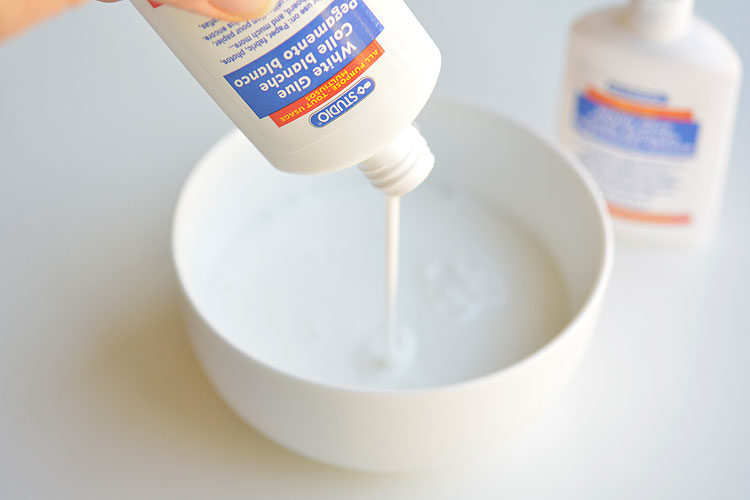 Dunk one of the pieces of yarn into the bowl of glue, and swirl it around gently with a plastic fork to get it completely covered with glue.

Hold the end of the piece of yarn with your fingers, then gently run it between the tines of a fork to remove the excess glue. I found that running it through the fork left enough glue on the yarn that it held its shape once it dried, but not so much glue that it was dripping everywhere.

I tried running the yarn through my fingers to “pinch” off the excess glue, but it took off nearly all the glue, and made the yarn ball very soft once it dried. The fork method worked way better. 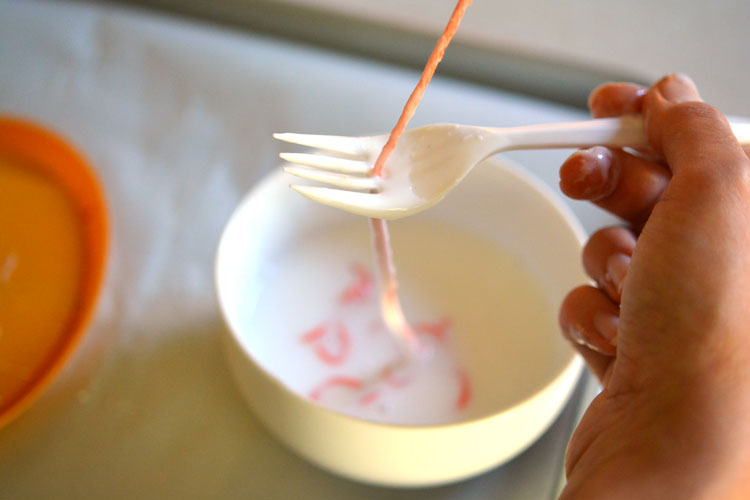 Take the glue covered yarn strand and press the end down somewhere (I liked to either start at the top or the bottom of the balloon) and wind it around the balloon, making sure the press down the ends of the yarn to secure them when they’re in place.

Repeat with the remaining pieces of yarn. 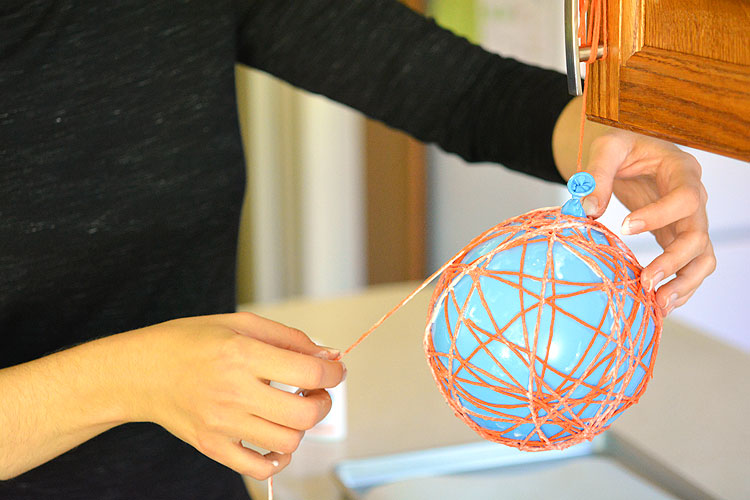 When you’re done, find somewhere to hang the yarn covered balloons to dry. I squeezed all of our jackets to one side in our coat closet, and hung the balloons there.

They did drip a few drops of glue as they were drying, so make sure you put down an old towel, tarp, or dollar store table cloth so you don’t wreck whatever is beneath them. 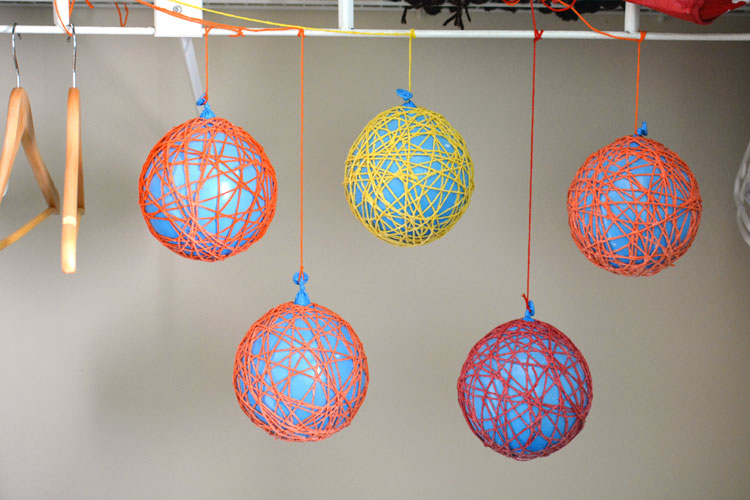 It took a full 24 hours for them to dry. But when they did, I was really happy with how firm they were! The glue hardened beautifully! 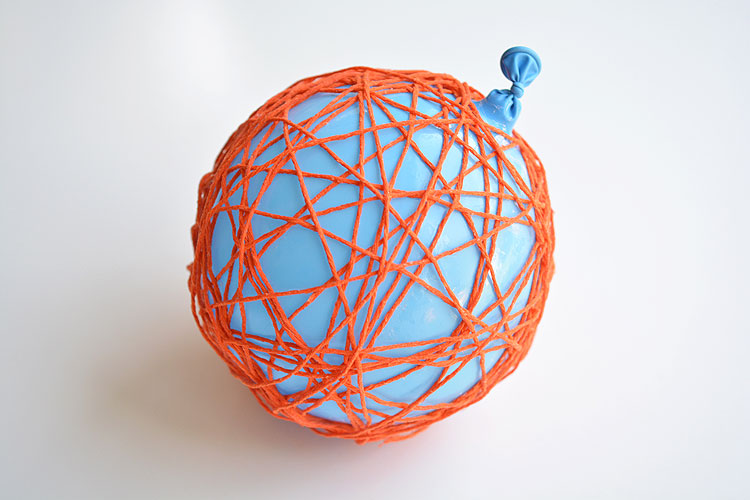 This is CRITICAL. You need to make sure you press your fingers down under the yarn to detach the glue from the balloon – around the entire surface of the balloon. It’s a little tedious, but if you don’t do it, the balloon will pull the yarn to the inside as it deflates and it may ruin the shape of your pumpkin. 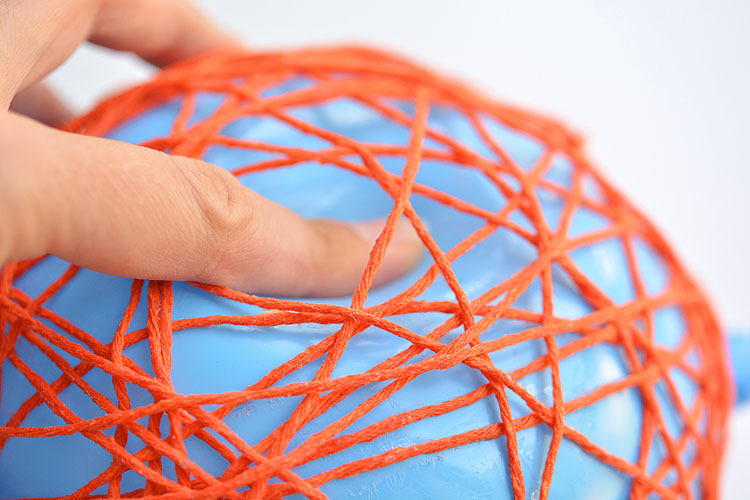 Make a very small hole in the balloon close to where the knot is (it won’t pop if you cut it near the knot). You want the air to leak slowly so you can detach any yarn that you might have missed as it shrinks. 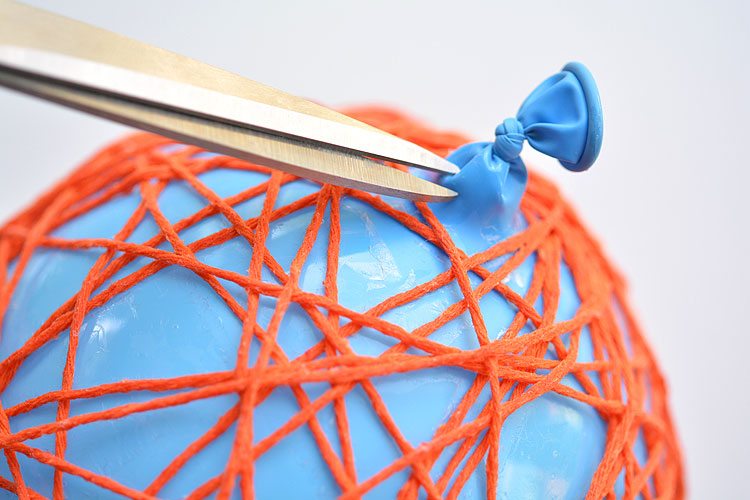 Then pull the deflated balloon out through one of the openings in the yarn. 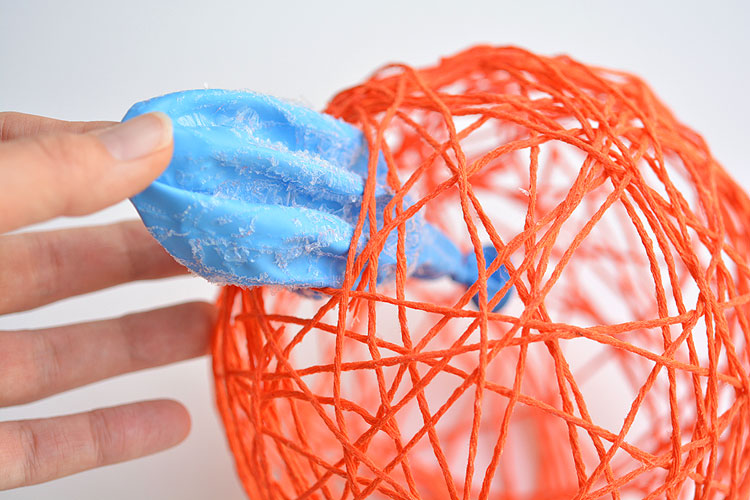 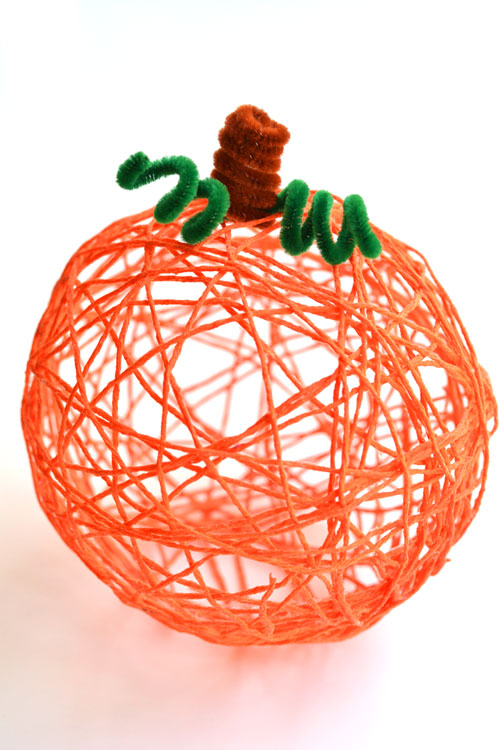 I made orange, yellow and red pumpkins… but I’ll admit, the red one kind of looked like an apple. Ha! Oops… 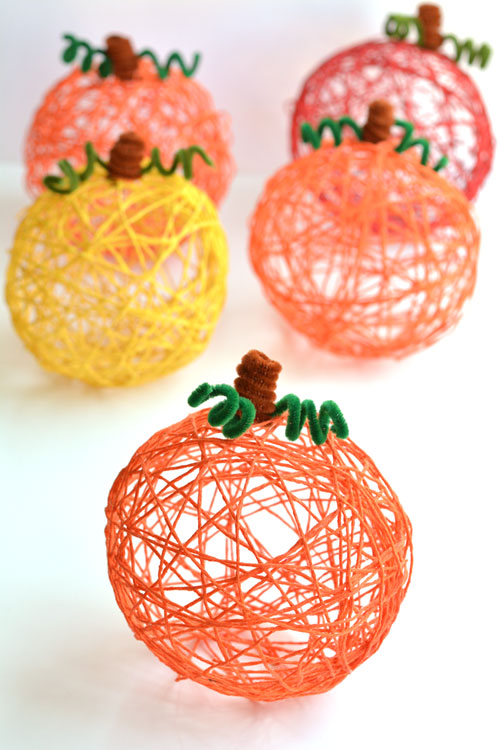 Pretty cute though, don’t you think? 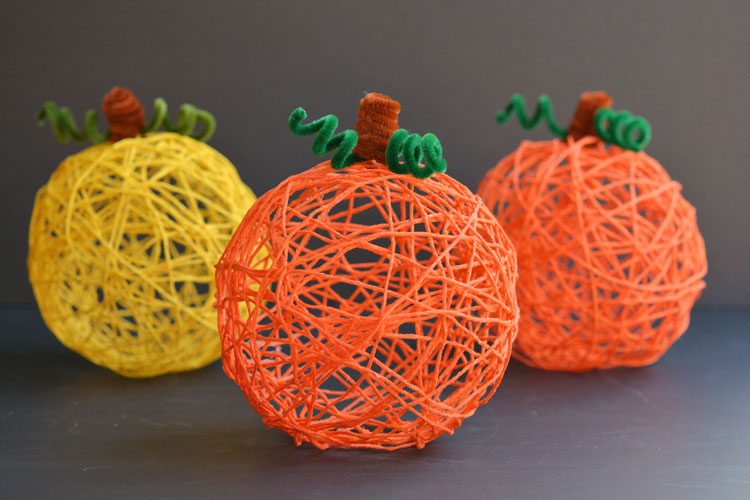 It’s not the quickest project in the world, but I love how they turned out! It took about 20 minutes per pumpkin to wrap the yarn, and then 24 hours to dry. 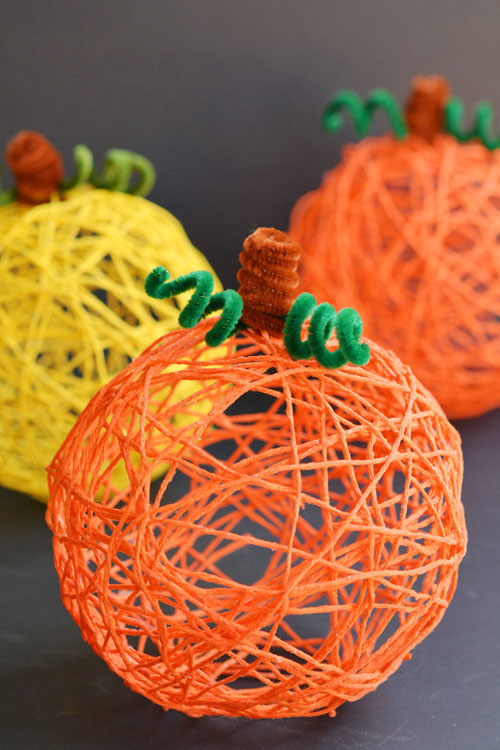 I tried getting the kids to help out, but they lost interest really quickly. My 6 year old didn’t want to get her hands dirty, so she took a balloon and left. My 4 year old looked really enthusiastic until it came time to touch the glue, then she informed me that she wanted me to make it for her. Maybe older kids would do better? 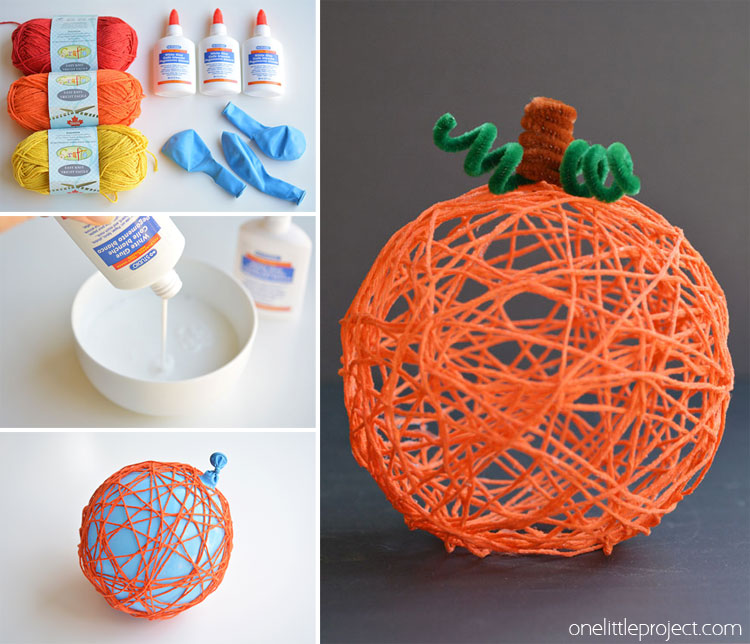 These yarn pumpkins are such a fun fall craft idea! They’d make a beautiful centerpiece or mantle decoration, or you could even use them to decorate for Halloween.

If you’re looking for more fun fall projects, be sure to check out our tissue paper pumpkin favours. They’re much quicker to put together and they make a fantastic Halloween party favour!