END_OF_DOCUMENT_TOKEN_TO_BE_REPLACED

My family eats a lot of traditional New York style cheesecake. Have you ever made one? They’re the super heavy (yet delicious…) cheesecakes that you bake. And they almost ALWAYS end up with a massive crack in the middle. The great thing about this pumpkin cheesecake is that since you aren’t going to be baking it, there is no cracking whatsoever.

It’s creamy and smooth, with just the right pumpkin flavour. It definitely tasted pumpkin-y but it wasn’t overpowering – which I really liked! And you can never go wrong with pumpkin pie spice. It pretty much makes every pumpkin dessert taste AMAZING!

I even managed to convince my kids to eat a slice. They’re still adjusting to the flavours of regular pumpkin pie, so it’s not exactly something they’re super comfortable with. But 2 out of 3 of my kids ate the piece I gave them. (I couldn’t convince my 4 year old to try it…). My 9 and 7 year olds definitely didn’t want a second piece – But hey – I didn’t eat pumpkin pie until I was a teenager, so I was pretty impressed that they ate any at all!

This is a really fun dessert to make. I’m not sure why!? There is something so satisfying about folding together the delicious, fluffy cheesecake filling. And when it comes out of the springform pan, it’s just plain pretty!?

Top it with whipped cream and sprinkle some pumpkin pie spice on top. Yum!

Check out our video for how to make No-Bake Pumpkin Cheesecake:

If you’re looking for other easy and delicious dessert ideas, check out our recipes for:

The full printable recipe is at the end of this post, but here’s a basic run down of the steps…

Once you make the crust and have it pressed into the spring form pan, it needs to go into the refrigerator for about 30 to 60 minutes. Pop it in the fridge, and then by the time you’re done mixing together the cheesecake filling, your crust should be ready to go. 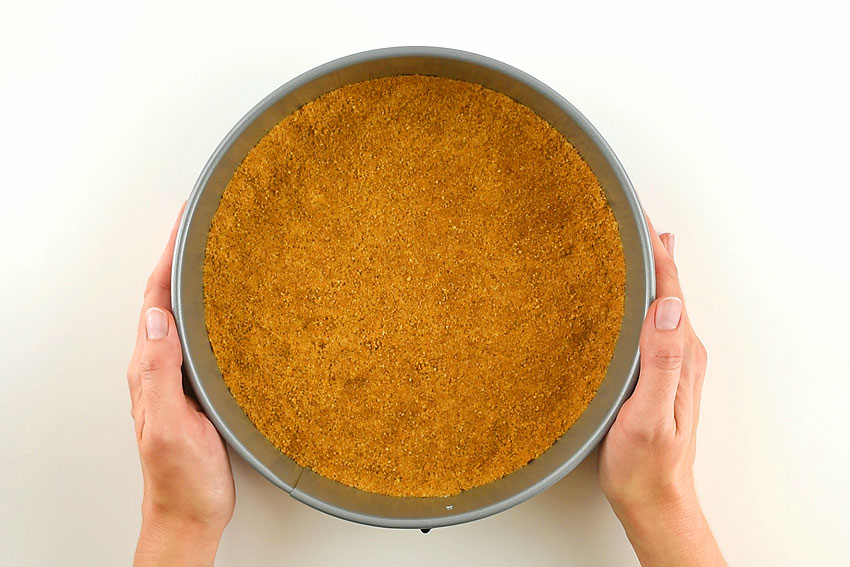 Doesn’t the filling look amazing!? Basically you’re going to mix together the pumpkin mix. And then in a separate bowl, whip up the whipped cream.

Make sure you whip the whipping cream until it’s super fluffy and makes peaks when you lift the mixer out. The whipped cream has to be really whipped or it won’t set. Don’t whip it until it turns into butter or anything, but make sure you whip it long enough that it makes good and strong whipped cream.

Then you fold the pumpkin filling into the whipped cream with a spatula until it’s evenly mixed. It’s light, fluffy and really just fun to mix together! 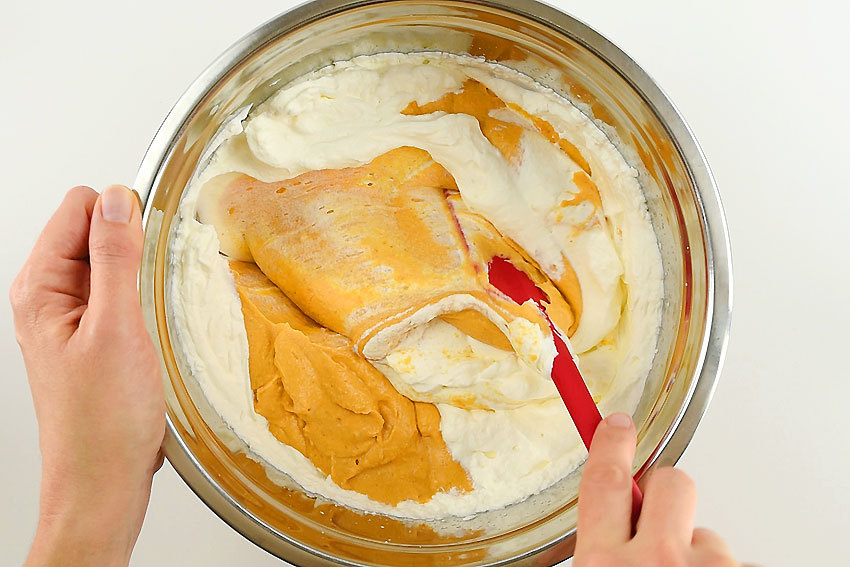 Pour the pumpkin mixture onto the graham crust and use a spatula to smooth out the top. 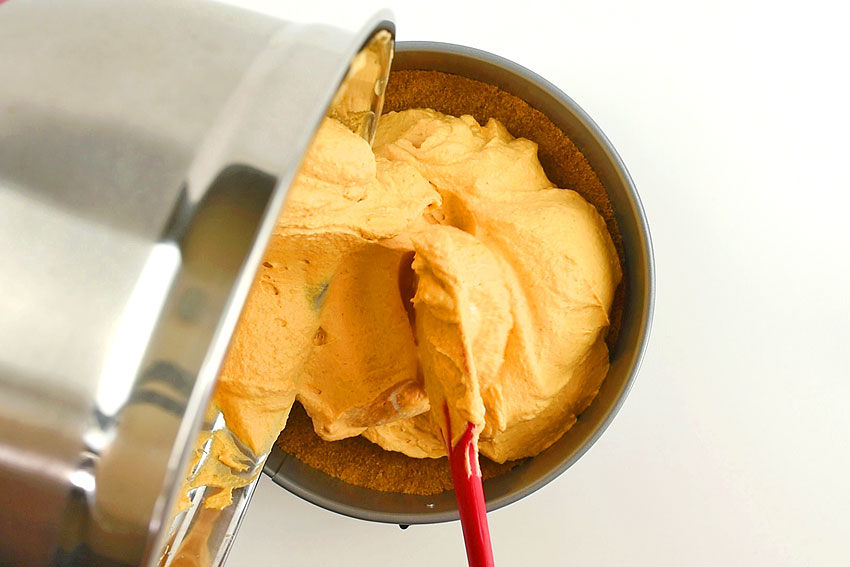 Leave your cheesecake in the refrigerator overnight or chill for at least 3-4 hours. If you don’t chill it for long enough, it might be too runny. And no one wants a runny cheesecake.

If for some reason you have issues that your cheesecake isn’t setting, just pop it into the freezer for about 20 minutes before you serve it. Mine came out of the pan without any issues. And it lasted on the plate for a good hour before starting to lose it’s shape. (Remember, I have to take photographs, so the food we make sits on a plate for quite awhile while I take the pictures for this website). 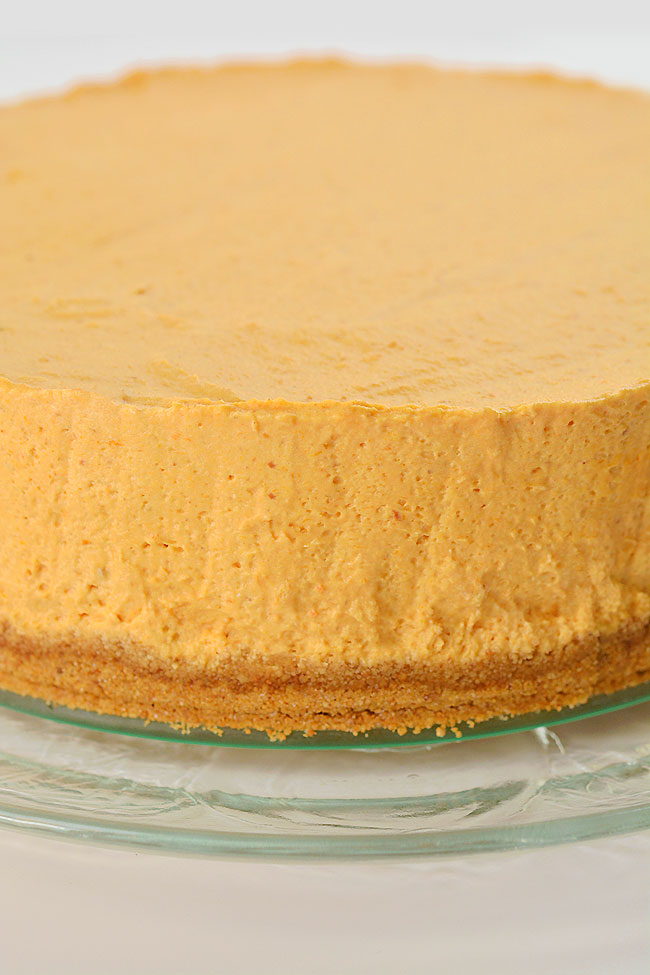 Doesn’t that cake edge look like creamy deliciousness!? I used a butter knife to gently cut around the edge of the springform pan before I popped it off. I just wanted to separate the cheescake from the pan so that it would release as cleanly as possible.

Add some whipped cream and sprinkle on some cinnamon or pumpkin spice. In the photo below, we sprinkled pumpkin pie spice. 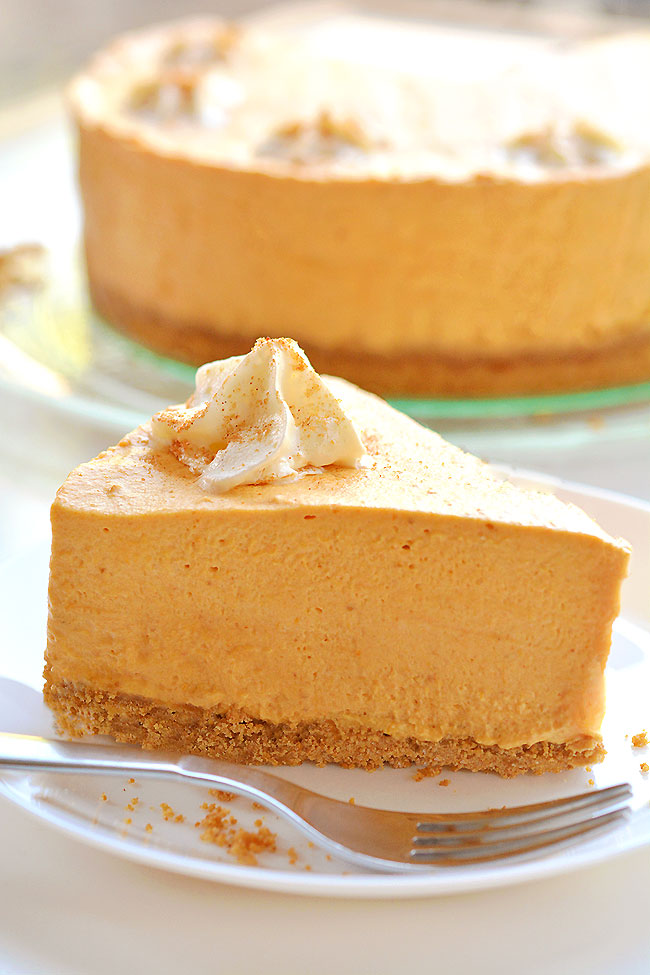 Doesn’t this look SO good?! I promise you – IT IS! This cheesecake has all the best flavours of fall and it’s so creamy, light and fluffy! It’s such a satisfying and simple dessert for the season! 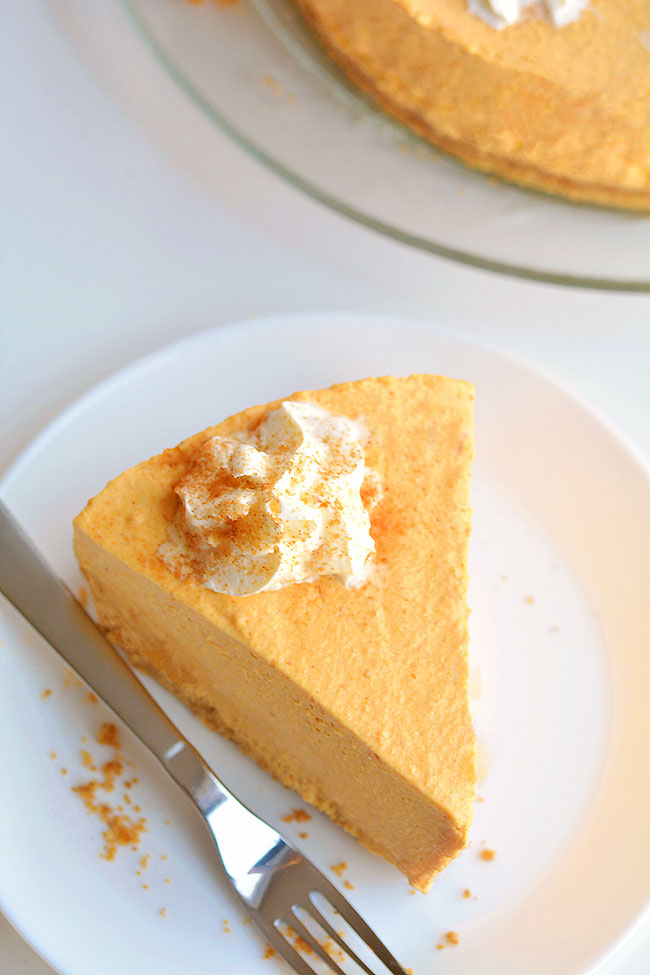 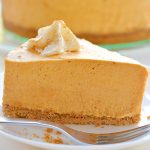 If you don't have pumpkin pie spice you can substitute the following spices instead: 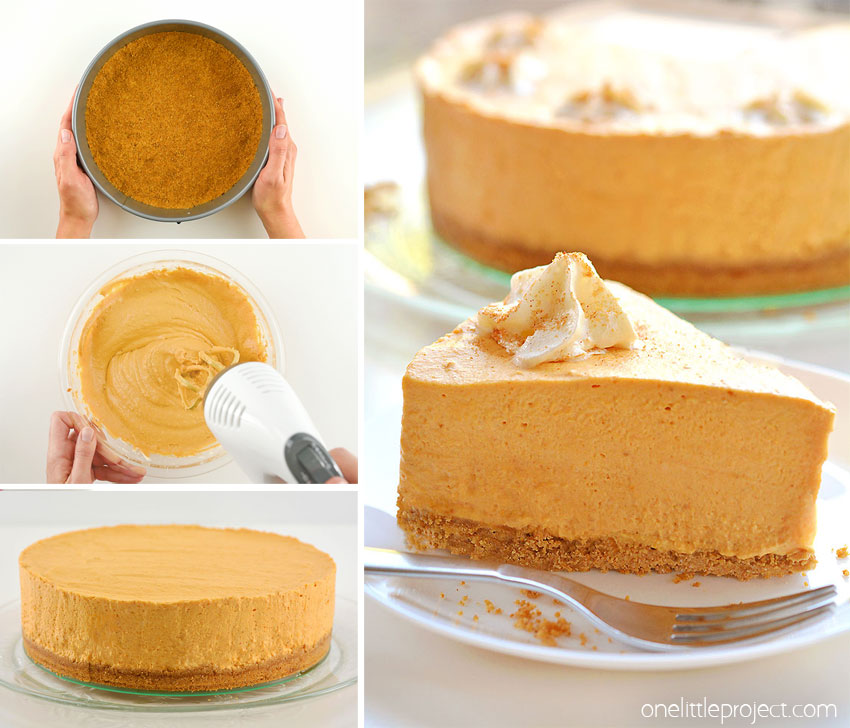 This no-bake pumpkin cheesecake is SO GOOD and it’s really simple to make! It’s so creamy and delicious! Loaded with all the best fall flavours, it’s sure to become one of your favourite fall recipes. This is such an easy no-bake Thanksgiving dessert idea. With a delicious graham cracker crust, and the light and fluffy pumpkin filling, this easy dessert is so perfect for autumn! 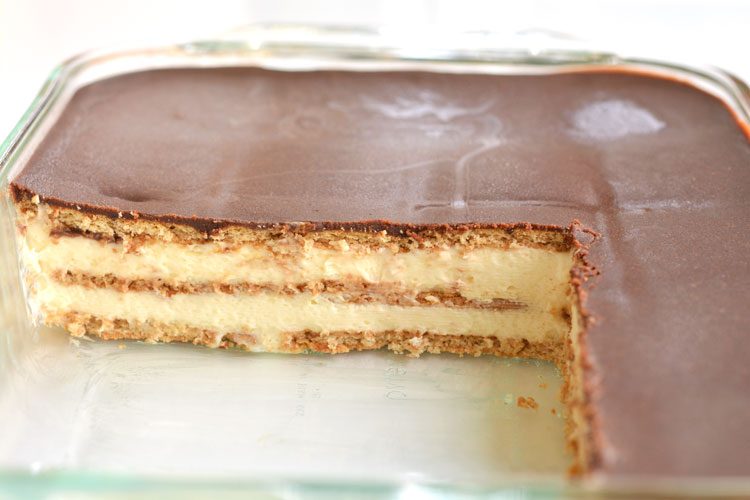 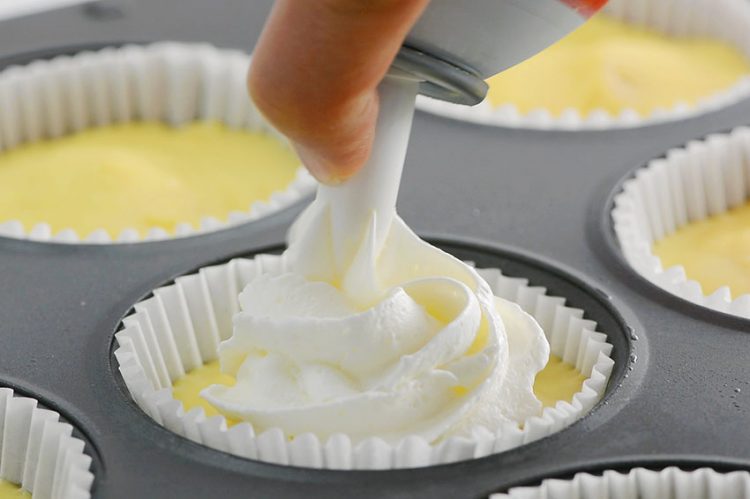 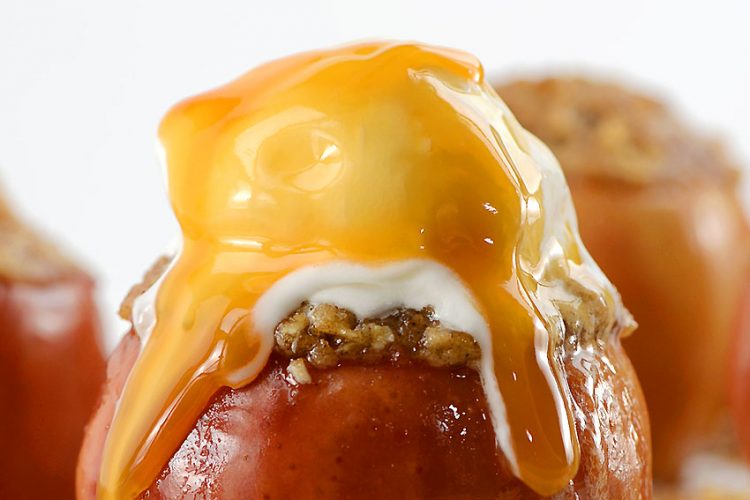 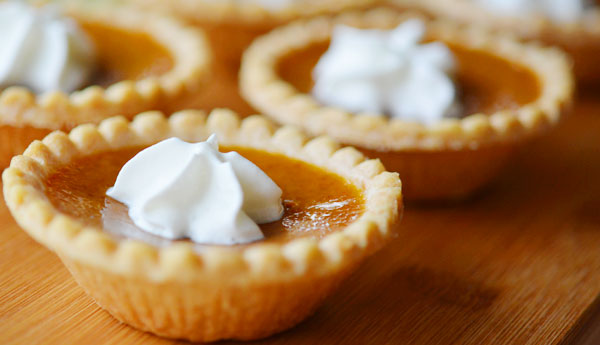 Check out our book Low-Mess Crafts for Kids for 72 fun and simple craft ideas for kids! The projects are fun, easy and most importantly low-mess, so the clean up is simple!