END_OF_DOCUMENT_TOKEN_TO_BE_REPLACED

Mini pumpkin pies!  You know that feeling you get at the end of a big meal, when everyone has eaten way too much?  And then someone suggests dessert, but you don’t even want to get up to make coffee, let alone put together everyone’s dessert plate.  (Or is that just me?)

When you finally do get the energy to serve the 3 beautiful desserts that someone went to tons of effort to make, everyone is so full that they don’t eat more than a few bites.

The solution?   Mini pumpkin pies!  Rather than overwhelming yourself and your guests with too much of a good thing, let them enjoy a bite sized treat.  There’s always room for something mini! 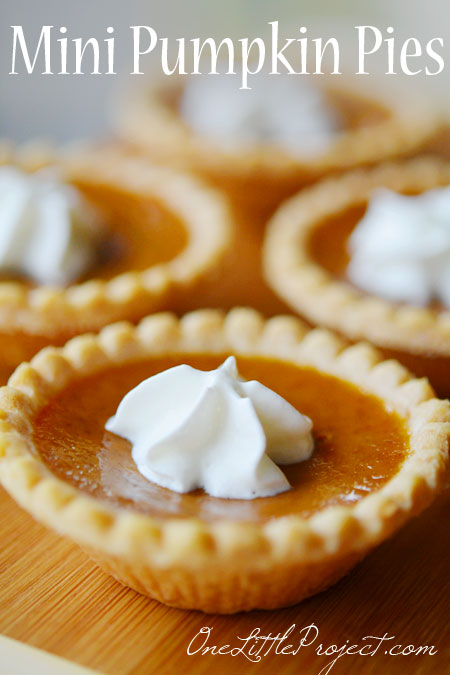 This is the combination of spices that my family has always used for pumpkin pie, and it has always been delicious!

It’s so simple so make your own pumpkin spice – and you probably already have the spices in your cupboard! 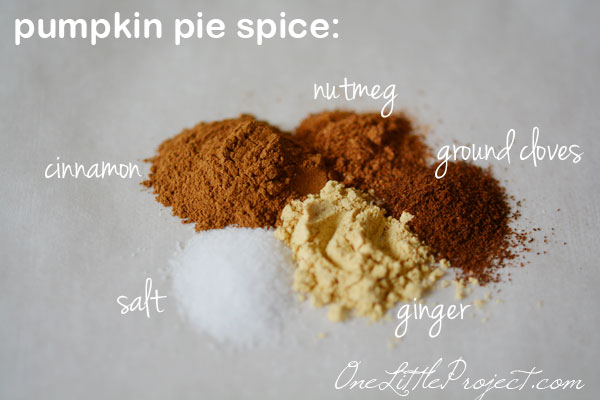 Tip: Add some pumpkin pie spice to strong coffee with some cream and sugar to make your own pumpkin spice latte.  You can add canned pumpkin if you want, but it’s not necessary.

These mini pumpkin pies are unique enough that they don’t have to be limited to Thanksgiving.  I love that they could just as well be served at a brunch or dinner party, or even Christmas.  I definitely recommend giving them a try!

Check out our video for how to make mini pumpkin pies:

If you’re looking for more delicious pumpkin desserts, here’s a few of our favourites:

How to Make Mini Pumpkin Pies: 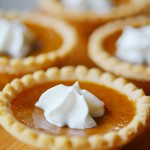 These mini pumpkin pies are way easier than making a pumpkin pie from scratch. Plus you will actually have room to try more than one dessert!
Prep Time15 mins
Cook Time30 mins
Total Time45 mins
Course: Dessert
Servings: 30

I found my mini tart shells at a grocery store in Canada called Loblaws. They are located in the frozen food section right next to the regular pie crusts.

Adapted from the recipe on my mom’s old pie plate 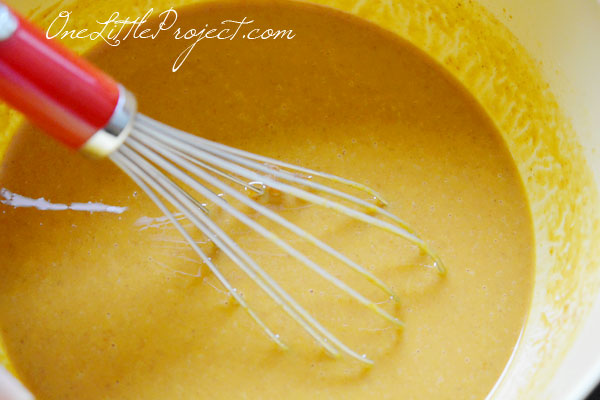 I know this is cheating, but using pre-made tart shells is so much easier than rolling out your own dough.  And they end up looking so perfect in the end!  This momma does not have time to be rolling out 30 tart shells. 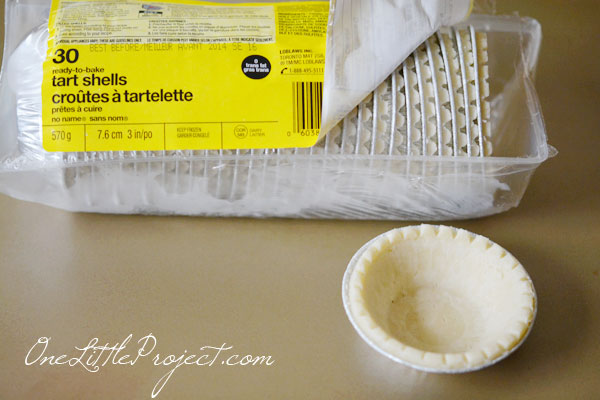 Pour 2 Tablespoons of pumpkin pie mixture into each tart shell: 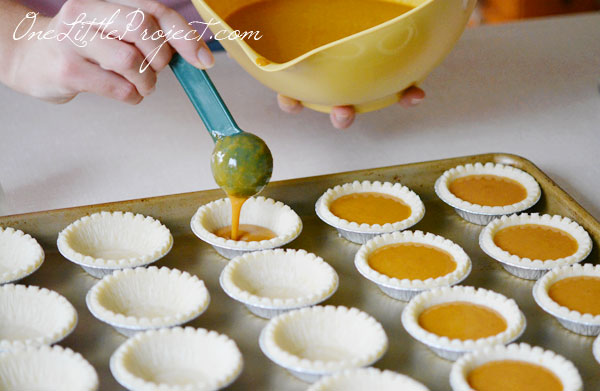 Here they are before they went into the oven: 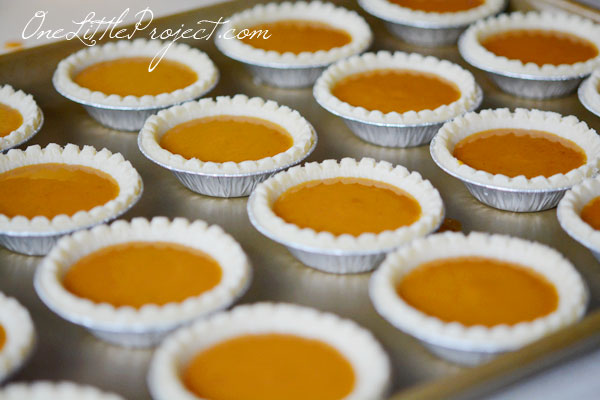 I baked them at 375F for 30 minutes.  They puffed up a little bit, but they collapsed really quickly after they cooled off. 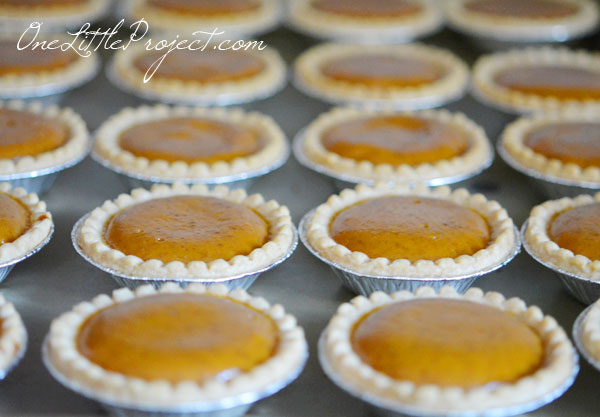 Do you remember those pie plates that had the recipe written right on the plate?  My mom had one for pumpkin pie

, and it was truly the most delicious pumpkin pie I’ve ever had. I’ll be honest though – the past few years (…or ten years…) life has been too busy to make a pumpkin pie from scratch, so we have been buying them from Costco.  *gasp* I know… 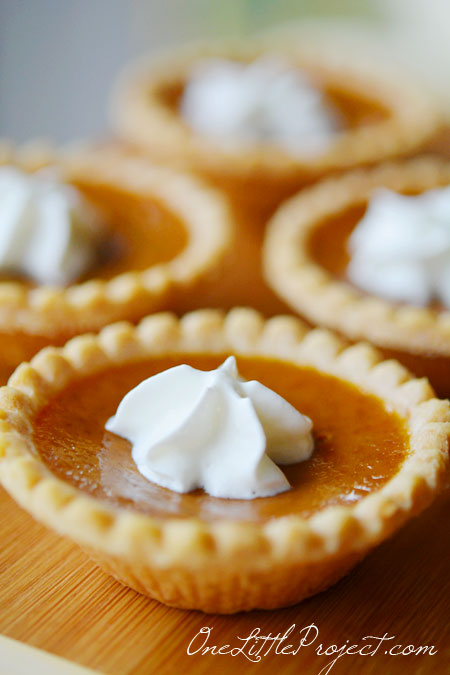 One of the reasons I stopped making homemade pumpkin pie (besides being busy of course), is that it makes such a huge amount and such a thick pumpkin pie, that it’s hard to get through the whole thing.  I love pumpkin pie, but I find it a very strong flavour and enjoy having it in smaller amounts, rather than a giant piece that makes you so full that you swear you won’t eat anything else for days. 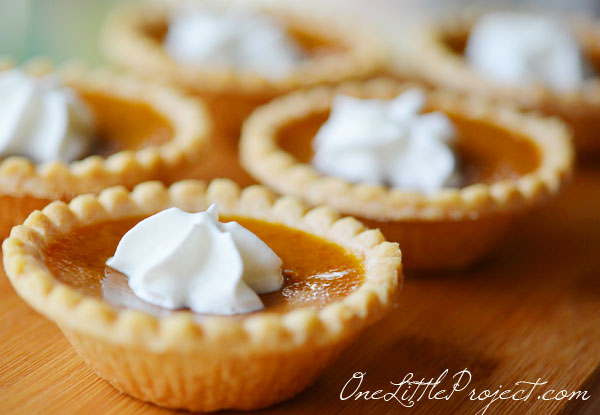 Which is why I love the idea of mini pumpkin pies.  These were seriously delicious!  Way faster to make than rolling out your own dough, but they still have the homemade taste that you just can’t buy in any store bought pumpkin pie. 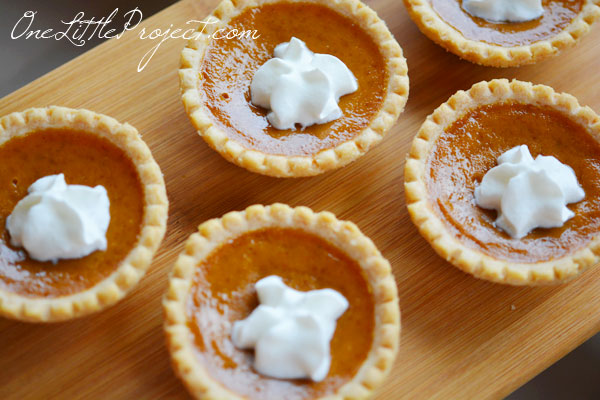 These were way easier than I was expecting.  I have convinced myself for years that pumpkin pie from scratch was too time consuming to make but these were done in less than an hour, and most of that was baking time!