END_OF_DOCUMENT_TOKEN_TO_BE_REPLACED

Have you seen that amazing pin floating around on Pinterest that shows someone holding a magical, glowing fairy jar? Here’s a link to the pin so you can check it out for yourself. It shows glitter that appears to be floating around in the MIDDLE of the jar. I’m going to go out on a limb here and say it was probably very heavily photoshopped, but it was still inspiring, either way!

It’s been on our bucket list for ages and we finally tested it out for ourselves on the weekend! Today I’m going to show you exactly what happens when you pour a glow stick into a mason jar with some glitter. It wasn’t quite as “magical” as the photos where the glitter appears to be floating in mid air (those are SO not real), but it was pretty darn cool nonetheless! It was really easy to make and so pretty to look at! Not to mention, when I told the kids it was supposed to be fairies in a jar, it made it so much fun for them!

Am I the only person who asks those silly questions like, “Hey, how do you clean this up when you’re done?” or “Hey, is glow stick liquid toxic!??!!?!?”. I’ll feel a lot better if we talk about those for just a quick second…

My research says no. Feel free to Google it for yourself if you’re feeling uneasy. Glow stick liquid is no more dangerous than most household cleaners. That doesn’t mean you should be careless with it. Try not to get the glow stick liquid on your skin since it could cause irritation (just like household cleaners could cause irritation to your skin). If you get some on your skin, wash it off thoroughly with water.

How Do You Clean this Up?

This is a bit more tricky. You can’t pour glow sticks down the drain. And you can’t recycle the mason jars if they have the chemicals (and glitter for that matter…) in them. When you’re done with your fairy jars, empty the glow stick liquid from the mason jars onto a few layers of paper towel.

Then (and you might want to wear rubber gloves for this), carefully wipe out the glitter from the jar with a paper towel. Be careful since there will also be broken glass from the broken glow stick in the jar. Dispose of the dirty paper towels in a plastic bag, then put the plastic bag into your regular garbage. Then you can recycle the mason jars or thoroughly clean them for another craft. It’s not exactly the easiest clean up, but it’s not THAT bad.

Phew! Okay, now that those are out of the way, let’s move on to the tutorial!

Fairies in a Jar Tutorial

I used the fat glow sticks that come in packages of 4 at the dollar store. They come with little butterflies that attach to them, or stars that turn them into magic wands. Don’t use the skinny glow sticks for this – you’ll need too many and it’s way harder to get the liquid out.

I only used one fat glow stick per jar and I thought it was plenty bright. You can add 2 glow sticks if you like, but there’s really no need in my opinion. 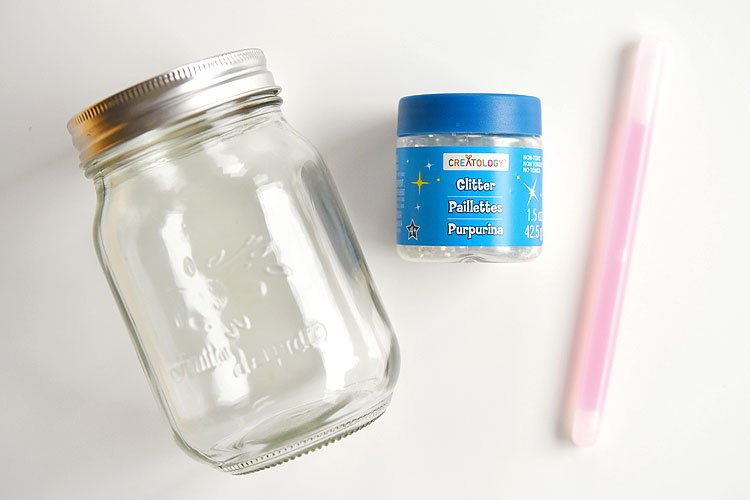 Bend the glow stick and give it a good shake to fully activate it and make it glow. 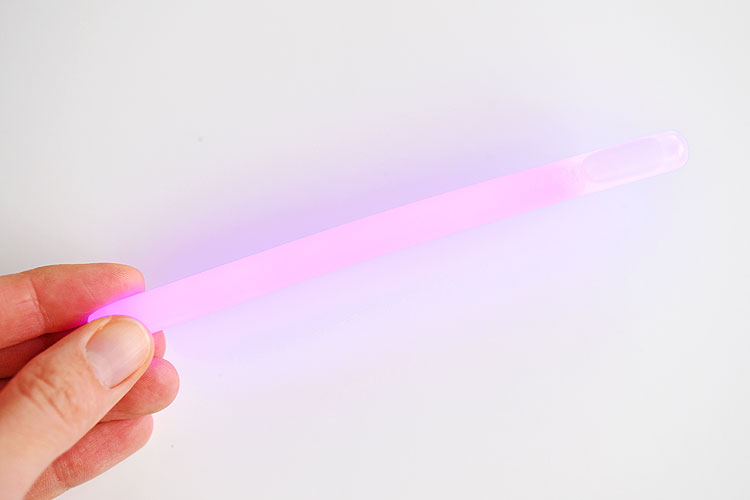 Keep some paper towel nearby so you can wipe off the scissors and any drips you might make. 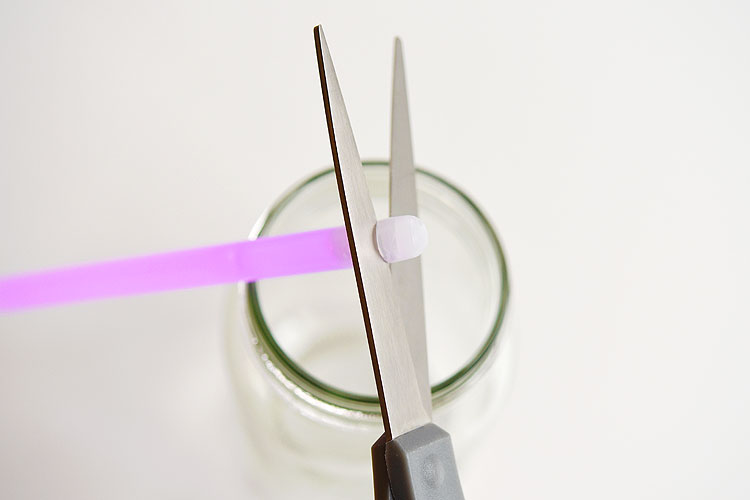 Bend back the end (preferably using the scissors, not your fingers) and pour out the contents into the jar.

Throw the empty glow stick in the garbage. 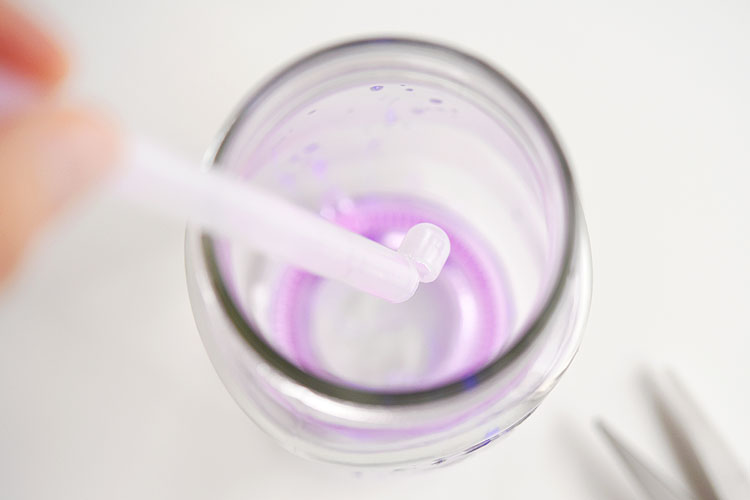 Pour a generous amount of glitter into the mason jar. You’ll need enough so that it coats the inside of the jar. 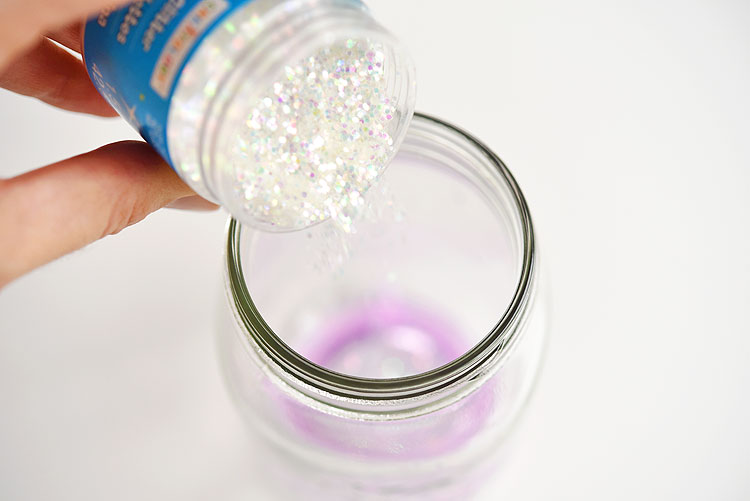 Put the lid back on, and shake the jar vigorously to coat the sides of the jar with glitter.

At this point, I was still in the daylight on top of a white surface, and I couldn’t see the glow at all… 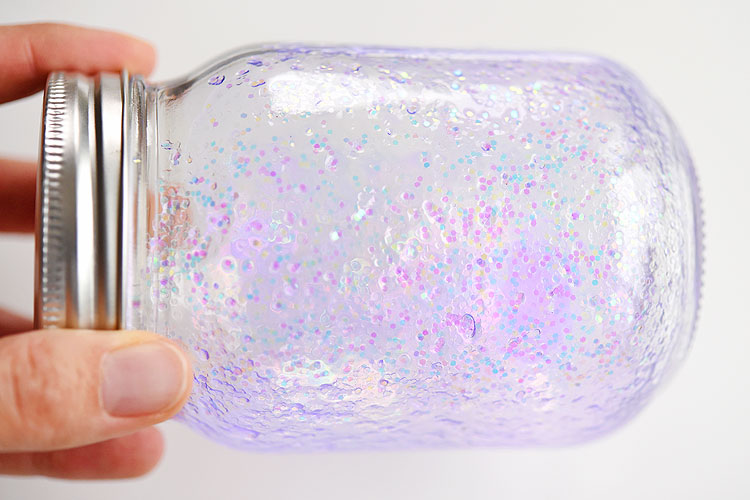 But as soon as I went into a dark room, it looked so cool!! 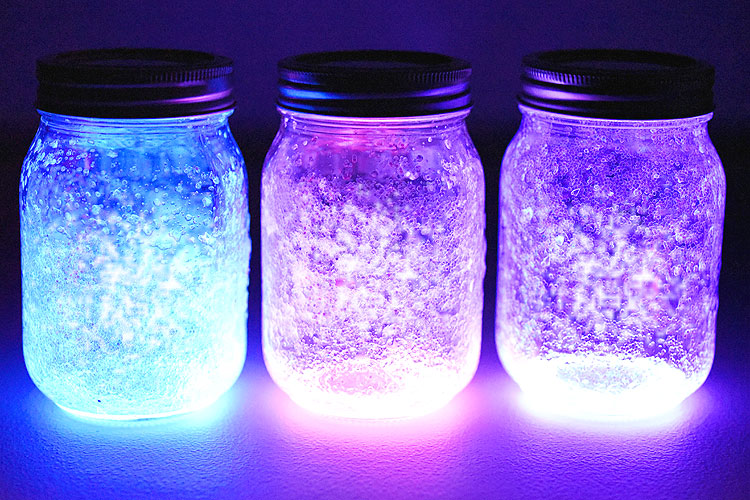 They really do glow beautifully!

From what I can tell, the iridescent glitter reflects the light (like a bunch of tiny mirrors) and makes the jar glow brighter. 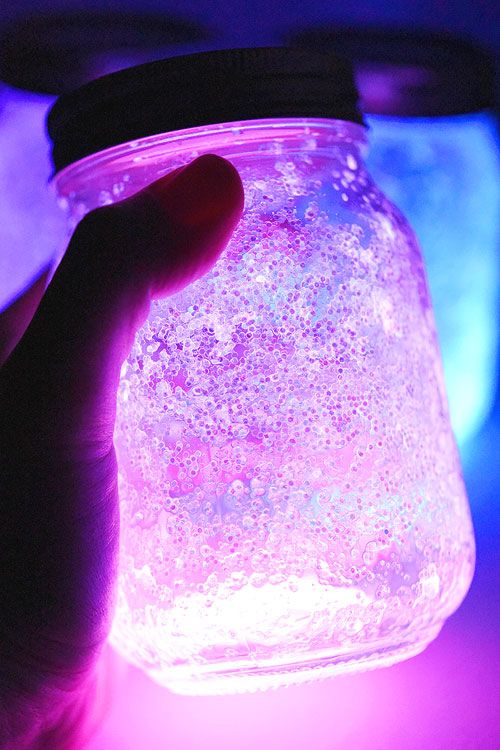 The glitter also gave it a really cool “frosted” look.

You need to make sure you use clear/iridescent glitter. If it’s opaque glitter, the glitter will block the light and it won’t shine as bright. 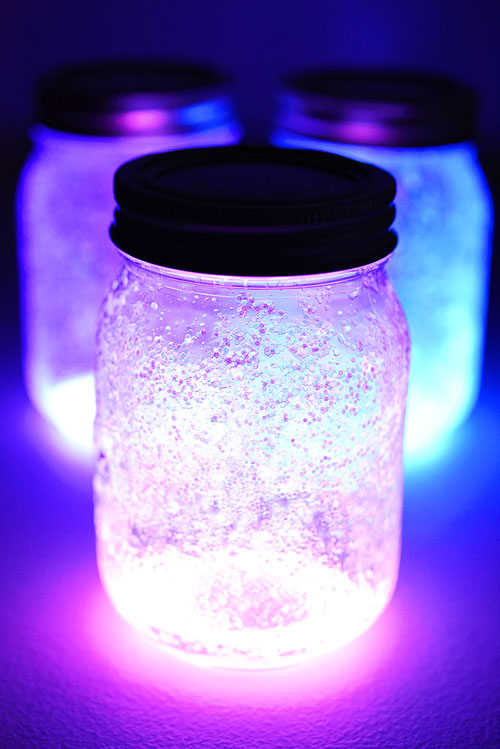 I was a little disappointed that our fairy jars only glowed for about an hour or two. But with kids, that’s longer than their attention span, so my kids were able to get plenty of enjoyment out of their jars.

I’ve read other blogs of people who have tried this and some have had theirs last up to 8 hours. So maybe dollar store glow sticks aren’t as strong? Or maybe they’ll last longer if you add 2 glow sticks to the jar? Just don’t expect the jars to glow for as long as a glow stick glows. 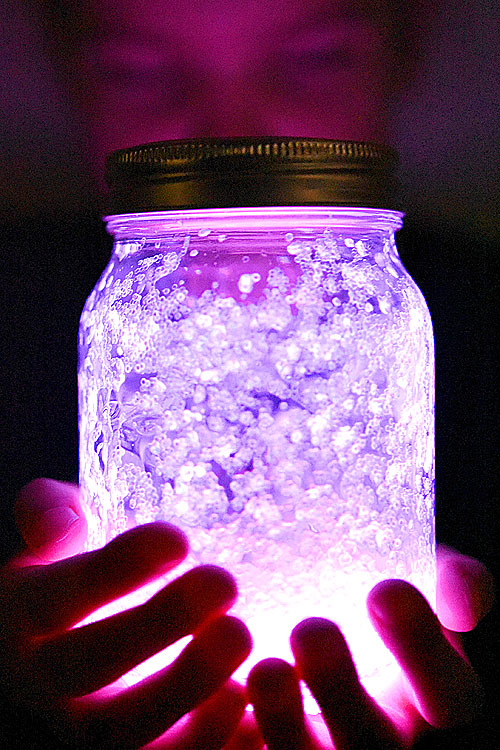 My 6 year old was so happy to help with these! Although, I guess technically I didn’t really let her “help” because I didn’t want her getting any glow stick liquid on her. But she stood by and watched closely, asking to help with every single step. Poor thing. At least she got to play with them! 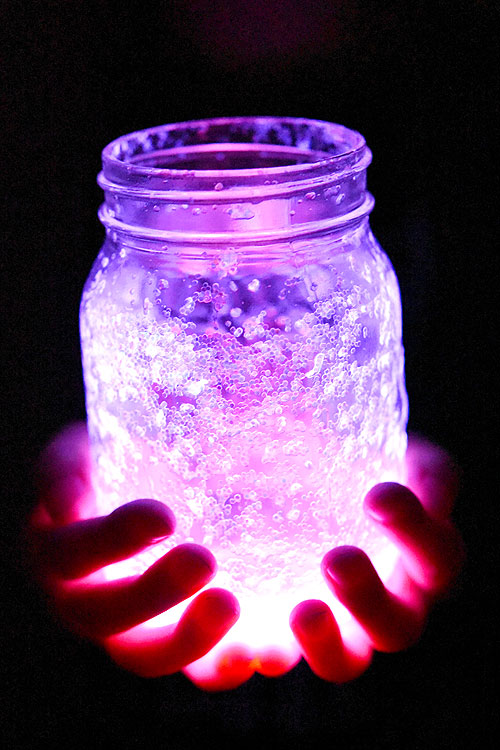 They really are fun to make and so cool to look at! The glitter glows so beautifully! 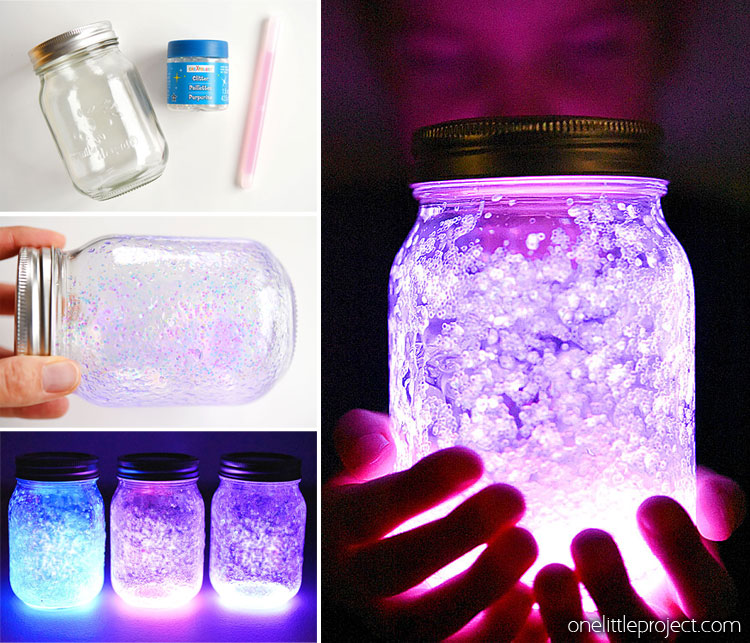 These fairy jars are so easy to make and they look SO COOL! All you need is a glow stick, glitter and a mason jar and you can capture your own twinkling fairies in a jar! This is such a great glow stick idea and a super easy kids activity!

If you’re looking for more fun craft ideas to make using glow sticks, check out our pop bottle fireflies. These are so simple to make and so fun for the kids to play with! 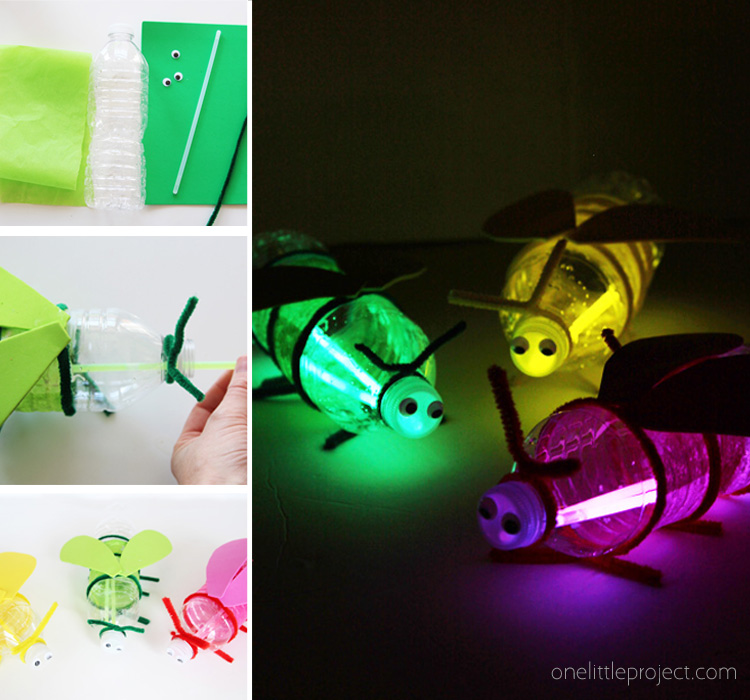