END_OF_DOCUMENT_TOKEN_TO_BE_REPLACED

Have you ever found an awesome idea on Pinterest, and thought to yourself, “I can definitely make that!” only to fail miserably? This was one of those times for me.

I tried to make an easy looking Halloween treat, but I struggled with it every step of the way. This project was out to get me. Does anyone else get irritated when things don’t work out? I was getting so mad as I made this!

Maybe I should have given up, but like a train wreck, I just couldn’t stop! And in the end, I came up with something new – chocolate covered banana ghosts – and they are, well… I’m not sure what they are? Weird? Funny looking? Lucky for me, Halloween is all about things being bizarre, so even though I’m kind of embarrassed about the calamity of errors here, I’m going to show you how they turned out.

This is the story of this week’s Pinterest failure.

Once upon a time, there was a blogger who didn’t bother reading the instructions for how to make something. I’ll admit, that was obviously a bad move. I just didn’t think I’d need directions to make these!

I found these frozen banana ghosts on Pinterest and they seemed easy enough. 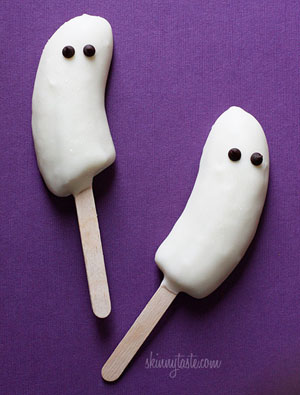 They are just bananas on a stick, covered in white chocolate, with two mini chocolate chip eyes. I mean, don’t you look at that photo and think, “Yes! That’s easy! I can make that!” 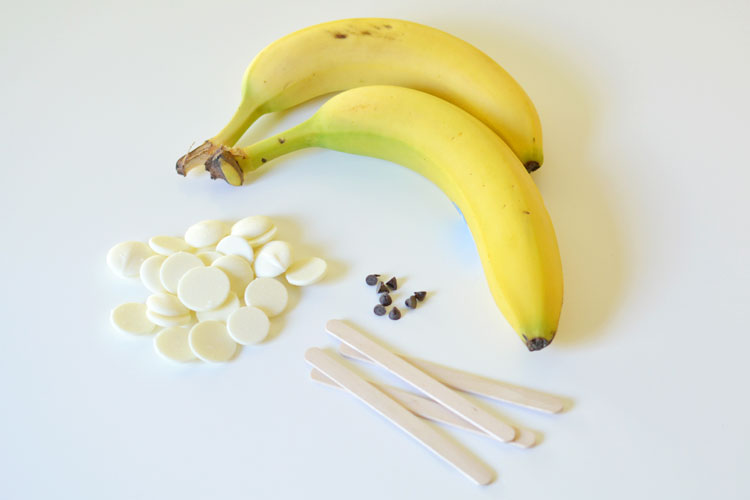 Nope! In typical Pinterest fashion, I just went by the series of photos in the pin rather than reading the blog post that went along with it. Afterall, why read, when you are given a short series of photos to work from? 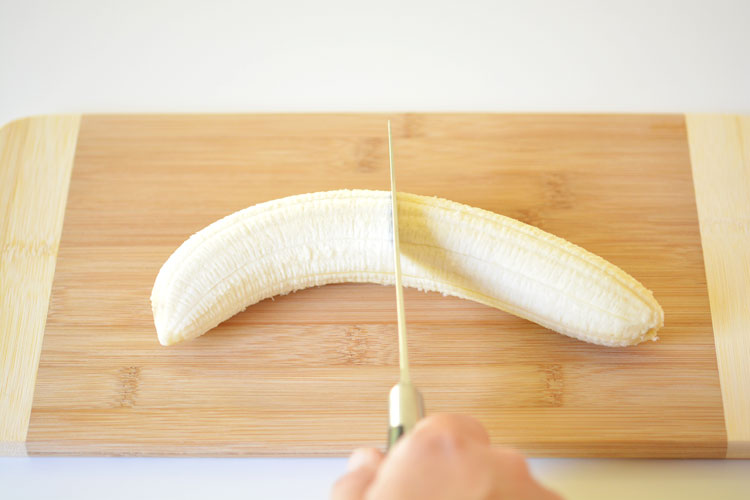 So I cut the banana in half, and then I cut it in half again. 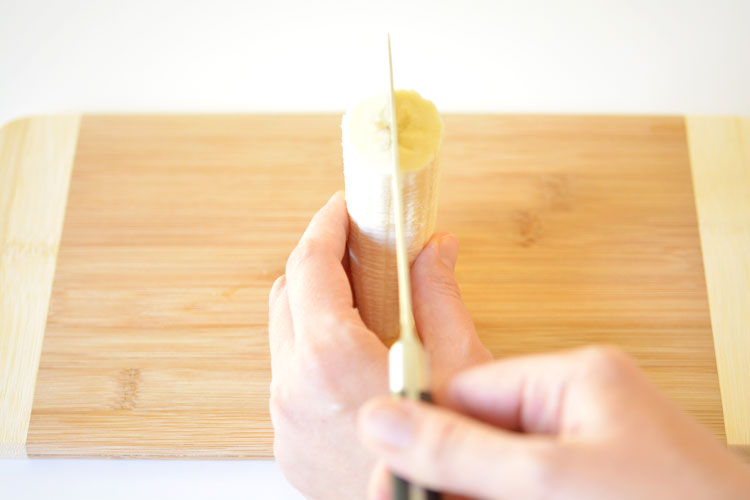 The first time I tried making these I burned the chocolate. It PAINED me to throw all that chocolate away. I was crying inside, and my heart hurt. But it was completely unusable after I burned it. (Picture this photo, but with the chocolate around the edges melted, and the center completely brown.) 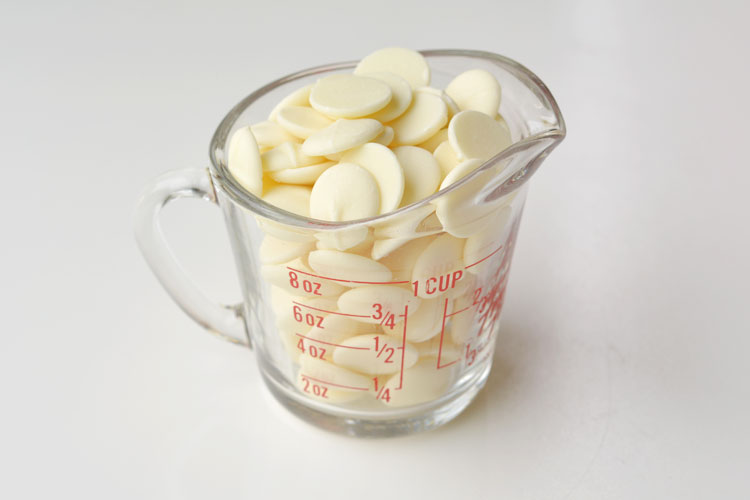 I added about two tablespoons of oil to help thin out the chocolate. I’ve done this many times to help give the chocolate a smoother finish, but it ended up being way too much oil and it was way too thin. I must have only added 1 Tablespoon of oil the other times? Grrrr… 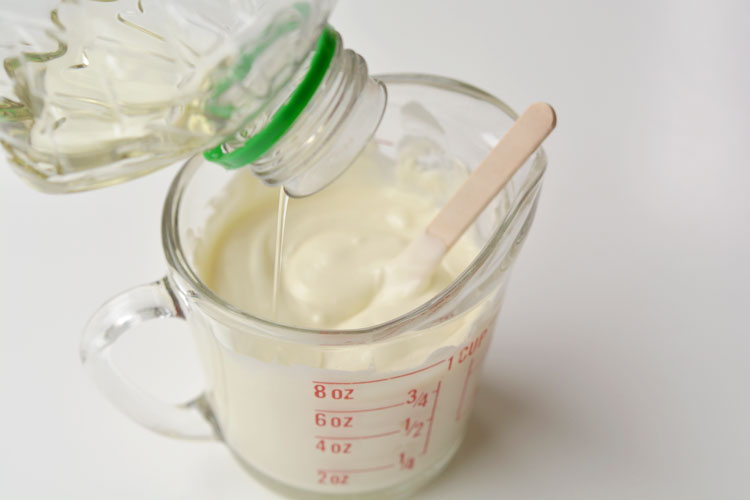 I dipped the popsicle stick in chocolate and tried poking it into the end of the banana, but the banana piece wasn’t thick enough and it kept breaking. (I ate a lot of banana pieces that day). Not to mention, banana is slippery. The stick is NOT going to stay put in a fresh banana. Not. Going. To. Happen. 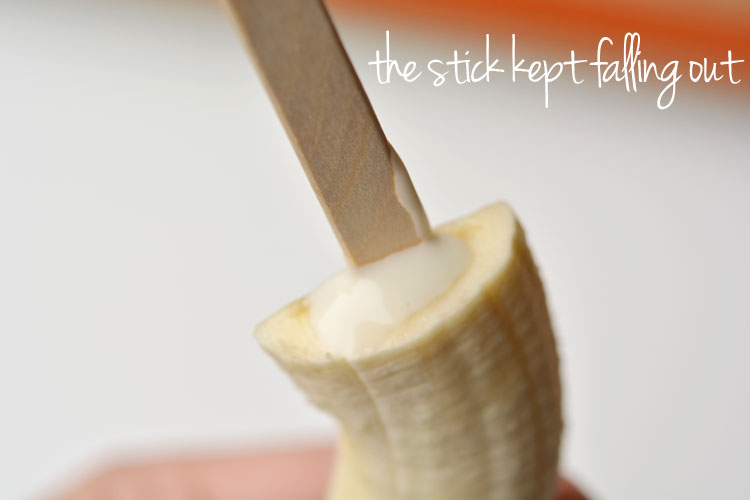 Then I tried dipping the long, cracked banana into the too-thin liquid chocolate. Do you think the banana stayed on the stick? Nope! 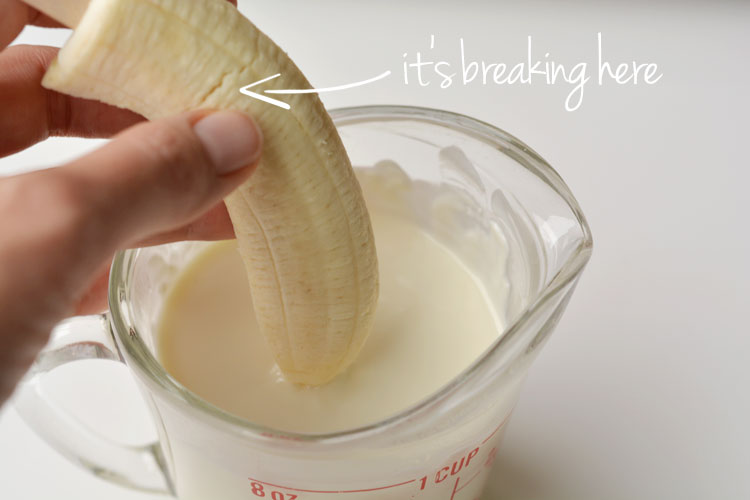 I thought maybe if I trimmed down the banana pieces it would work better. 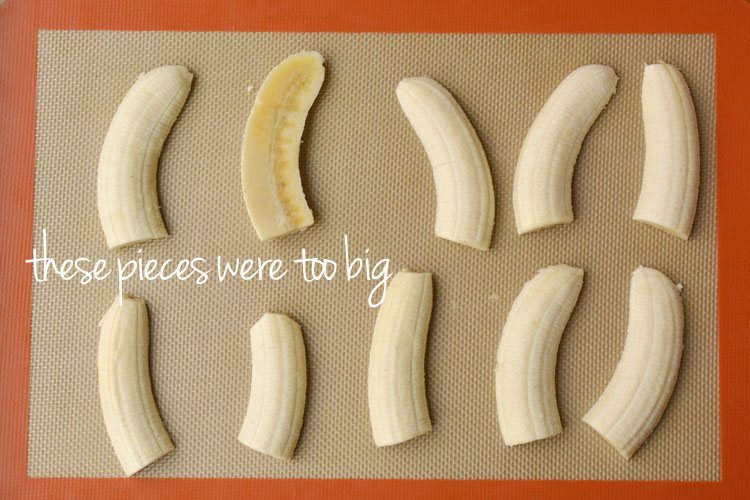 So I tried smaller pieces instead. But the slippery little banana pieces kept falling off the stick. It pained me AGAIN, but I had to abandon the idea of using the popsicle stick. 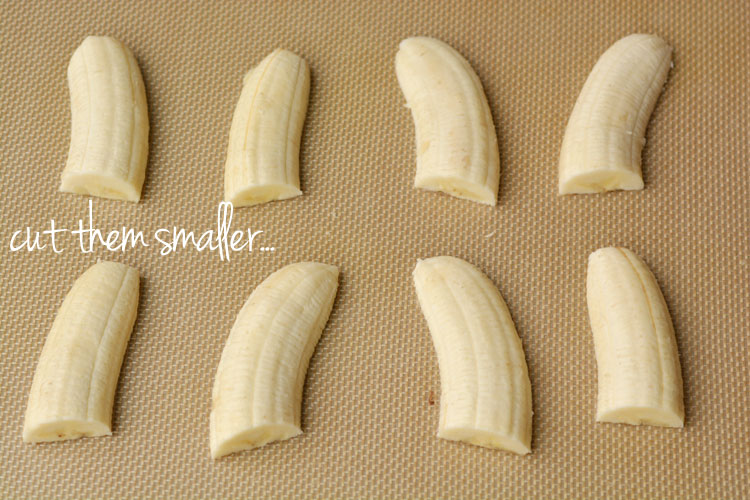 I was fuming inside. I had someone over to help watch the kids so I could get some work done, and while I was fiddling with the banana pieces, I kept thinking over and over, “she’s going to think I’m crazy!”

I wasn’t willing to waste two cups of white chocolate melts so I kept going. I thought maybe I could salvage the treat by dipping the banana directly into the chocolate without the stick. 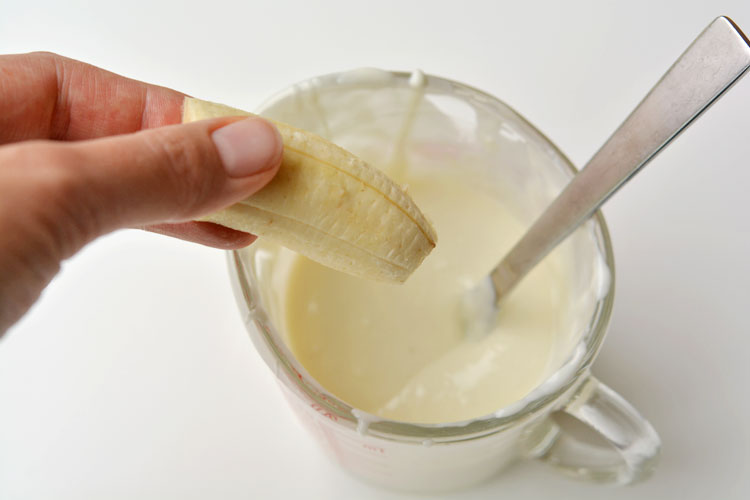 Except, I had added so much oil to the chocolate, that it barely stuck to the banana and mostly dripped off the edges. So that forced me to run with the goopy messiness and turn these funny looking pieces into ghosts. I generously spooned the chocolate over the bottoms of the banana pieces to give them a ghost shape. 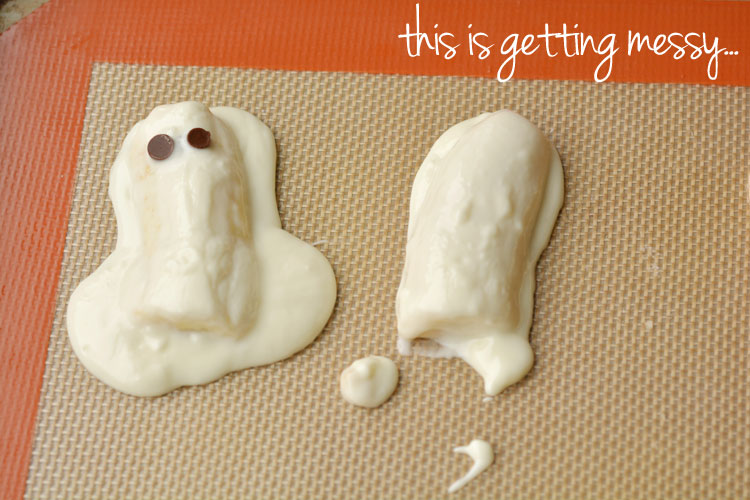 They looked funny. Some of them were ghost shaped. And others were, well… let’s just say they conjured up some not-exactly-PG-13 imagery now that I go back and look at these photos. Oops!

And the eyes were supposed to be mini chocolate chips. I tried poking the pointy end of the chips into the banana but again, the darn banana was too slippery, and I couldn’t get them to stick. 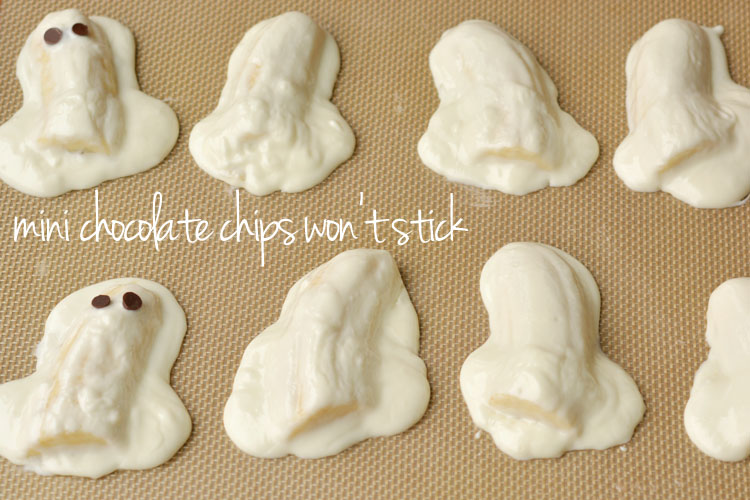 So I abandoned mini chocolate chips and used brown M&M’s instead. Which worked reasonably well, except some of the M&M’s slid off while they hardened in the freezer. 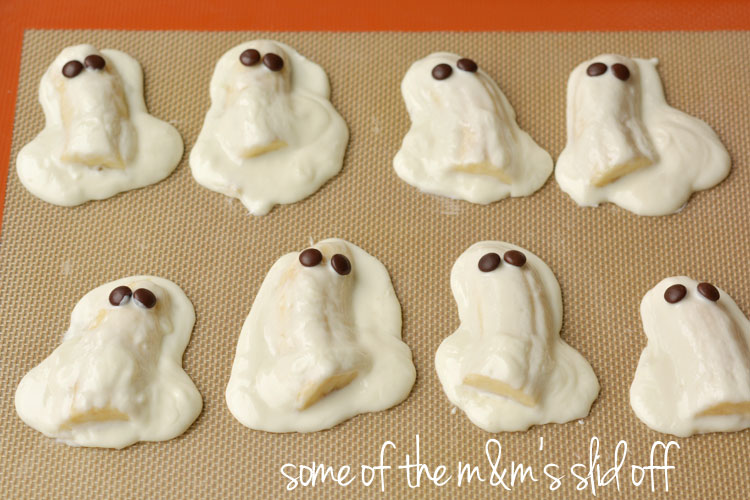 So I went from having 12 pieces of banana, to having 6 usable ghosts. I’m not overly confident about using the word “usable” here, but this was the absolute best I could do. 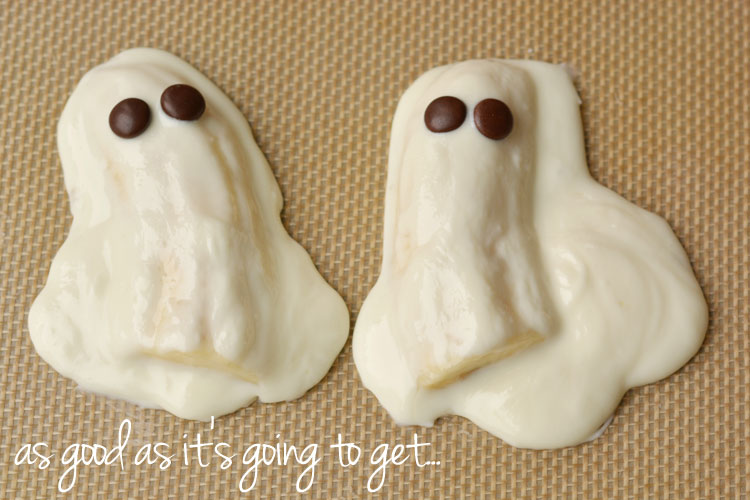 So, what do you think? Are these completely ridiculous? 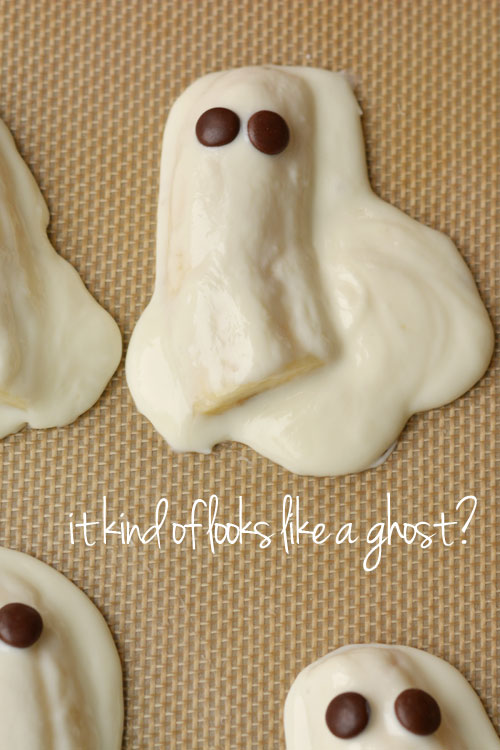 I considered hiding all the photos for this project on a password protected, secret hard drive so no one would ever know about them. But I decided to be brave and just post them for your mocking enjoyment. 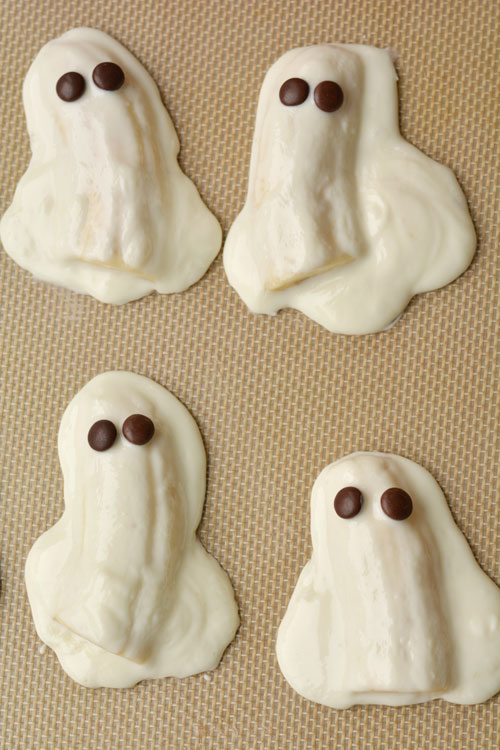 I put them in the freezer to harden up. They were just too messy otherwise. 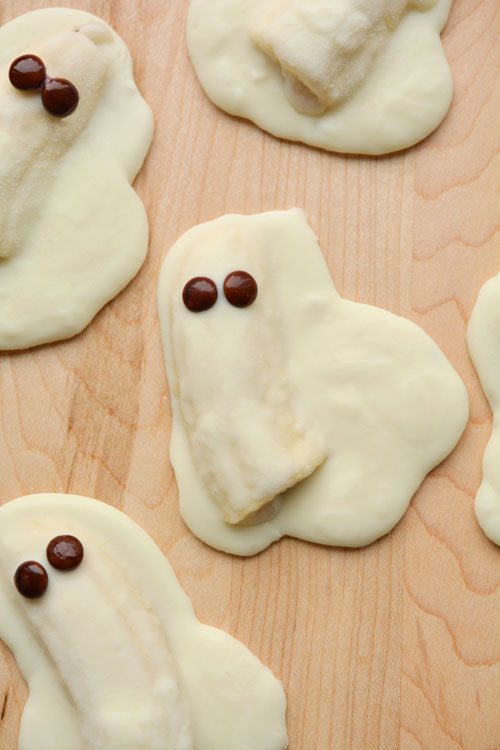 Come on, are they growing on you yet?! I mean, if you squint, they are kind of cute? 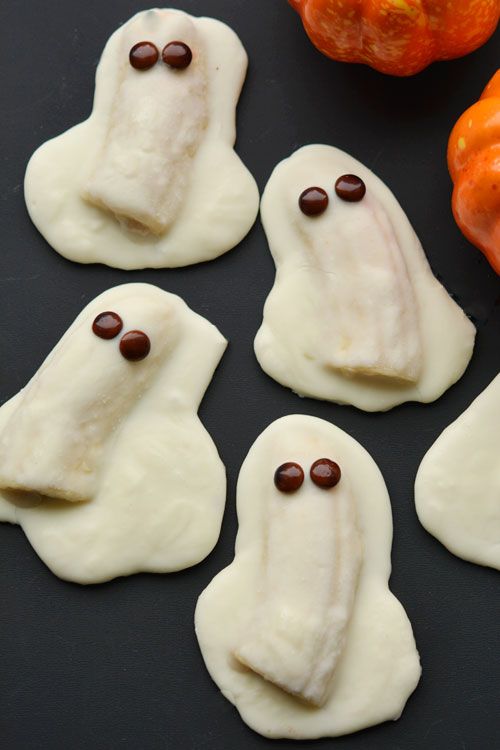 I’ll admit it. This was not a shining moment for me. I was so annoyed by the whole process! 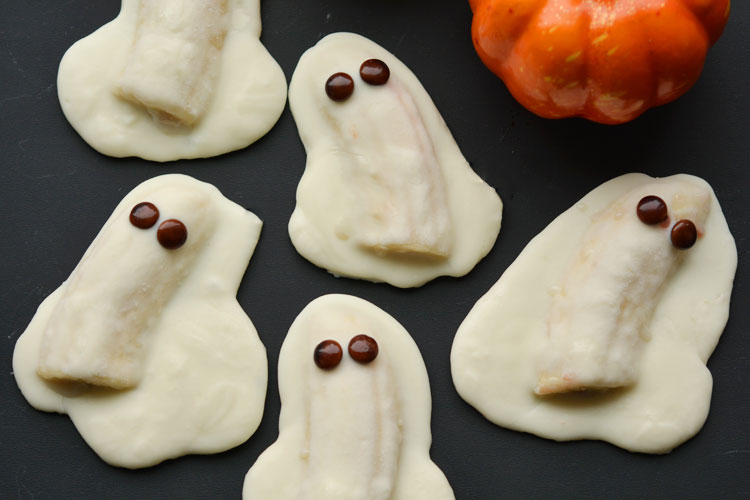 But the one, positive thing I have to say about these? They are freaking DELICIOUS. Bananas and chocolate?! Mmmmm… : ) 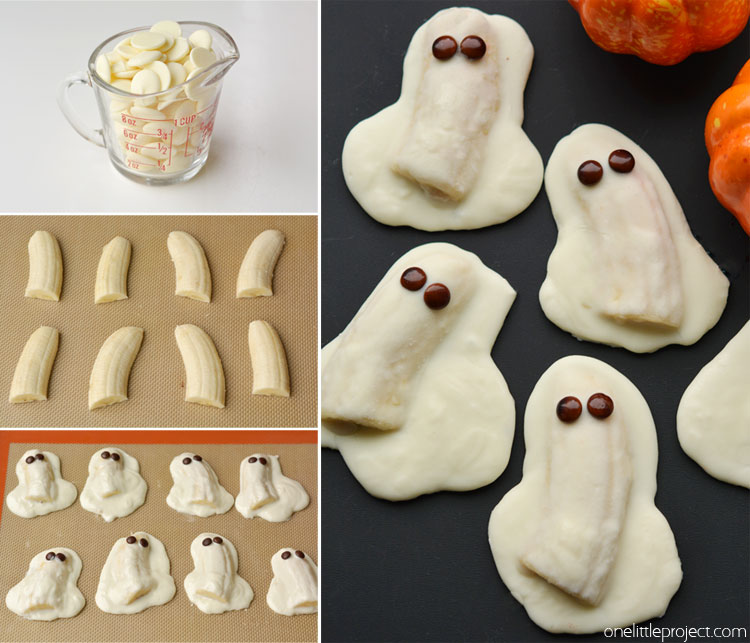 Make these chocolate banana ghosts with caution. Don’t make the same mistakes I did. And above all else, if you just skipped to the end, and didn’t bother reading anything I wrote here, then good luck to you! ; )