These chocolate covered pumpkin pretzels are amazing!  And they are really easy to make.  I never thought chocolate covered pretzels would taste so good.  The pretzel spider webs I made last week were good, but these were so much more tasty… Apparently if you completely coat something in chocolate, it really helps with the delicious factor! 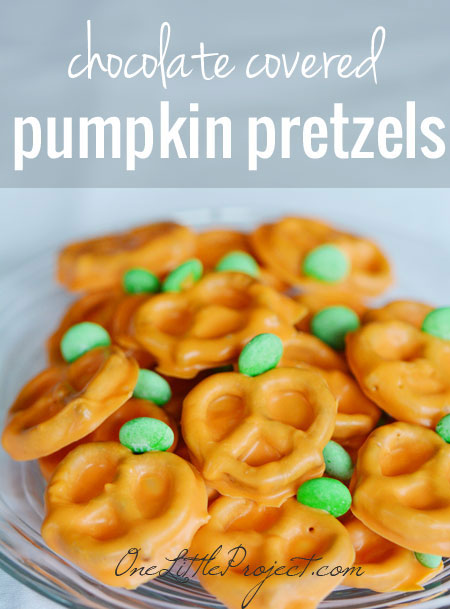 I wasn’t sure how many of these I was going to make, so I just picked up a small amount of everything from the bulk store.  M&M’s needs to come up with a better way to buy individual colours of their candies.  I ended up getting scolded for picking out the green M&M’s… yes… apparently I am THAT person. 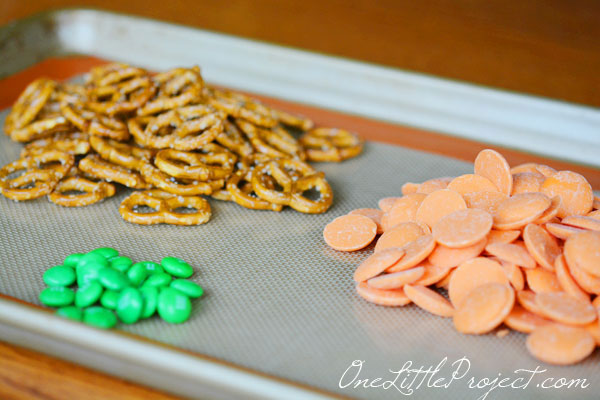 Rather than dying my own chocolate I just used orange Merckens

.  I never thought I was a fan of Merckens chocolate, but the last few things I’ve made with them have been really good! 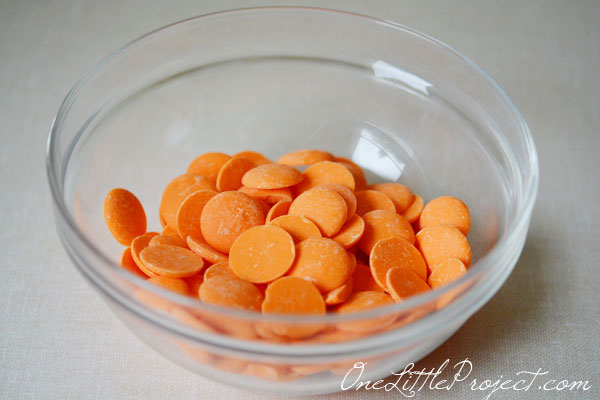 I melted the chocolate the same way I did for the Pretzel Spider Web Treats. Two minutes in the microwave at a time at super low power.  It ended up taking about 5 minutes total until all the lumps were melted away. 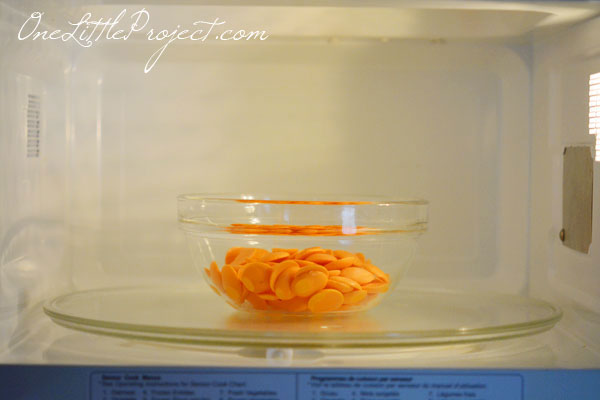 One problem with chocolate, is that if you dip the pretzel in directly, the chocolate is so thick that it will cover the whole pretzel, kind of hiding the fact that it is a pretzel to begin with. 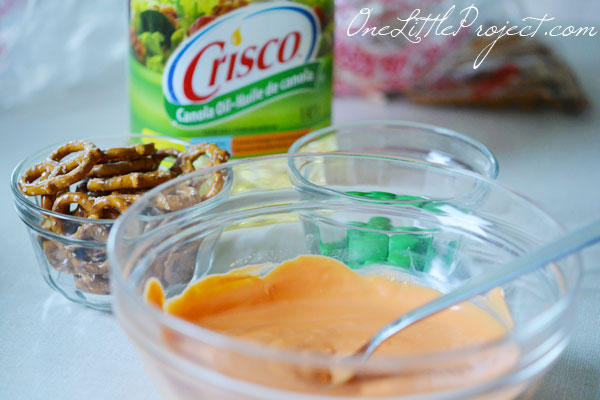 So to thin out the chocolate, I used a little bit of canola oil.  I don’t know exactly how much chocolate I had, but hopefully you can judge by the amount I showed above. 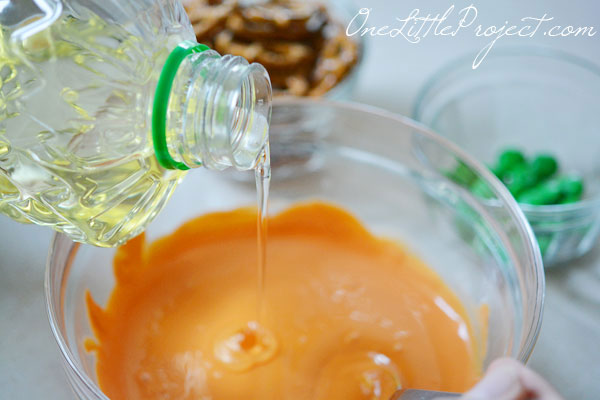 I added about 1 Tablespoon of oil until it got to the right consistency.  It should easily drizzle off the spoon like in the photo below: 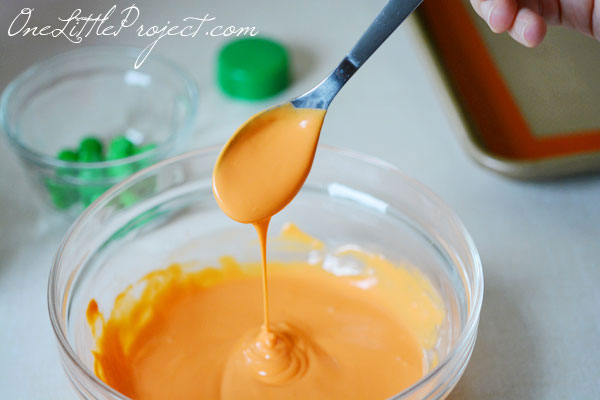 Dip the pretzel in the chocolate.  After I made a few I had about 5 or 6 going in the bowl at once and just used a toothpick to stir them up.

The toothpick also came in really handy for removing them from the bowl of chocolate: 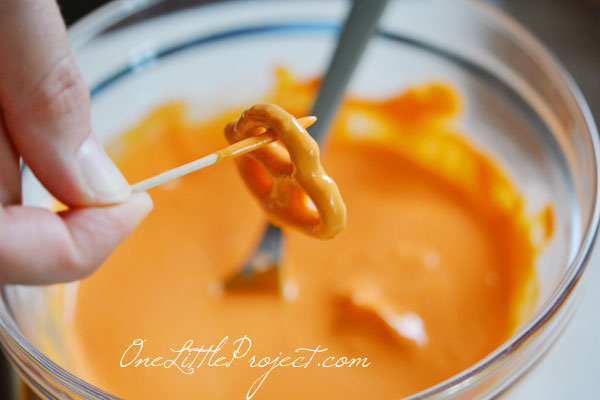 Then place the chocolate covered pretzel on a baking sheet.  Waxed paper would probably work, but just like for the Pretzel Spider Web Treats I used my Silpat non-stick baking mat 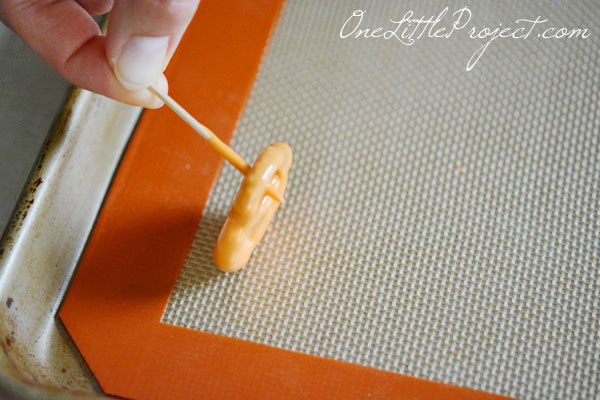 Place a green M&M at the top for the stem.  Good old amazon sells everything… apparently even green M&M’s 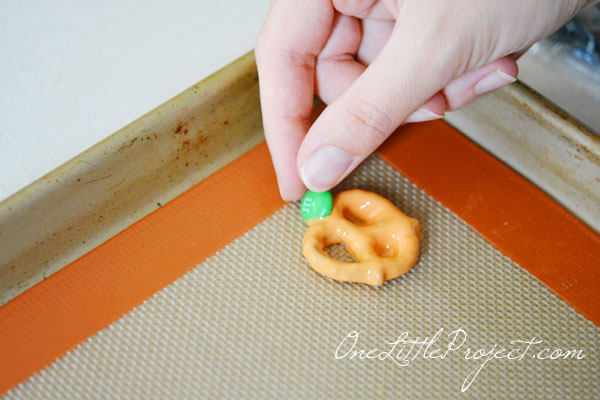 They were so pretty lined up on the baking sheet!  I put them in the fridge to help speed up the hardening, but I don’t really recommend doing that.  (It kind of made my M&M’s get a white fog on them.)  They will harden up just fine on the counter. 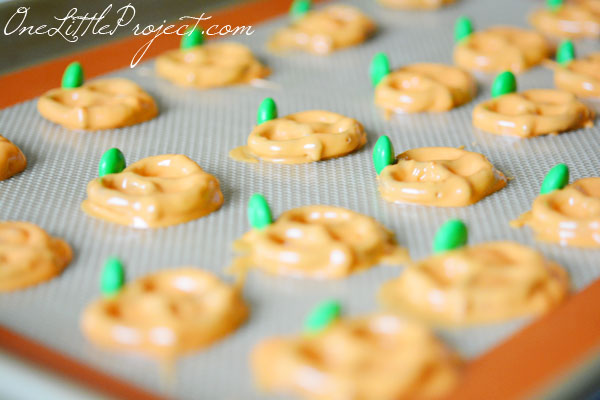 See how easy they just peel off the Silpat?  I definitely recommend using a Silpat baking mat 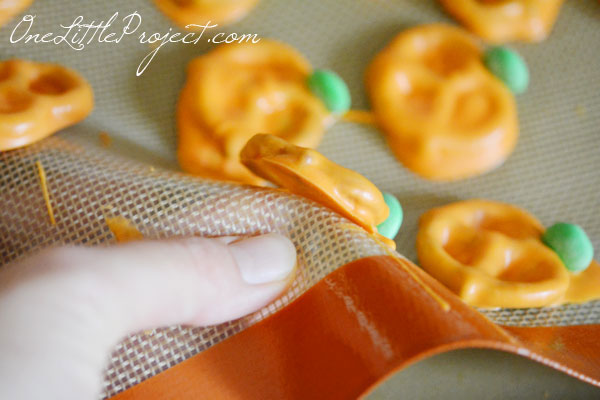 As I said above, these were delicious!  And they were actually really easy to make too.  I will definitely be making them again.  Even if Halloween passes, they are just that good!  Surely I can come up with a Christmas themed chocolate covered pretzel.  🙂 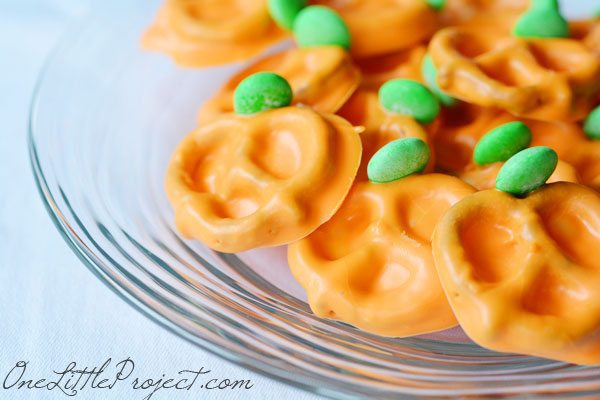 I am definitely not the first person to try these.  They must really appeal to people!  Check out these blogs to see how their chocolate covered pumpkins turned out: