END_OF_DOCUMENT_TOKEN_TO_BE_REPLACED

Did anyone ever tell you that having three kids was easy? “If you have two, three kids is no different.” Or “Any more than two kids and it’s only logistics,” I would often hear.

These parents deceived me.

So I happily entered into my third pregnancy thinking life would go on as usual.  Then when I was six months pregnant with my third, one of my mommy neighbours was rushing past our driveway frazzled, walking her three kids to school. (Or maybe I was the frazzled one?) 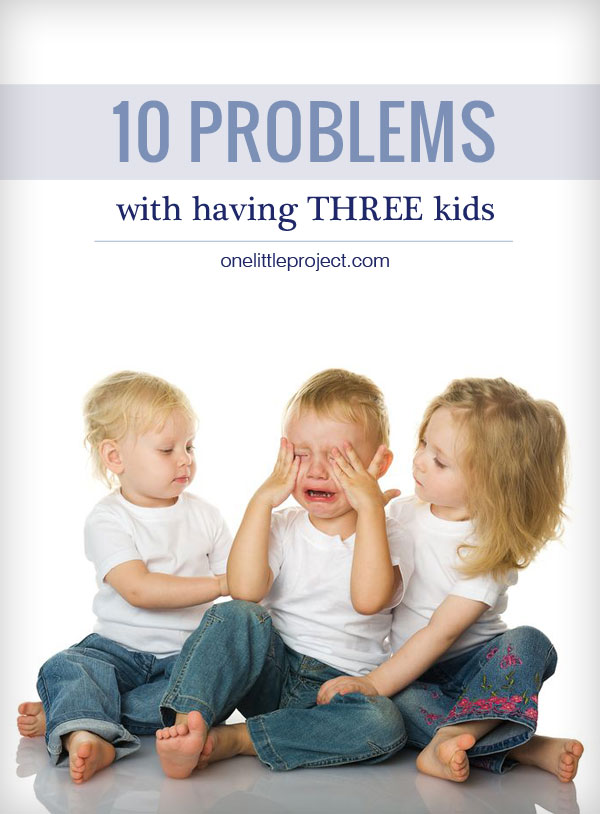 And then dead serious, she finally spoke the truth that no one had ever told me: “Don’t believe what anyone else says.  When you have your third child, your life will be turned upside down.”  I stopped in my tracks as I was buckling my fussy two year old into our brand new minivan. Was she telling the truth? Surely all those other parents couldn’t be wrong? How much harder could it possibly be?

Here are the 10 problems with having three (or more) kids:

Problem #1: You only have two arms.

Clearly I need to hold the new baby. But toddlers are sensitive little creatures, and when the terrible two’s kick in, I need to hold my two year old too. And then of course my kindergartner gets jealous. Then what? Tears. Chaos. Tantrums. You can’t win that battle!

Problem #2: The other kids will wake up at night too.

My older girls used to sleep through the night like champions. But enter the emotional stress of adding a baby brother to the mix, and now they take turns either wetting the bed, or screaming bloody murder at random times throughout the night. And just as your newborn starts to settle into a routine of only waking up twice a night, your toddler will decide it’s the perfect time to start waking up at 5am. Lovely.

Deal with it, because that’s not even the worst part. You’ll also need to accept that you have two older children who are going to turn your brand new minivan into a disaster within a week.  Who on earth thought that black was a good standard colour for the interior of a minivan?  Your van will never be clean.  Ever.

Problem #4: And speaking of being clean…

Once upon a time I used to shower regularly. I smelled nice. My hair was neatly done. Heck, I even used a blow dryer. Now, I’m lucky if I get to eat breakfast let alone fit in a quick shower. And I’m not the only one in the family with this problem. It takes a LONG time to bathe three kids under five. You aren’t going to do it every day. In fact, I think it’s a successful week if we’ve managed to bathe them at least once. I can only cling to the hope that my kids get bathed more than the kids in their class who come from families with four kids.

My two year old used to be lovely. An angel. The sweetest, most charming child I’d ever seen. That was when she was the youngest. Now she’s a middle child and life is full of DRAMA. The iPad battery died? Tantrum! I can’t hold her in my arms because I need both my hands to make dinner? Screams! She can’t have a bandaid because there is no injury in sight? It’s the end of the world! All. Day. Long. The Jekyll and Hyde transformation is a very real thing folks!

Problem #6: Someone is getting neglected.

I want to be a helicopter parent, I really do.  Just like I want to not find toys in my sock drawer and I want to do the dishes every night… wouldn’t that be a perfect world? I so desperately want to make sure my kids are always safe, and well fed, and happy. But there is simply no time to give as much attention to everyone as I would like. The older kids are going to watch a lot of TV. And they are going to play on the iPad.  A lot. (The iPad is a godsend for nursing moms!)  You are going to need to put toddler food, like boxes of raisins, fish crackers, and fruit snacks on lower shelves in the pantry so they can get their own snacks when you just can’t get up to get one.  And sometimes, you’ll hear your toddler making a noise somewhere in the house, and you are going to have no idea what that noise is. But you are going to continue changing that newborn’s blown out diaper without checking to see whats going on with the toddler, because leaving the baby is just not an option at that moment. *sigh*

Remember with your first baby, when the baby weight seemed to just melt away and you were quickly back in your normal jeans? That doesn’t happen the third time around. Your body gets the message “Oh, I get it, this lady likes to get pregnant, so we might as well give her a buffer of fat for when it happens again.” Doesn’t my body know I have no intention of getting pregnant EVER AGAIN? Get used to your fat pants ladies. It’s going to take some hard work to get yourself back into those skinny jeans.

I remember having a lot of toys when I was growing up. There never seemed to be a shortage. But when I look around my house at the volume of Barbies, and stuffed animals, and mega blocks, and train sets, and crafts, and colouring books, and Little People it’s insane how many toys my kids have. Toys are so cheap these days that every family member feels the need to buy at least two toys for each kid at each holiday.  And the kids can’t possibly appreciate them anymore because there are just SO. MANY. TOYS.

Remember when you had your first baby and you researched all your baby gear and you tried to get the coolest, most in style equipment available on the market? (Or if you are me, the coolest stuff in your price range…) Well, now all that gear is at least five years old. It’s used. It’s dated. It’s just not cool anymore. And since this is the third child and you already have everything you need, you certainly aren’t going to buy anything new. You just can’t justify buying a Mamaroo. And you are going to use the tattered receiving blankets you got for your first baby (even if they aren’t for the right gender), not brand new Aiden and Anais muslin ones. Heck, you might even walk down the street with a Graco stroller. *gasp*

Problem #10: The slightest sentimental thought brings you to tears

You are going to question your decision to have three kids. But then you are going to look at that sweet baby’s face, and he’s going to smile at you for the very first time and it’s not going to matter that it’s 4am. Your Kindergartner is going to come home with crafts from school with the only word she knows how to spell written all over them: “MOMMY” and a bunch of hearts drawn beside that word. It’s going to make you melt. That terrible two year old is going to wrap her arms around your neck and give you the biggest, sweetest hug, and you are going to forget the tantrum she just had. You are going to be moved to tears more than you ever thought possible.