END_OF_DOCUMENT_TOKEN_TO_BE_REPLACED

Making your own finger paint is one of those projects that feels like it should be easy. But for some reason, I had trouble getting this right. It took three tries before I found a recipe that worked! 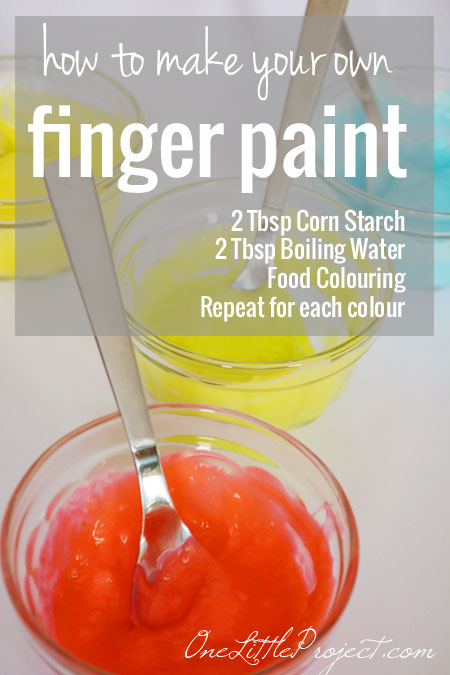 My conclusion is that different brands of corn starch must be made differently. When I used the same amount of corn starch as other recipes recommended my “paint” turned into solid blobs. So if you make this yourself, you’ll have to adjust the amounts of water versus corn starch as necessary. 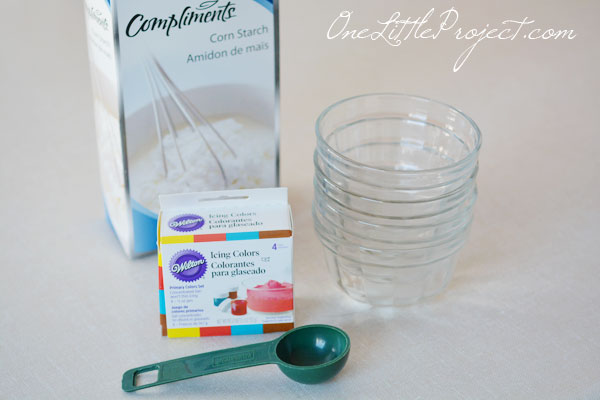 It’s definitely simple to make your own finger paint: 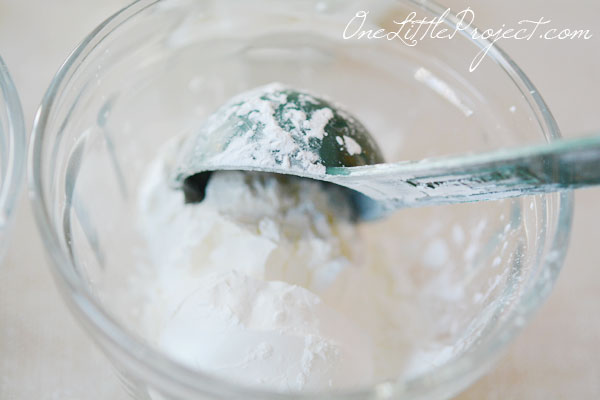 I added boiling water (just from my kettle) until it was the consistency of pudding. 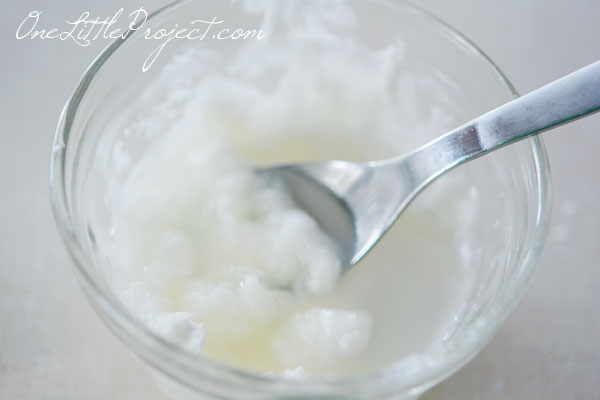 I repeated four times so I could have four different colours. Now you are probably thinking, can’t I just put 8 tablespoons of water in a bowl and add 8 tablespoons of boiling water? I thought that made sense, so I tried it, but it turned into a gelatinous mess. Plus, it cooked the corn starch and the mixture turned clear. I don’t know if that’s a bad thing, but from my three tries, I realized that once the corn starch goes clear, when it cools off it gets too solid to use as finger paint. 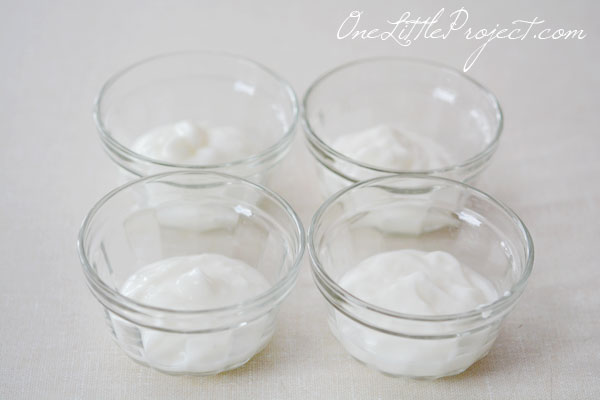 to colour each bowl of finger paint. It barely took any food colouring at all to get bright colours. The tiny glob on the tip of my knife in the photo below was all it needed: 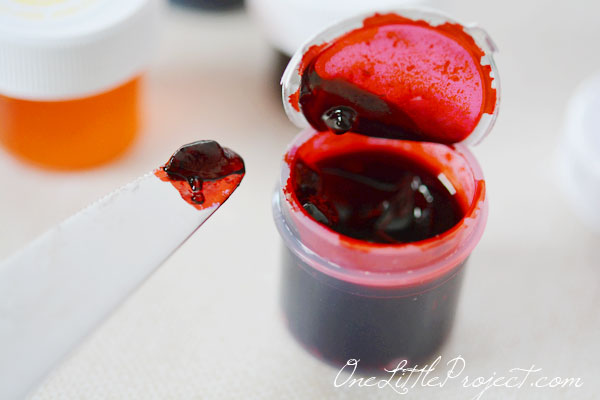 I didn’t want to make them too bright, otherwise they would dye my girls’ hands when they painted. With such a little amount of food colouring their little hands weren’t dyed at all and everyone stayed (reasonably) clean. 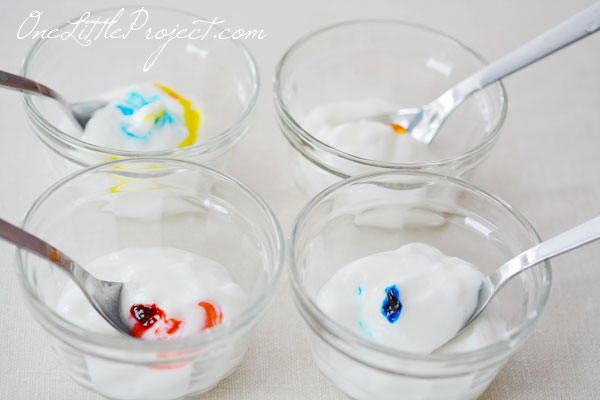 Here are the colours after they were mixed. I probably could have made the green greener, but I find there is a very fine line before you add so much blue that you can’t get it back to green again. 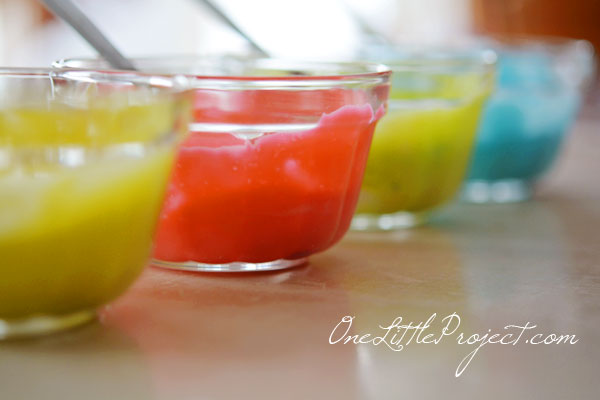 One recipe I tried (which is probably one of the first recipes that comes up if you search for finger paint on Pinterest) recommended adding salt and sugar. But I found that anything other than boiling water and corn starch was completely unnecessary. 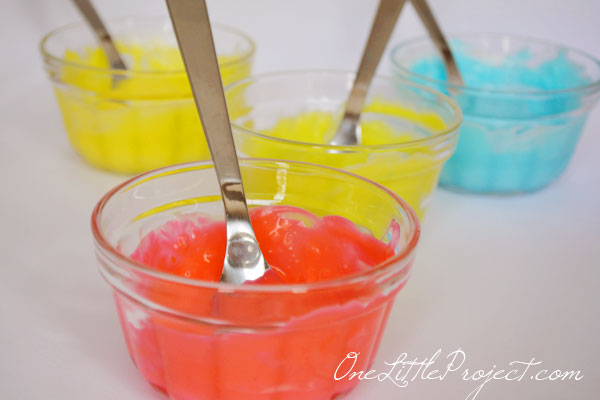 I’m not sure if it’s just my toddler, or all toddlers, but it took some coaxing to convince 19 month old Kate to get her hands dirty. Apparently I’ve done a good job at teaching her not to dip her hands in her bowls of food. 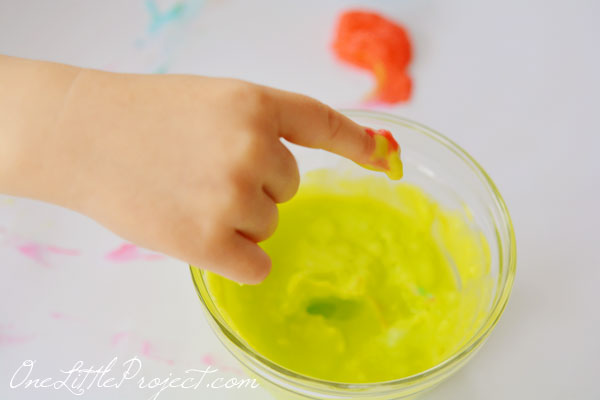 As far as finger paints go, this stuff had a pretty decent consistency. It probably could have been a little thinner, but it worked really well, and it was nice that they couldn’t spill it anywhere. 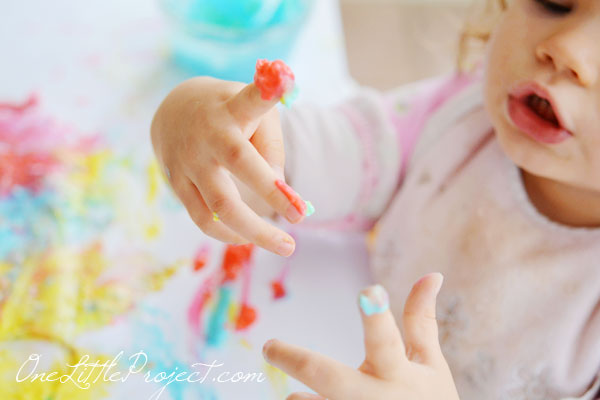 It’s not the same as store bought finger paint, and colours aren’t as vibrant. But at least you know that if any ends up in their little mouths that it’s harmless. Not to mention it is super easy to clean up and didn’t leave any stains on them. 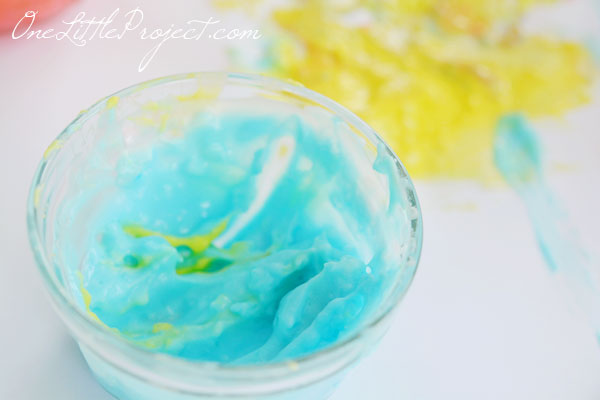 Here’s some of the art work in progress. I liked that the paint ended up being more three dimensional than regular paint. It had a great texture to it: 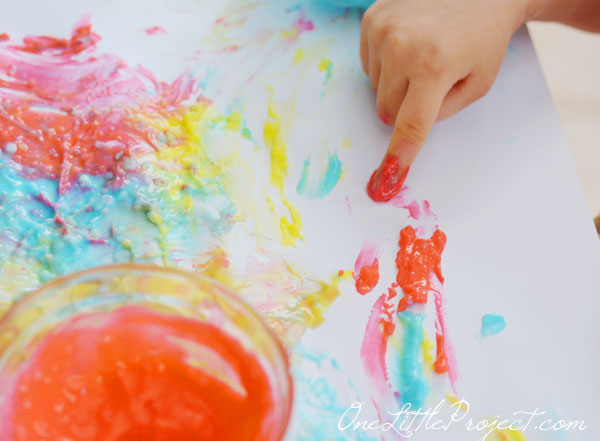 I thought this was going to be really easy to make. Maybe it was just my corn starch, but it was a bit of a frustrating experience trying to get to a consistency that worked. I found that cooking it on the stove top made it solidify too much when it cooled off. I read that microwaving it just made it overflow similar to microwaved oatmeal (thankfully I didn’t try that). So boiling water from the kettle seemed to be the best solution. 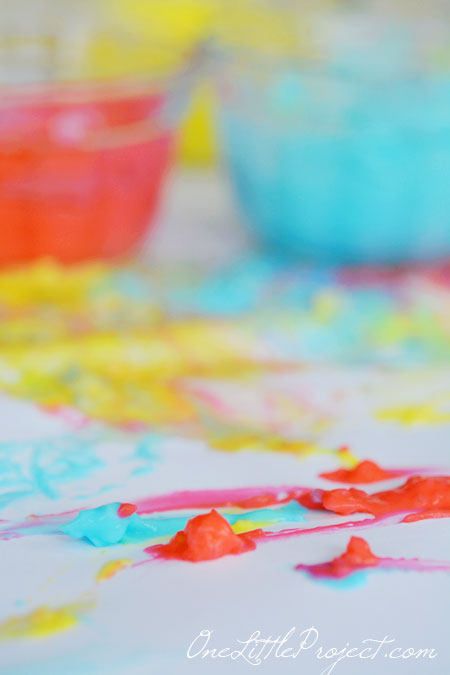 My girls didn’t seem to mind that it wasn’t perfect. Leah loved squishing it between her fingers and mixing all of the colours together into a sticky masterpiece. Kate preferred the one finger approach insisting that all the other fingers be kept clean during the process. Once I got the recipe right it was a lot of fun, but be prepared for a little trial and error.