END_OF_DOCUMENT_TOKEN_TO_BE_REPLACED

It’s income report time here again on One Little Project! If you’re a regular reader, you probably won’t care to read about the nitty gritty details about how we bloggers make money. (Or maybe you will?) So feel free to skip over this post, and I promise I’ll be back with a new craft or recipe post next time!

But today, I’m going to share how I made my blogging income last month, what my traffic was and what I learned, so that other bloggers can (hopefully) learn from it. It somehow makes me feel accountable and also helps keep me motivated to keep on growing.

And this month we definitely saw growth. Wow. November was a crazy month, and I’m so grateful for it! When I look at these numbers, I have to pinch myself just to make sure it’s all real! I love blogging and it’s so rewarding to see all my efforts, well… rewarded. 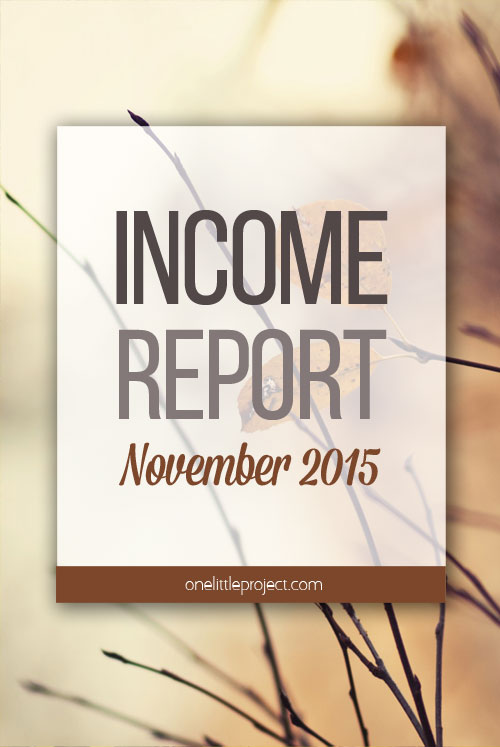 That’s almost double what I made last month! So in Canadian dollars, my net profit was close to $7,250 CDN! Wowsah!

There’s a few reasons for the huge increase. 1) Advertisers pay really well during the month of November. My RPM is pretty much double what it was last January. And 2) I had two posts go viral in November, thanks to my growing Facebook fan page. I’ll talk more about that in a bit though!

I made a little extra money from Amazon Affiliates this month, mostly because people are starting to do their Christmas shopping, but other than that, my affiliate income is really low. And since I don’t have a product yet, I’m completely relying on ad revenue to make money. Which is a scary place to be! Definitely in the new year I need to add another revenue stream, because it’s a little risky having all my eggs in one basket!

You may have noticed a fee from Codeable on my expenses list – It’s a site where you can hire WordPress coding experts to fix things on your site. The images on my mobile site have been getting cut off, pretty much forever, and it looked terrible! I frustrated myself for hours trying to fix it, but I just couldn’t figure it out.

So I did a quick Google search – something along the lines of “WordPress coding expert” and I found a website called Codeable. Normally I outsource things through Upwork, but I didn’t want to send all my login credentials to some random coder overseas. But Codeable is legit, reliable, and I felt very safe sending them my info. And what’s even better is that within 4 hours, my mobile images were fixed!

I’ve been stressing about this for months, and I had no idea it would be so easy for them to fix it! So definitely check them out if you have a nagging WordPress problem you need help fixing. I was very happy with their service!

I reached a new record for traffic last month with 893,672 pageviews, mostly from the viral posts. I also had the most traffic for a single day with a holy-crap-I-can’t-believe-this-is-happening, 76,000 pageviews on November 19th alone. I spent most of that day watching my real time traffic in Google Analytics. It was like a little party going on in my site with more than 300 people there at any one time. Good times for sure!

I coasted a bit for the rest of November. We have a babysitter who watches the kids a couple days a week so I can work on the blog, but she went on vacation for the last week of November. So I wasn’t able to photograph any new projects and I had to take a week off too. But that’s what I love about blogging! You can take a break whenever you want!

My bounce rate is horrible. Apparently I’m not very good at getting people to stick around for very long. I guess I’m not doing a very good job at keeping people engaged? I really don’t have the answer? I’m not overly worried since I seem to be doing okay overall, but wouldn’t it be amazing if I could reduce my bounce rate? Even an extra 5% would result in a huge increase in traffic!

My two top posts were new Christmas posts published last month. The next two are old winter themed posts from two years ago which picked up some major steam. And then I have no idea what made the Non-Sandwich Lunch Ideas post see so much traffic? It’s funny what posts randomly get traffic on Pinterest out of no where – but I’m not complaining.

The great thing about the Facebook traffic was that a lot of people subscribed to my mailing list while they were on my site. Which is supposed to be good, right? I know everyone says it’s all about the list, but I seriously have no idea what to do with it!?

It’s costing me a lot of money to have so many subscribers! I tried promoting a flash sale from Ultimate Bundles to my email list, and do you know how many sales I made? Wait for it… a whopping ONE sale. Out of 5,000 people the email was sent to! And what’s worse is that I promoted the sale on Facebook too, so in the end, I barely broke even. *sigh* So many things to learn!

You could definitely see the advertisers’ increased budgets this month, because my RPM was the highest I’ve ever seen it. With no change from my all-my-eggs-are-in-my-ad-revenue-basket, my RPM went from $6.21 in October to $7.11 in November. Not dramatic or anything, and certainly not where I want it to be, but considering I don’t have any products, or affiliate income my RPM last month was pretty decent.

I didn’t expect Facebook to have such a huge impact on my traffic, but WOW. The bigger your Facebook fan page gets, the more people notice you. And the more people (as in other big bloggers) who notice you, the more likely they are to share your work. So the traffic isn’t specifically from my own Facebook page, but from the pages of many of the other blogs out there – both bigger and smaller blogs. It’s an amazing feeling when one of your blog posts gets shared by nearly all of the bigger bloggers in your niche. A lot of it is just plain luck for stumbling on something successful, but if I didn’t have a large Facebook fan base, then none of that traffic would have happened.

I mentioned last month that I’ve been working on growing my Facebook likes this year. My goal was to have 50,000 Facebook likes by the end of the year, and I got there at the beginning of November. Yay! And what’s crazy, is that I’m almost at 60,000 likes already. If someone tries to tell you that Facebook isn’t worth the effort – DON’T LISTEN! Facebook is extremely powerful at bringing your work in front of a targeted audience and I can tell you that it definitely increases your traffic! You just need to build a good fan base.

Which brings me to the Facebook for Bloggers course I announced last month. Since I have found it so helpful to have a growing Facebook fan page, I’ve been working on a course to tell you exactly how I went from 2,000 Facebook fans to 50,000 in less than 8 months. The course isn’t finished yet, but you can add your email address to the box at the bottom of this post, and I’ll let you know when I have more details about it’s release. I’m pretty excited about creating a product! I really hope the course will help other bloggers who were in the same position I was in last year!

I live in Canada, where we are lucky enough to have a full year off from work for maternity leave. My little boy just turned 1 last week, so my maternity leave is officially over. I’ve managed to stretch it out a little longer, but I have to go back to my day job as a Mechanical Engineer in January. Somehow I’ll have to find the time to keep posting on the blog at least three times a week if I want it to keep growing. At least with this extra blogging income, I’ll only have to work part time at my day job, but wow, is it ever going to be busy!

I know, I know – Yes, I had a very successful November, for sure, but I have three kids, a mortgage and expenses through the roof. So I just can’t make any life altering decisions until I have a bit more blog income stability here. For the time being, I have to keep on dreaming about what life would be like if I made a full time income from blogging!

I’m hoping the traffic and income stays fairly high for the month of December, but I’m expecting a big blow when January comes. Once Christmas came last year, my traffic hit the floor and my RPM plummeted. I’m hopeful with the extra traffic I’ve been getting that I’ll still do okay, but I really don’t know what to expect…