END_OF_DOCUMENT_TOKEN_TO_BE_REPLACED

Hi everyone, and Happy New Year! It’s time for another income report here on One Little Project! This is where I give a behind-the-scenes look at how things are going here on the blog. So if that doesn’t interest you, feel free to skip this post, and I promise I’ll be back again next time with a craft or recipe post! 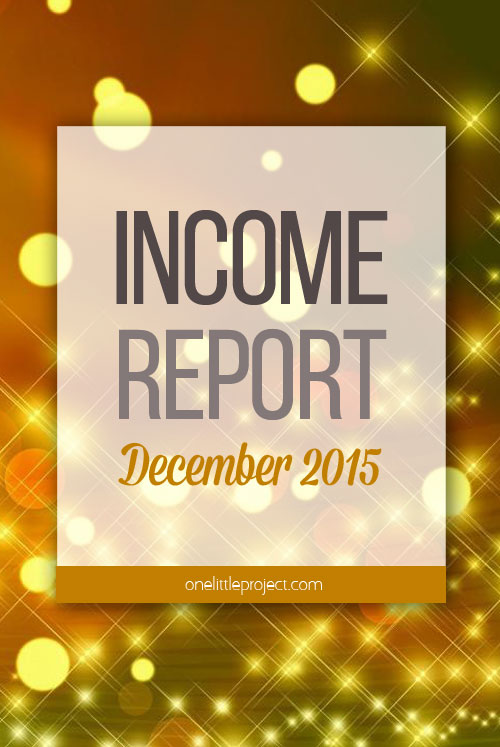 December was another great month! Here are the income stats for the month:

December is an awesome month for bloggers! And I couldn’t be happier with my income for the month! My income is heavily based on ad revenue, with a very small amount of affiliate sales. Is it ideal? No. Should I have other income streams? Yes. And I will. Everything just takes a lot longer when you have three young kids at home! Heck, sometimes I have to pinch myself that I’ve been able to do as much as I have this past year, with a baby, 3 year old and 5 year old to keep alive and happy.

Pinterest’s algorithm is one, big mystery to me. I’m not going to claim to be an expert, because honestly, I have no idea what makes Pinterest rank something high on their internal search. But somehow, two of my posts ranked #1 on Pinterest for the search term “Christmas” for almost a full week (at different times). Which, I’m not going to lie, seems like a HUGE success! 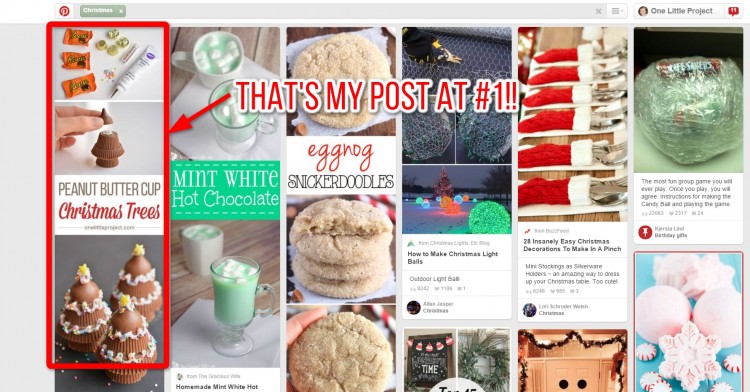 I don’t know if Pinterest changes their algorithm daily, or if it’s random, but the Peanut Butter Christmas Trees post shown in the image above, was ranked #1 for “Christmas” for one day. It wasn’t even shown in the top few hundred pins the day after I took this screen shot. For all I know, Pinterest shows me posts from my own website based on cookies they’ve collected for how often I visit my site. Who knows, right?

The following week, another one of my posts was ranking #1, again for “Christmas”, but this time it was Jamielyn’s pin from I Heart Naptime. That pin has a whopping 54,000 pins, so at least there’s some logic in it ranking well.

So, good Pinterest things are happening for me, right? Don’t worry, the universe corrected itself.

This month Pinterest proved that to me that it’s scary when you rely on one source for income or traffic. Pinterest brings me 70% of my traffic. (At this time last year, before I started working on Facebook, it was bringing in 90% of my traffic! Now that’s scary!) I never really thought much about it, until I went to pin something from my blog and I got this message:

So I tried clicking a few more posts and I got the same message. WHAT!?!? Pinterest wasn’t letting people onto ANY of the posts on my site. I checked my Google Analytics and my traffic from Pinterest was 0. I got light headed and I swear my ears started ringing. And I may have cried a little. Never before have I felt my blogging world pulled away from me like that.

It was a Saturday evening when I noticed the problem. My only option was to email their support team, but I knew they weren’t likely to get back to me quickly. I had visions of all of my December traffic disappearing and I began to question blogging all together.

It took about 24 hours before I got this message from Pinterest support:

I was blacklisted. By mistake. And it sucked. I was relieved when it was all fixed, and 24 hours is pretty quick for the problem to be solved, but it’s a really good reminder that the traffic from a social media source doesn’t belong to you and it can be taken away in the blink of an eye.

I had residual traffic coming in for most of the month from my Christmas Tree Brownies post that had gone viral back in November. The rest of my Christmas posts did well, but nothing compared to the huge amounts of traffic that that one viral post brought in. So in November, my total pageviews were 893,000 and in December it was a bit of a drop, down to 672,000.

It’s not a huge shock that One Little Project had less traffic this month, especially when you can very clearly see the sudden traffic dip in the graph above once Christmas passed. My traffic was pretty much cut in half for the last few days of December, and it’s still quite low compared to the last few months of the year. But I knew it couldn’t last forever! I know it will slowly climb as the year goes on.

My top 5 posts in December were all Christmas or winter related. (I know you must be as surprised as I am…) I did find it interesting that one of my top posts was a round up post. I tend to do round up posts as “filler” because they’re easier to produce, so it’s nice to see that they’re actually getting some decent traffic.

Do you want to take any guesses on how many email subscribers I had one year ago, on December 31st, 2014? It makes me cringe just saying it… I had 383 subscribers. And that was after TWO YEARS of blogging. Yikes. So I’m beyond shocked that my list has seen so much growth this year! I’ve been using the pro version of Hello Bar since September and it works amazingly well for me. I have no idea what to actually do with all those subscribers, but at least I’ve figured out how to get them to sign up. Baby steps, right?

I feel like I’m cheating a bit since a good chunk of January has already passed, and I know how it’s all going, but I can tell you that my RPM is definitely not going to get higher than what it was in December with only ad revenue as my main source of income. At least, not until next December.

SPOILER ALERT! My RPM is somewhere in the $3.80 range right now. And with my traffic half of what it was during the holiday season, January is shaping up to be a pretty dismal income month. But since this post is supposed to be about December, I’m going to go ahead and high five myself, for the highest RPM of the year. WOO!

Well, my sweet baby boy just woke up, so I’m going to leave it there. See you next month!