END_OF_DOCUMENT_TOKEN_TO_BE_REPLACED

I was in my kitchen yesterday and out of no where I heard a really loud chirp.  It was so quick, that I couldn’t really place where it came from, but I figured it had be one of the three smoke detectors that we have in our house.  We’ve been here for 3 months now, so it was a good reminder to change the batteries in all of our smoke detectors.  Who knows when the previous owners touched them and if they are chirping, it’s definitely time for a little smoke detector maintenance! 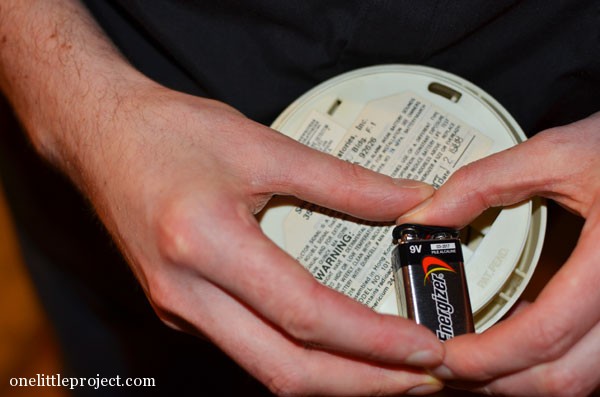 I am no expert in smoke detectors, but the three reasons it could chirp (I’m sure there are more reasons, but these are the only ones that I know) are 1) the batteries are getting low and need to be replaced or 2) the sensor is covered in dust or 3) there is a spider living in it.

You might think that’s odd, but in our old house, THREE nights in a row our smoke alarm went off outside our bedroom door (I had a four month old baby also waking several times a night so I was NOT impressed).  The first night it chirped once.  The second night, the alarm actually went off for a few seconds, which sent me on a mad Google search to see what could be the matter.  It’s not like you can easily fall asleep after your smoke alarm goes off in the middle of the night anyway!

I determined it was either dust or a spider living in it – which was the most likely culprit because it was only happening at night.  When it went off for a few seconds again on the third night, Jason took it down, brought it to our bedroom to assess and sure enough, a spider fell out of it while he was looking at it.  (creepy!)  We vacuumed it out and we didn’t have any more problems with it.

How to change the battery in a smoke detector

Everyone’s smoke detectors are a little bit different, but this is what we had to do to change the battery in the smoke detector in our basement. 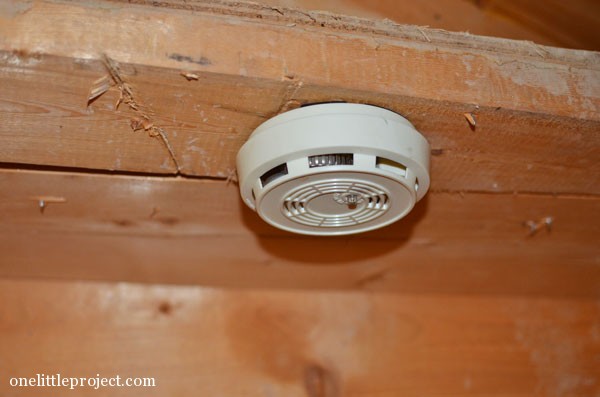 Twist the smoke detector off the bracket: 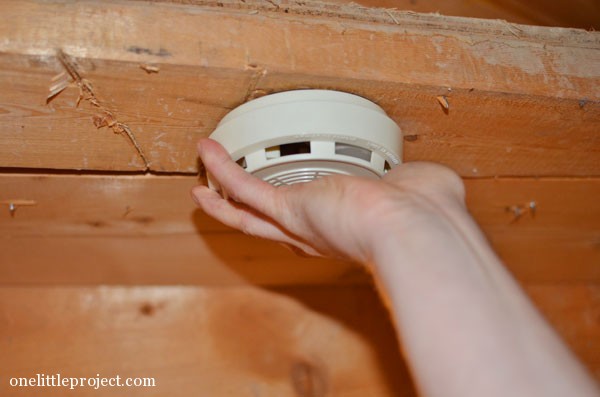 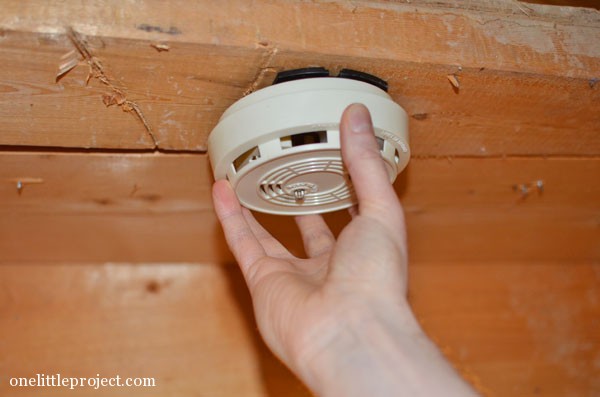 If it isn’t hardwired it will completely remove from the ceiling like ours did: 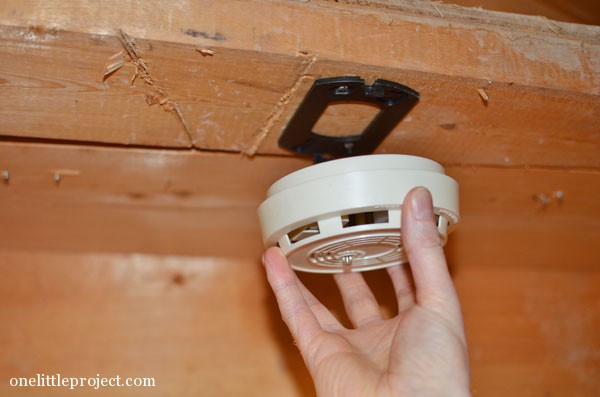 You can see in the photo below that the battery expired in March 2011, nearly two years ago, so it’s a good thing we are changing it.  You can also see that our smoke detectors must be the original ones for the house, since they say they were manufactured in 1988: 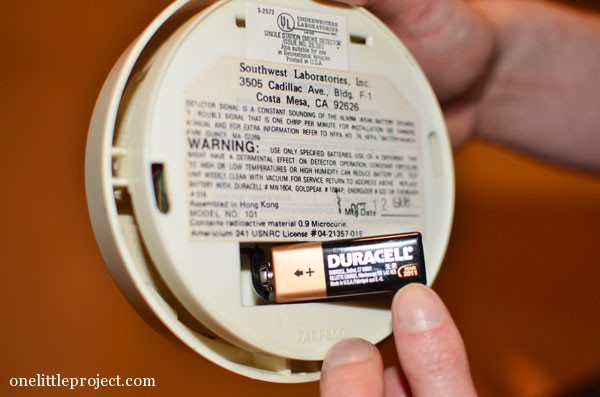 We took out the old battery and tried to get the new battery back on but the prong wasn’t attaching to the battery properly, which is no good:

So we used pliers to tighten the prong a little bit so that the battery would fit properly in the smoke detector: 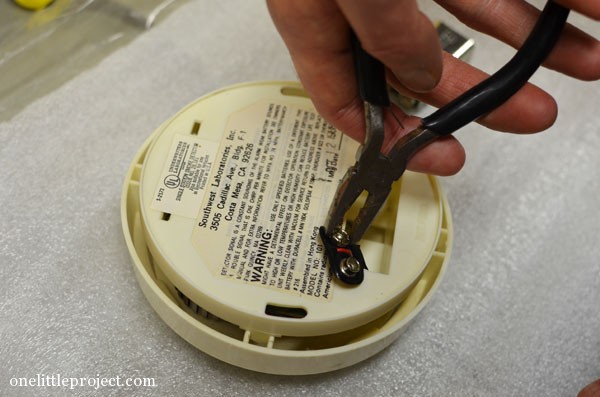 Obviously not everyone will have that problem, but it’s a good idea to wiggle the battery a bit to make sure it has a secure connection.  I was happy we were doing a little bit of smoke detector maintenance to check on things and keep our family safe. 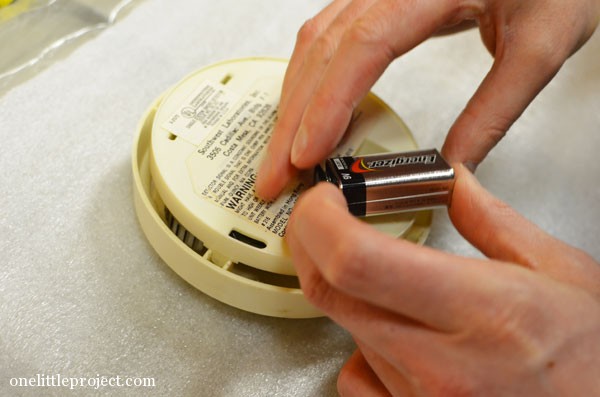 Since our sleep is precious and we have had problems with dust and spiders in the past, we pulled out the compressed air to give the smoke detector a good cleaning and blow out all the dust: 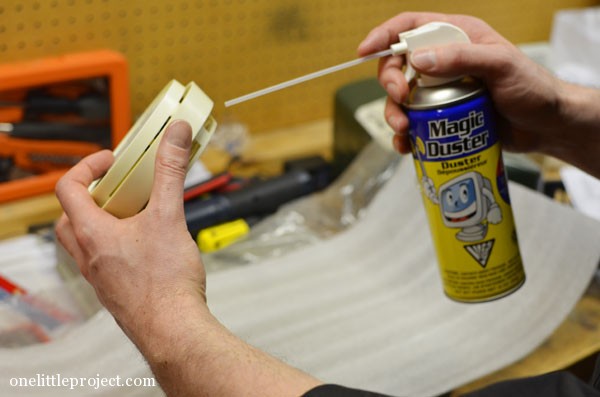 Then we twisted the smoke detector back onto the bracket:

And pushed the button to test to make sure it’s working (this is the worst part… I hate the sound of smoke detectors, but I guess that’s the idea!): 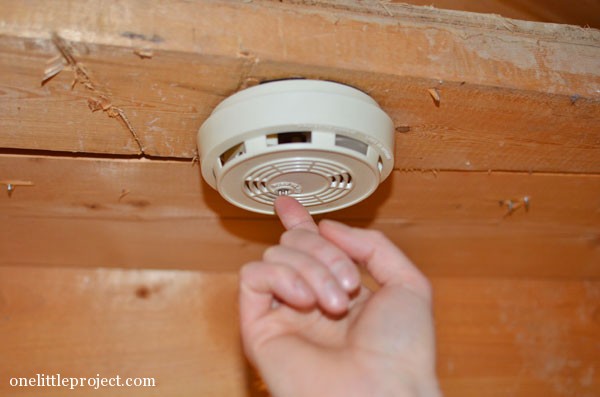 This isn’t the most glamorous little project in our house, but it’s definitely an important one to do to help keep our little family safe.  Since we haven’t lived here for long, this was the first time we had ever even tested the smoke detectors, so a battery change, a little bit of smoke detector maintenance and a quick test to make sure they all work, and I have just a little bit more peace of mind.