END_OF_DOCUMENT_TOKEN_TO_BE_REPLACED

I was kind of nervous to make this homemade super laundry sauce. I’ve never made a DIY laundry detergent before, and I was kind of scared it would flop. But even though there’s a lot of steps, it’s really easy to make! And it smells AMAZING. You know that super fresh and sweet smell that clothes get when they’ve been hanging outside on the clothesline? So awesome!

My towels are about 8 years old. They’re still in decent shape so I don’t want to buy new ones until I have to. Every time I get out of the shower, I grab my towel, dry my face off, and take a big whiff of my towel expecting the luxurious smell of sunshine and roses. I do it pretty much every time I shower, and it never smells like that. They actually smell kind of dingy and I’m always disappointed. I guess it’s years of detergent build up on the towels? I’m not exactly sure? But after washing it with this laundry sauce, they smell SO GOOD. I mean, my towels are still old, and they’re still faded, but I feel like I’ve brought new life back to them. Or at least back to the way they smell.

I’m not sure why I find it SO MUCH FUN to make my own household products!? Maybe it’s because I’m kind of cheap? It doesn’t hurt that they have way fewer chemicals than store bought detergents too. But mostly I think it’s that it makes me feel like, “See, I’m such a good homemaker that I can make my OWN laundry detergent!”. Because let’s face it. I have a giant pile of laundry that has been sitting on my living room floor for about 8 days now, so I kind of need that homemaking ego boost. The kids now find their clothes and get dressed in the living room because I just haven’t had the energy to fold it all.

This is called laundry sauce because it’s not quite a liquid laundry detergent and it’s clearly not a dry powder. It’s more like the consistency of mayonnaise. It might be a new consistency from what you’re used to, but it works really well and no other detergents are needed with it in the washing machine.

And the crazy part is that you only need 1 Tablespoon per load. Yes, you read that right. 1 TABLESPOON PER LOAD! It’s super concentrated and only takes a small amount to get things clean. (Although, I should mention that in my desperate attempt to liven up my towels, I added 2 Tablespoons to that load. What can I say? That’s the rebel in me…).

This recipe makes enough detergent for 130 loads. I haven’t done the math exactly but I’m estimating that it costs about $3 per batch which works out to about 2 cents per load. When I buy detergent at the store, it usually costs me more than $20 for a box of Tide, so to me, this is crazy cheap! And I LOVE saving money!

The full printable recipe and directions are at the bottom of this page, but here’s what you’ll need:

You can definitely make this recipe without using the Essential Oil, it’s just that you won’t get the same pure, summer fresh, laundry smell without it. 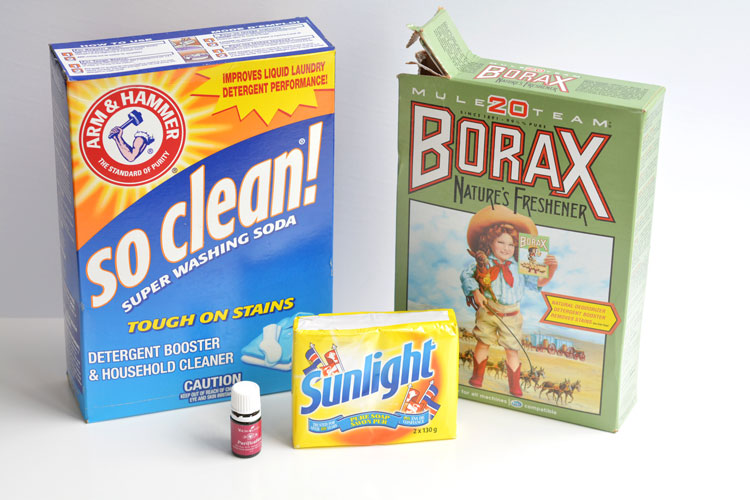 I really wanted to use Fels Naptha because I’ve heard it’s the best for preventing soap build up on your laundry, but I couldn’t find it anywhere. I’m pretty sure it’s common in the United States and that you can even get it at the grocery store? You’ll have to take a look and see what you can find. 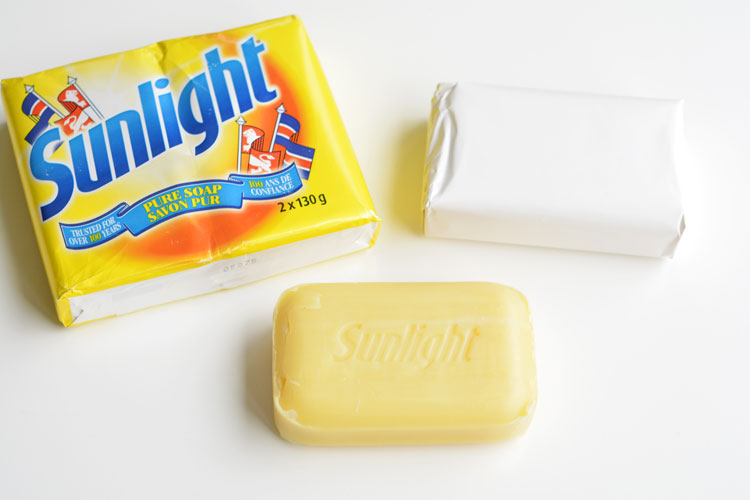 Cut it into chunks and put it in a food processor. Or you can try grating it by hand, but it would probably take awhile, and it might be hard to get the soap residue off a grater? The food processor was really easy to get clean after this. 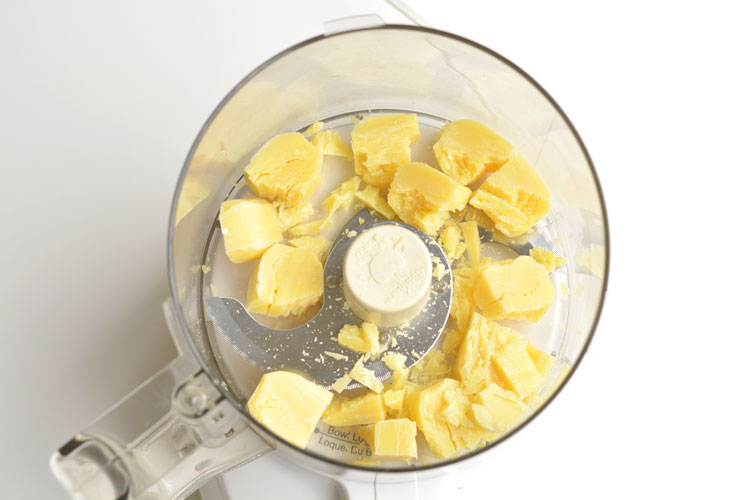 Pulse it in the food processor until it’s as close to a powder as you can get it. 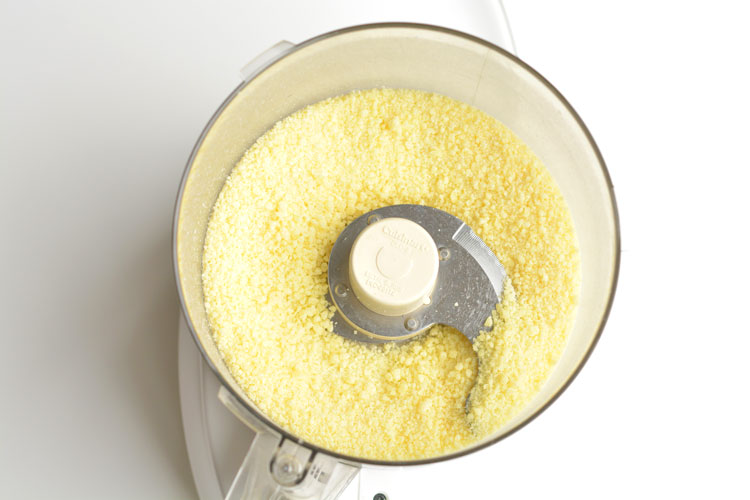 Bring a pot with 4 cups of water to a rolling boil and add in the powered soap. 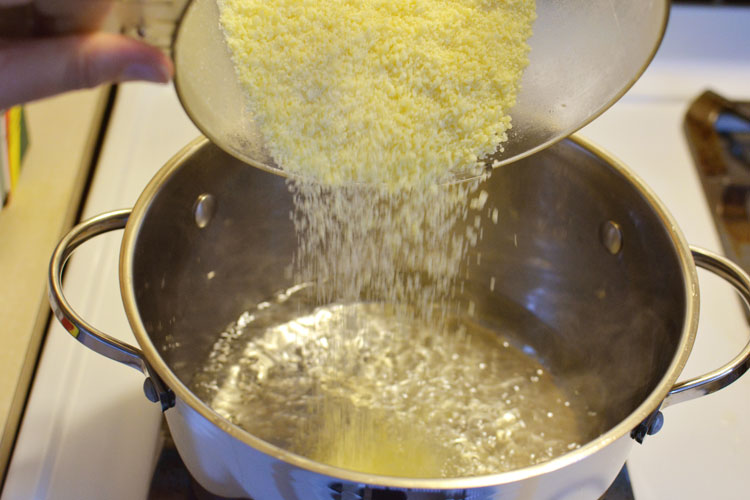 Bring it back up to a gentle boil, stirring constantly. You don’t want this boiling over so keep an eye on the heat and turn it down if it starts to bubble more than what I’m showing in my pictures. 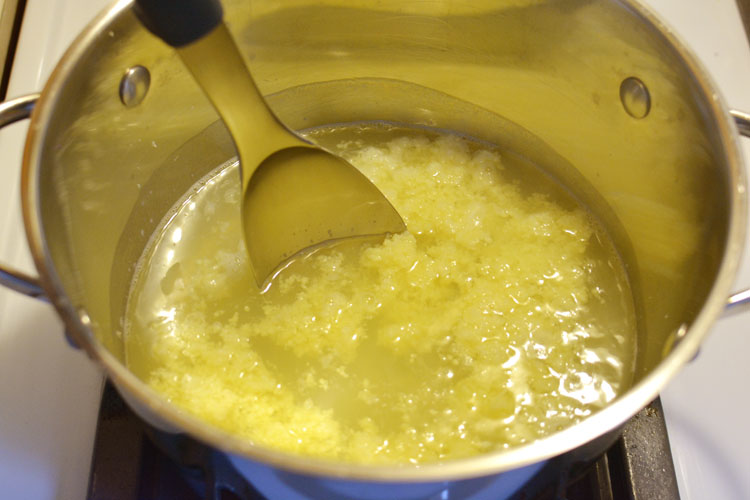 It takes about 15 minutes for the soap to completely melt. If it takes longer than that, you need to turn your heat up. 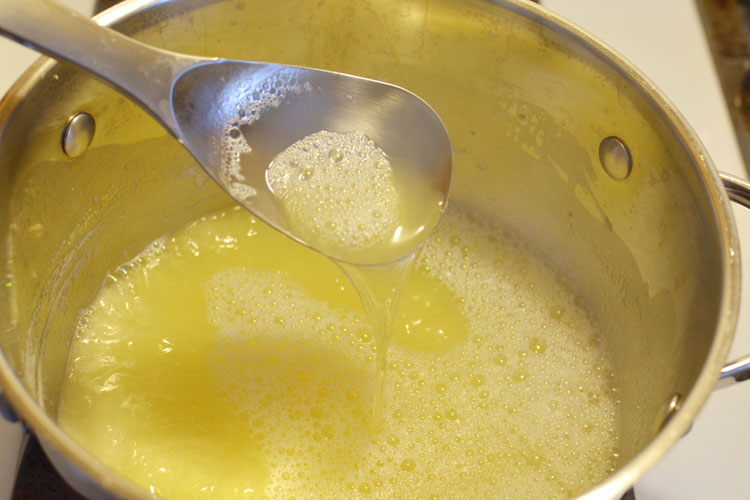 Then remove the pot from the heat and add the mixed together Borax and Washing Soda powders to the melted soap mixture. 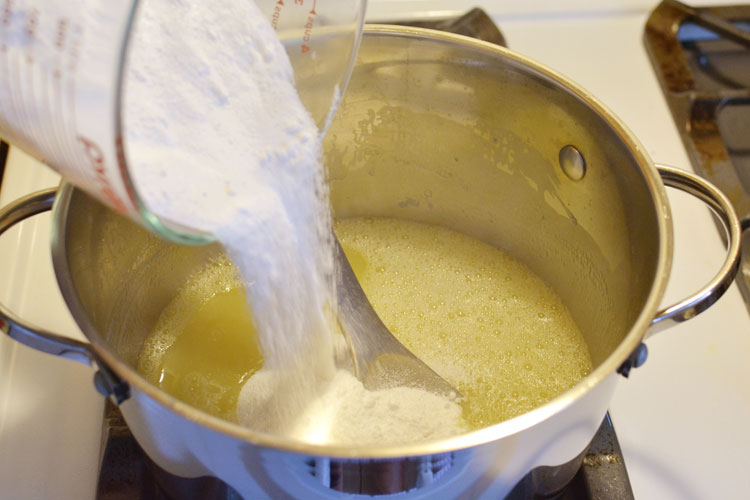 It took about 5 minutes of stirring for the powders to completely dissolve. If you can still feel a “grainy” texture on the bottom of the pot with the spoon, then keep stirring. Once it feels smooth with your spoon as you stir, it’s ready! If you stop stirring too soon, it will have a grainy texture, and won’t dissolve as well in the washing machine. 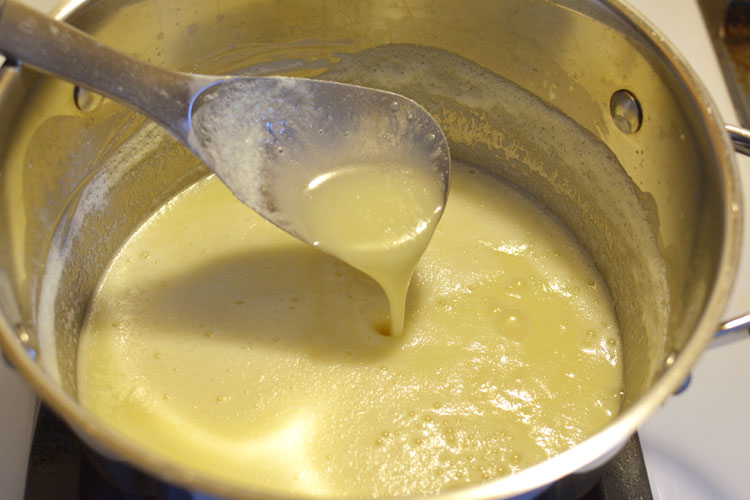 Once everything was completely mixed up and dissolved I added Young Living’s “Purification” essential oil. It’s a blend of Lemongrass, Citronella, Lavandin, Rosemary, Melaleuca Alternifolia, and Myrtle. I don’t know what most of those are, but it smells amazing, and it really refreshes your laundry! 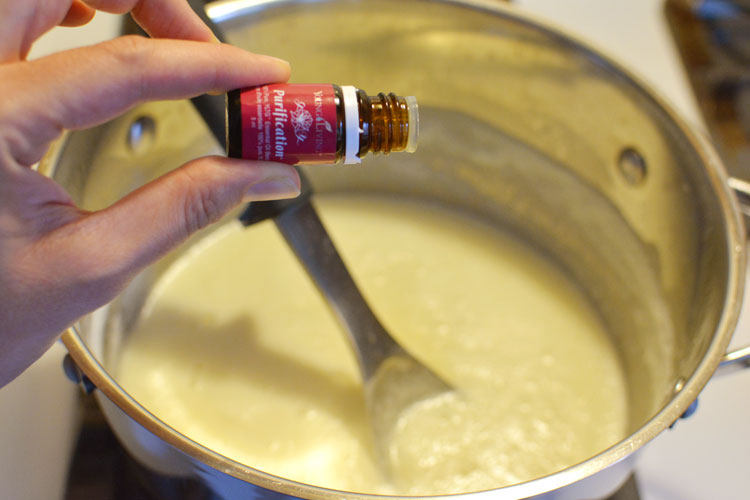 Pour the mixture into two 1 quart (4 cup) mason jars. Try to split it as evenly as you can. You can see I was a little off on mine, but it doesn’t really matter. 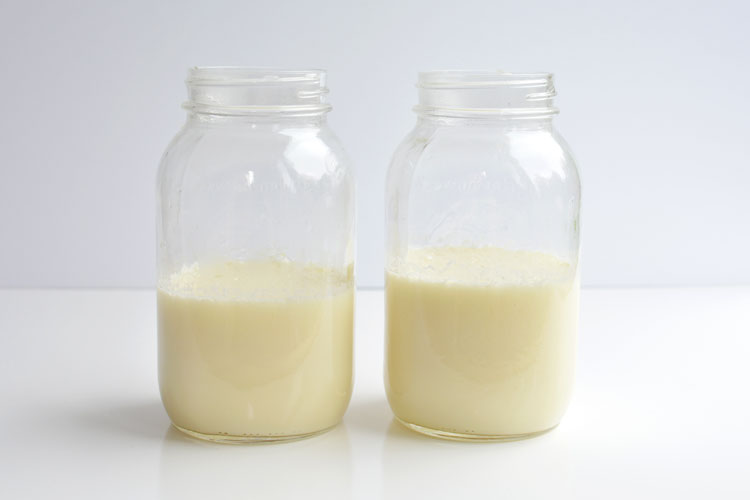 Add cold water to fill the mason jars up to the shoulder, leaving about 1.5 inches of empty space at the top. 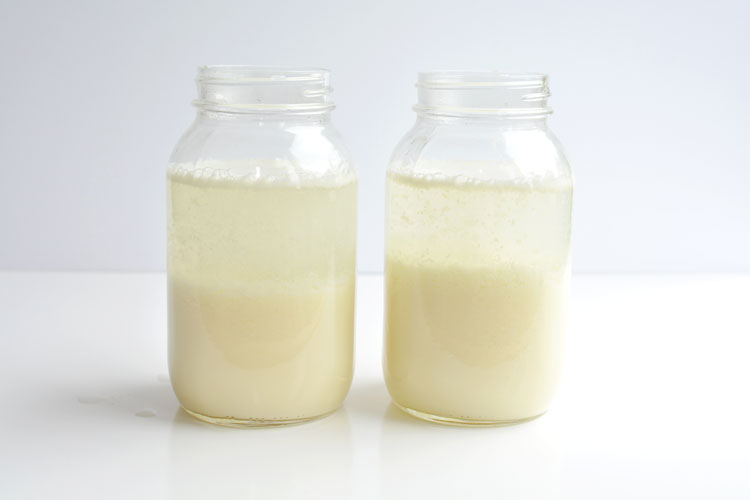 Then turn the jars upside down and let them sit for 4 to 5 hours to solidify and separate. I based this recipe on the one over at Budget 101 and she says that if you leave the jars any longer the texture becomes grainy. This is the first time I’ve made them, so I can’t verify that, but I’m willing to trust her on it. 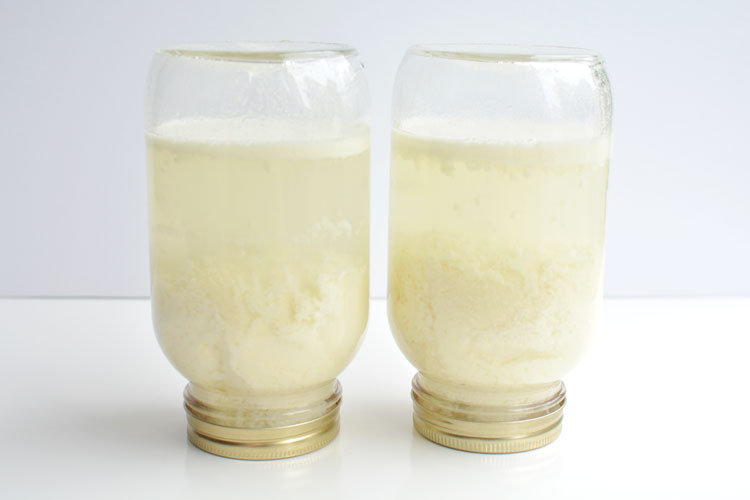 Now here’s the REALLY cool part and I had no idea you could do this! Go find your blender, and see if it fits on top of your regular mouthed mason jar. Mine fit perfectly! It’s like an instant magic bullet! 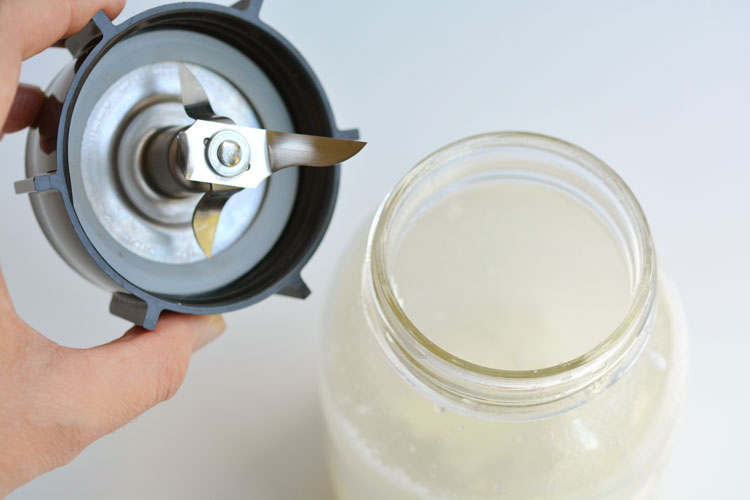 How cool is that?! Then you can put it in your blender and whip it until it’s smooth! 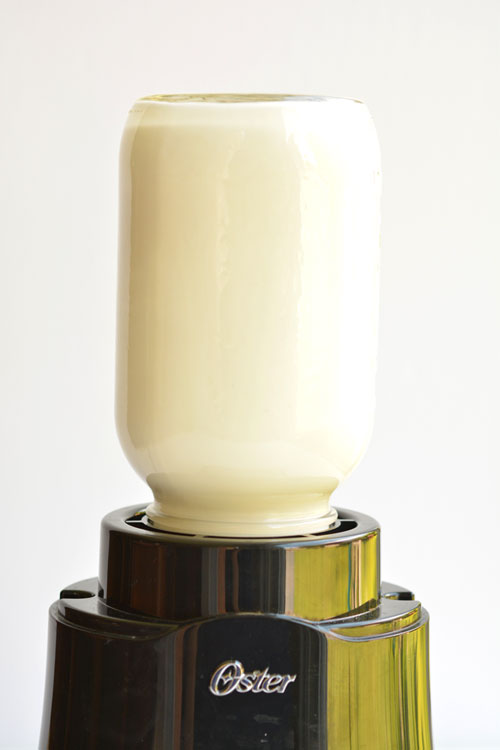 When you’re done, it will have the consistency of whipped cream or mayonnaise. 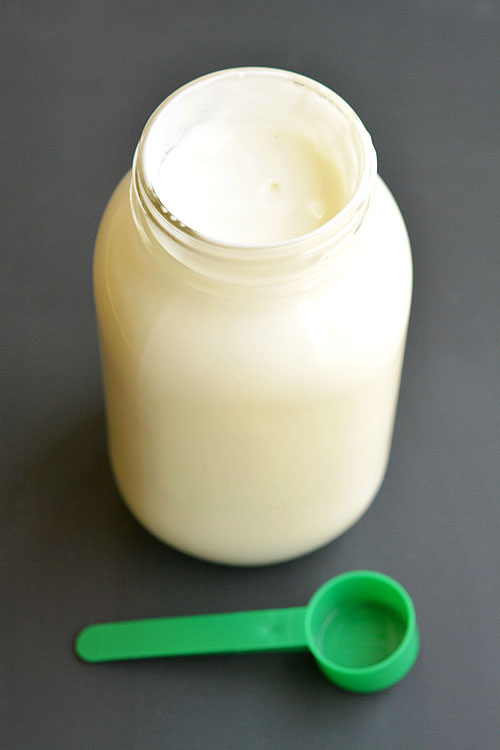 Add the lid back when you store it and it will last for months! That is, if you don’t use it all up first. 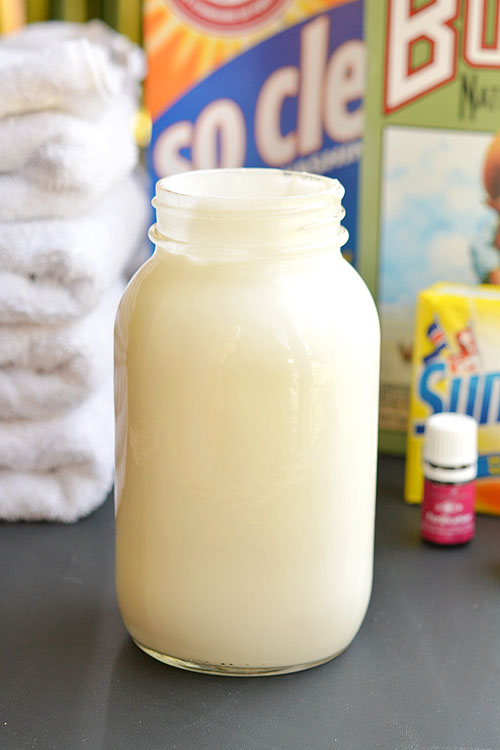 Pretty cool! And all it takes is 1 Tablespoon! I still can’t get over the fact that you need so little! And I love that it’s way more natural than store bought chemical filled detergents, which generally don’t contain any soap at all.

Want another laundry tip? Try adding two drops of the “Purification” essential oil to a wet cloth and adding it to the dryer with your laundry. It’s like a completely chemical free dryer sheet that will make your laundry smell amazing! 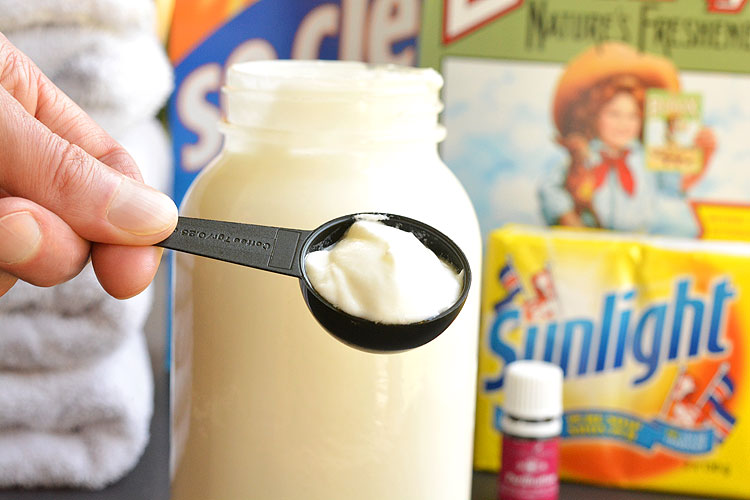 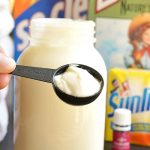 It works way better on those tough stains than regular detergent and smells amazing! 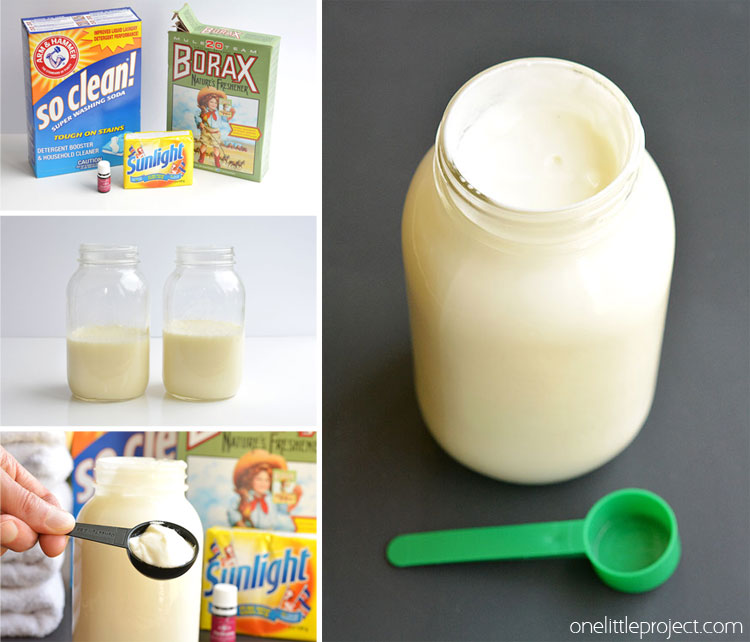 This homemade super laundry sauce is easy to make and it’s SO CHEAP! It works way better on those tough stains than regular detergent and smells amazing! You only need 1 Tablespoon per load and it ends up costing only pennies per load. Clean clothes. Great smell. Super cheap. I’ll definitely be making this again!