END_OF_DOCUMENT_TOKEN_TO_BE_REPLACED

You know how last time, I said I wanted to try a Halloween themed meal for dinner? Well, today I made stuffed pepper jack-o-lanterns, and they totally rocked!

And to tell you the truth, this was the first time I’ve ever made stuffed peppers for myself. I saw these jack-o-lanterns all over Pinterest and I was practically drooling at the thought of cutting out those sweet little faces for myself!

My girls were super excited when they saw all the smiling faces in the pan, but when it came time to eat them, it was a bit of a challenge convincing them to dig in, especially because they wouldn’t let me cut through the faces. Which is really too bad, because they tasted AMAZING. Like seriously, dollop on a spoonful of sour cream (that’s my Lithuanian roots coming through) and they tasted sooooo good!

And it helped that they looked super cute too! If ever there was a happy looking dinner, this would be it! Here’s how you make them!

You can make these with any colour of bell peppers, but to get the best “Halloween” look, I’d recommend sticking with orange and yellow. 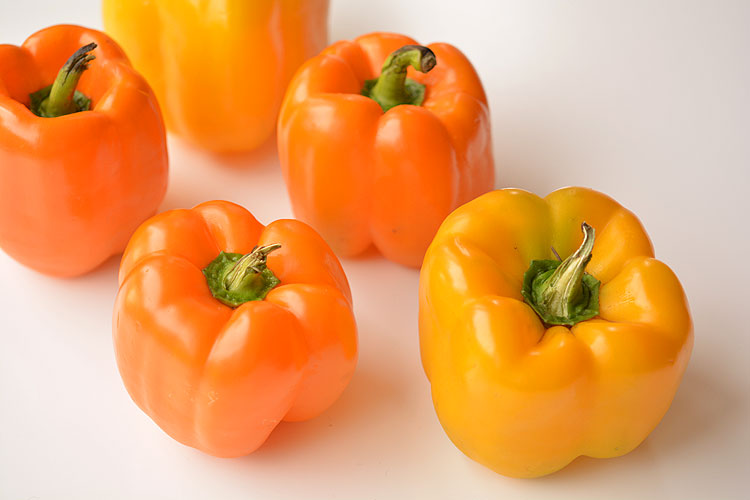 Use a regular kitchen paring knife to cut off the tops of the bell peppers – AT AN ANGLE. It’s important to make sure the knife is at an angle, otherwise those tops will just slip right back into the pepper. 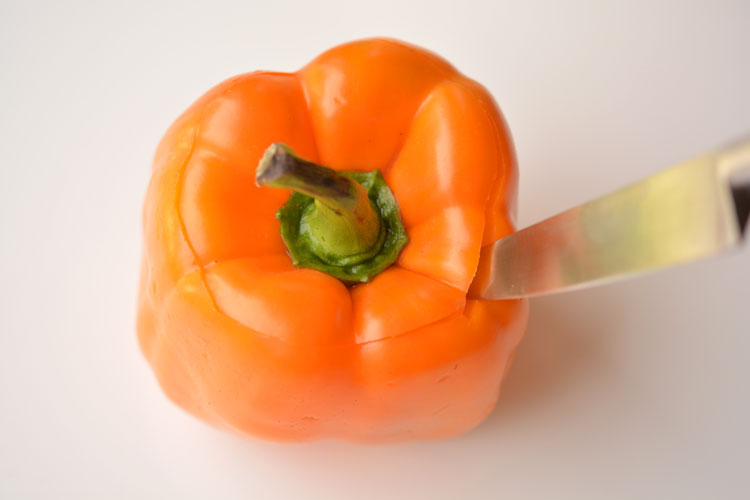 Pull off the tops of the peppers. I had to squeeze a couple fingers inside the pepper for a few of them to help pry off the top. But overall, they came out pretty easily. 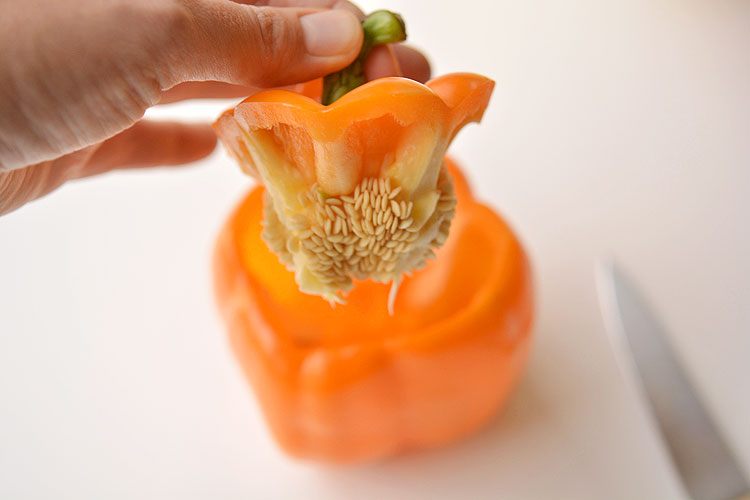 Cut off the seeds and other flesh from the top of the pepper. 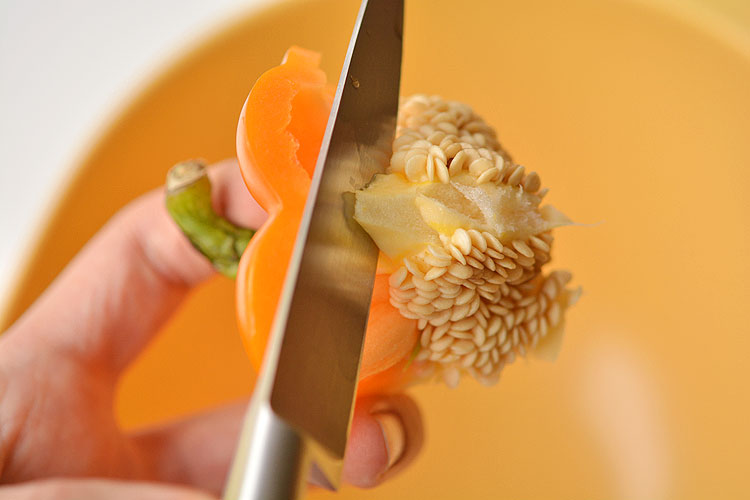 You want it to be left with nothing on it, so you can put it back on top of the pepper – Just like you’d do if you were carving a pumpkin. 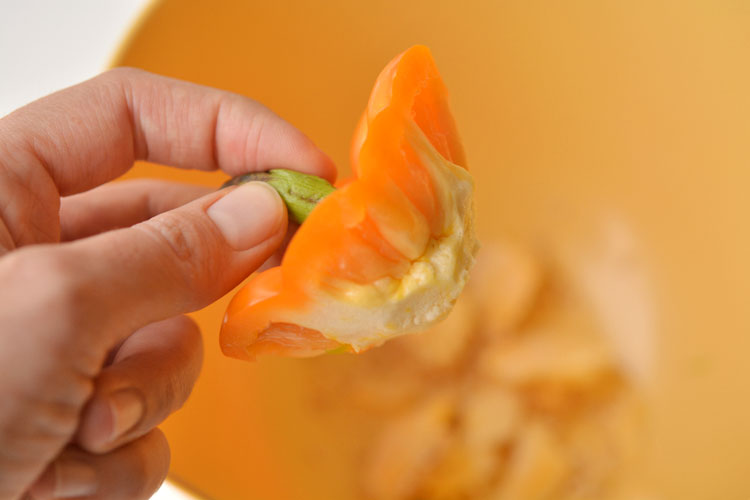 Remove all of the seeds and flesh from the inside of the pepper as best you can. I just used my fingers to pinch off the white soft parts. 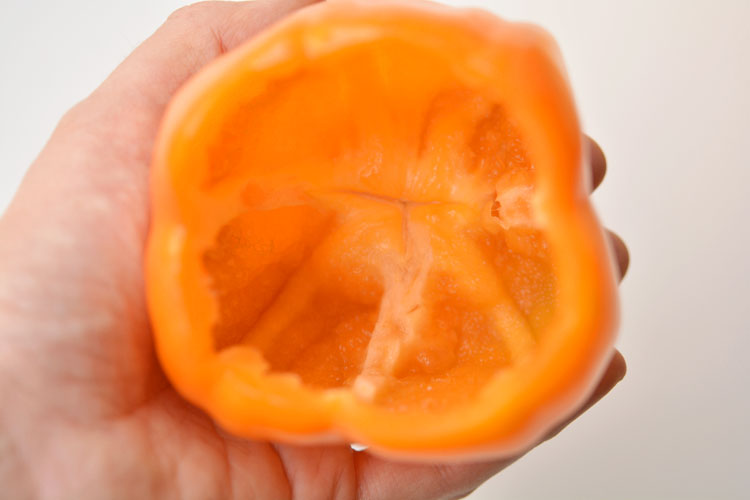 This is the knife I ended up using to cut the faces into the peppers. It’s just a regular small kitchen paring knife. I was worried the tip would be too big, but it seemed to work really well. 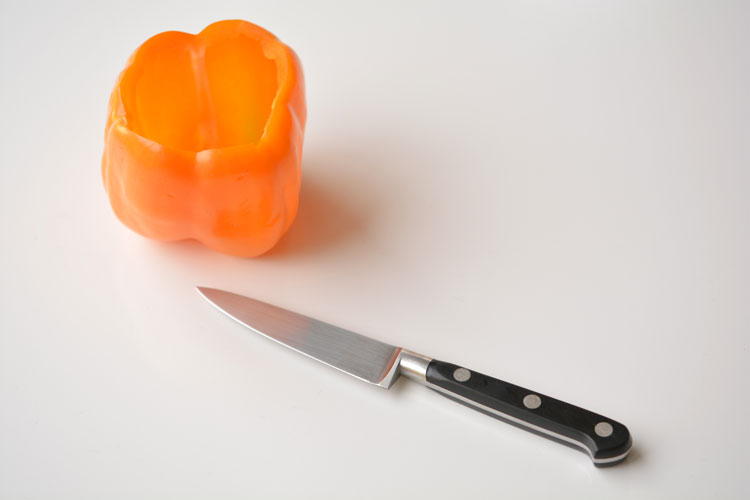 My cuts weren’t perfect, but you really couldn’t tell. 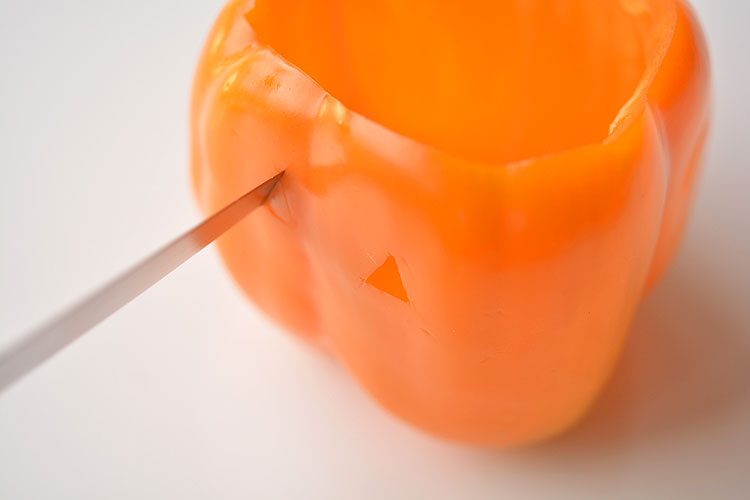 These are my  – I mean happy little peppers! They really do look like little pumpkins! My three year old kept asking if we were having pumpkins for dinner. 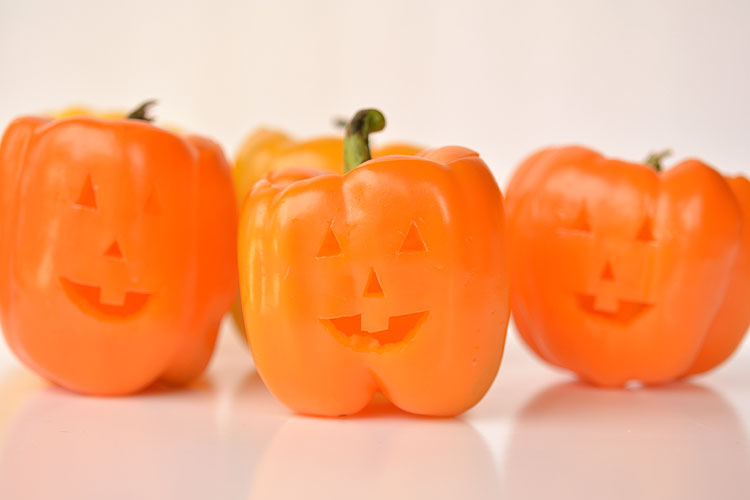 I made all the faces the same, and I’m glad I did, because they are so cheery! I have a hard time not smiling when I look at these! 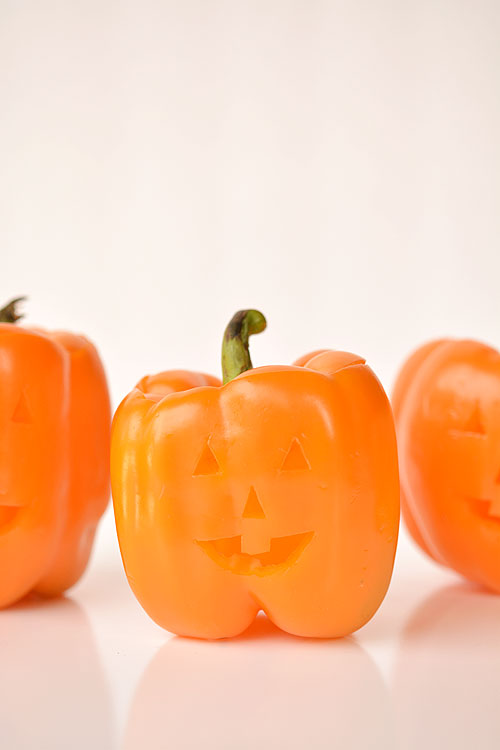 The recipe I used for the filling was AMAZING. Seriously. SO GOOD! I’ve included it at the bottom of the post. 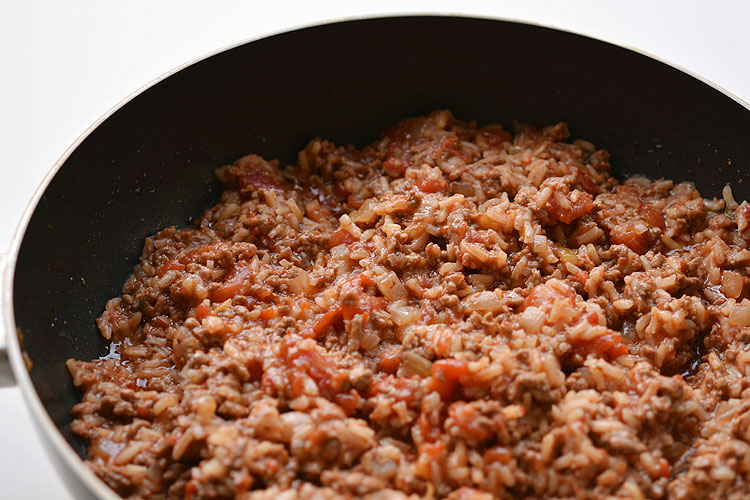 Fill the peppers as full as you’d like. I crammed as much filling in there as I could. 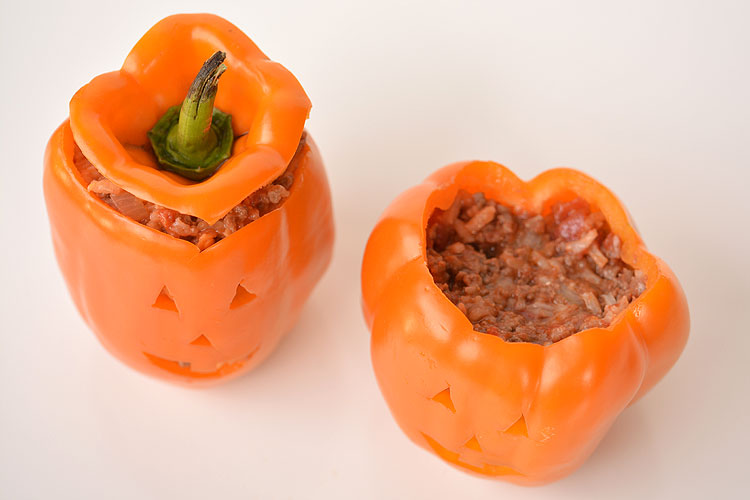 Again… these are making me smile. They are just so darn happy! 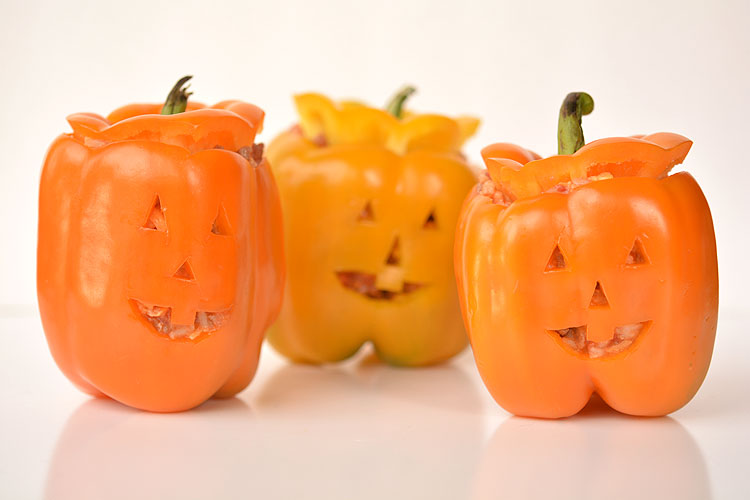 I’m actually shocked how easy they were. I was worried the faces would be crooked, or… well… butchered in some way or another, but you really can’t see the spots where I slipped. 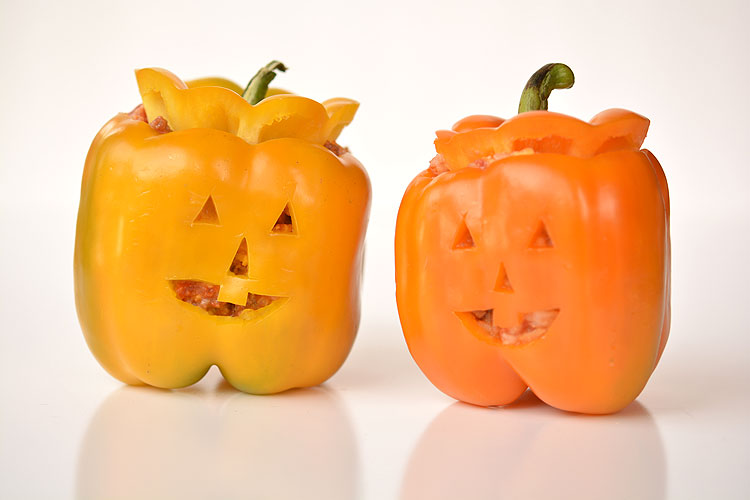 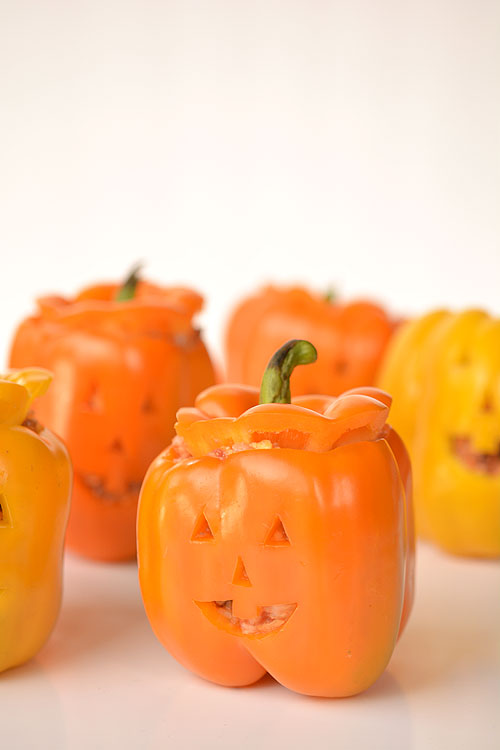 The filling recipe made enough for 6 large bell peppers. I only had 5 bell peppers, so we had extra filling left over. (I sent my husband to the store with instructions to get 3 yellow and 3 orange peppers, and this is what he came home with. Men… haha) 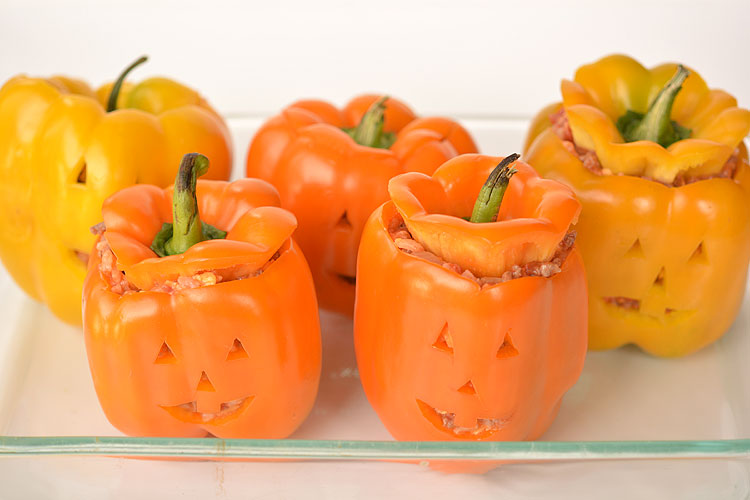 Of course, they got a little more droopy after they were cooked, but they were still pretty cute! 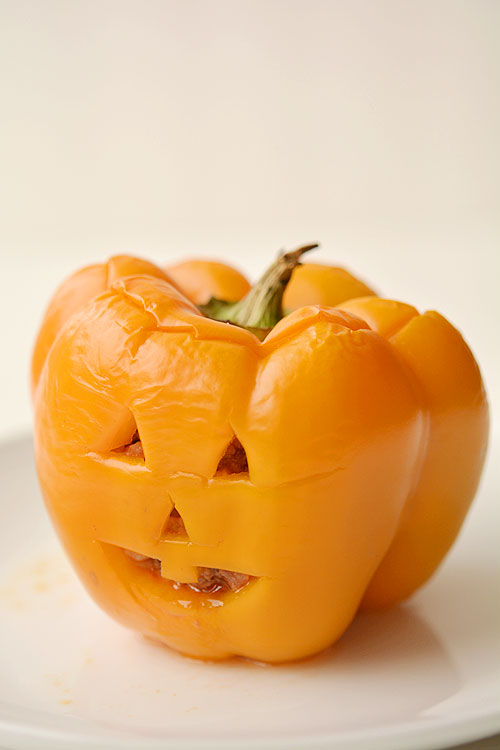 I had no idea what to serve it with? Is a salad reasonable? What side dish would you serve your stuffed peppers with? 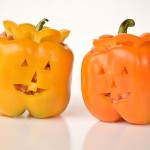 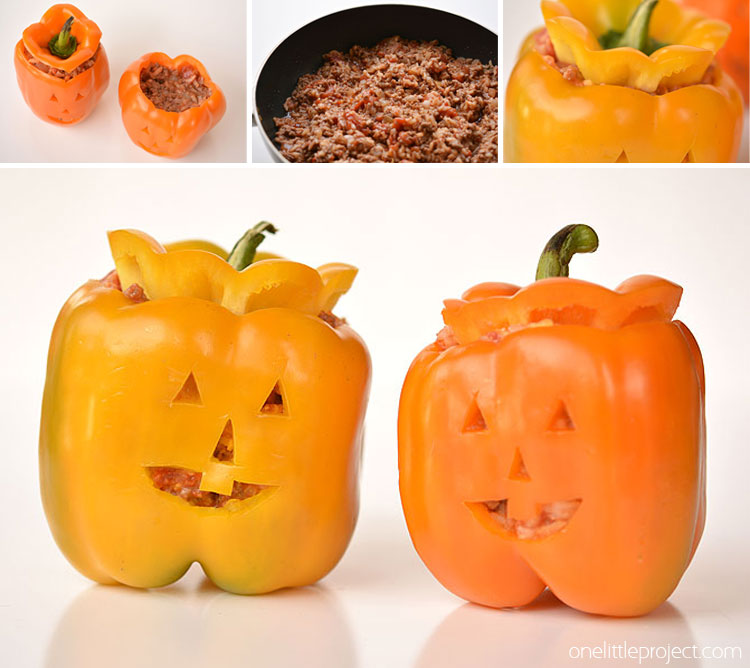 These stuffed pepper jack-o-lanterns make a fabulously healthy Halloween meal idea! They are surprisingly simple to make, and they look absolutely adorable! You can make the faces as spooky or as cheerful as you like. And best of all, you can make them a day in advance if you want, so all you’d have to do is bake them on the night you’re having them.

Wait! Before you go, check out our other popular Halloween food ideas and save them to your Pinterest boards!

How to Bake Pumpkin Seeds: