END_OF_DOCUMENT_TOKEN_TO_BE_REPLACED

It’s blog income report time again here on One Little Project! This is where I share details from the business side of things here on the blog – with information on my blog earnings and traffic for the month. If you’re a regular reader, feel free to skip this post and I’ll be back next time with some regular content! Or continue on and see what it’s like to be a blogger! 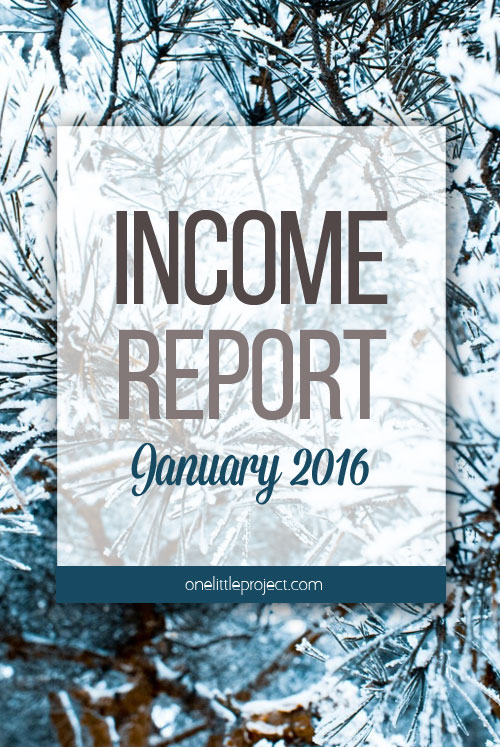 You know, January wasn’t as bad of a month for blog income as I was expecting. Don’t get me wrong, it still sucked compared to November and December, but it’s really good to see that the income (and traffic for that matter) didn’t plummet down to nothing after Christmas.

As I expected, my income for January is pretty much half of what it was in December. Advertisers’ ad budgets are through the roof around Christmas time, so that has a lot to do with my higher earnings in the fourth quarter of 2015. And also, people really LOVE Christmas (no shocker there), and are way more likely to click on a Christmas related post on Facebook or Pinterest, than they are to click on regular non-holiday posts.

Once January rolls around and the excitement of Christmas is over, I have to be honest, I have no idea what people want to look at online. Maybe they want to see organizing posts? Or healthy eating posts? I don’t often post about either of those topics, so clearly my blog topics just weren’t appealing to people in the same way. So I saw a drop in traffic.

And in case you’re wondering, my Valentine’s Day posts just seemed to make people on Facebook angry. Ha! I definitely wasn’t getting the same warm and fuzzy reactions as I was getting at Christmas! Apparently there are a lot of people out there who are not fans of Valentine’s Day and they aren’t afraid to express their negative feelings!

How to Start a Blog

If you’re a fan of blogging income reports, you’ve probably come across the super-awesome-and-amazing affiliate earnings from web hosts like Bluehost. And let me just say I WANT IN ON THAT ACTION! I’ve been drooling over the thousands of dollars that other bloggers seem to make each month with those posts. So this month, my big achievement was writing a “How to Start a Blog” post. It was actually a lot more work than I was expecting, but I’m really hoping it brings in some decent affiliate income.

Except here’s the problem. I wrote it, and so far I haven’t earned a single penny from it. I’ve got a link to it in my sidebar, I’ve spent some money promoting it on Facebook and I have it going out to a bunch of group boards on Pinterest, but so far NOTHING. I have to keep working on cracking the code, because even though I know people make good earnings from posts like that, I have no idea how they do it! Not to fear though – I don’t give up that easily, and I still plan to figure it out!

All things considered, I had a pretty good traffic month. In December we had 672,000 pageviews for the month, and in January we were down to about 550,000 pageviews – about a 20% drop. Not too shabby, and not nearly the huge drop that I was expecting. It helped that one of my older projects went semi-viral on Facebook. You can see the little spike at the end of the month on the graph below.

None of the posts I wrote this month made it into my top 5 posts for the month. Or the top 10 posts… Or even the top 50 posts. Geez, how’s that for depressing? Apparently I wasn’t publishing anything that people were interested in.

But weirdly enough, the fifth most popular post this month is one of my very first blog posts, from more than 3 years ago – terrible pictures and all! Strange what ends up being popular.

My RPM went down from $7.82 in December to $5.44 in January. I was bracing myself for a 50% drop, but it ended up being closer to a 30% drop. Which was great news! There were a few weeks at the beginning of January where my RPM was dismal… less than $4. So I’m really happy to see that it bounced back to something reasonable.

With the introduction of new income streams and products, hopefully I can see my RPM rise to $10 by the end of the year. Sounds like a good goal for the year, don’t you think?

January News: I Went Back to My Day Job

I live in Canada, where we are lucky enough to have a year long maternity leave – and I stretched mine even longer since this was our third and last baby. I have been so unbelievably blessed to have the time off to spend with my growing family and also very lucky that I had the time away from my day job to build my blog.

I spent hours (HOURS) every day this past year with my sweet baby boy napping on my lap (why it had to be the third child that was the most challenging, I’ll never know…). And while he was napping on my lap, I was working away on my laptop, writing blog posts, editting photos, and scheduling my Facebook posts. It has been amazing to have the time off from work to grow my online business.

But sadly, my maternity leave came to an end, and I had to go back to work at the beginning of January. At least it’s only part time, but it’s definitely a struggle to find the time to work on my blog when I’m working at my day job. So if you notice that I’ve been posting less often, that’s why. I’m still trying to get myself organized so I can return to somewhat of a regular posting schedule.