END_OF_DOCUMENT_TOKEN_TO_BE_REPLACED

It has been a LONG time since I did an income report here on One Little Project. I know. I’ve been slacking! (I’ll explain why down below…) But I’m hoping to catch up with the ones I missed. So I’m writing this in June and backdating it. (Sorry!)

I have big news. I quit my day job to become a full time blogger. Which is crazy. And insane. And exciting. But I’ll write more about that below! 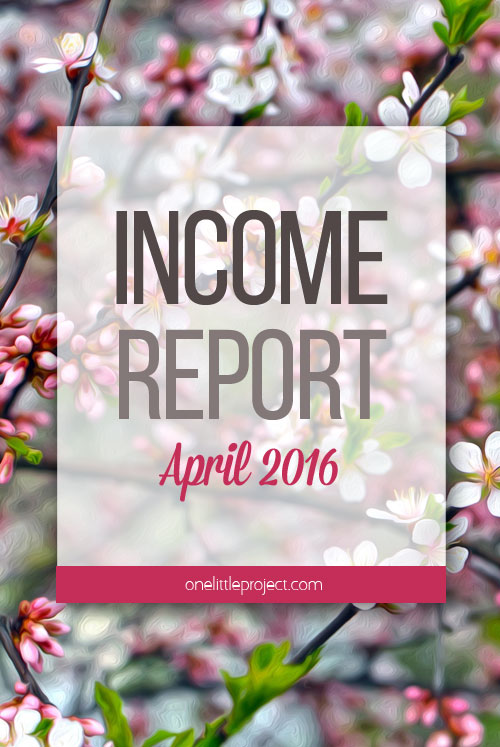 If you follow my income reports, you might have seen that in January 2016, where I left off the last income report, I went back to work at my day job. It didn’t go well. I have three young kids, and it was unbelievably stressful to coordinate all of their schedules on top of my own schedule. I thought I could do it all, but I was wrong, and there was no room left for my blog. So I had to take a break from blogging for a few months, just to keep my sanity.

So I did one of the craziest things I’ve ever done. I quit my job to become a full time professional blogger. Wow. I never thought I would EVER say those words! But I love blogging. I REALLY LOVE blogging. So this is a dream come true for me! It’s not exactly the same income as my job as a Mechanical Engineer yet, but it’s getting close, and I’m pretty confident my income will get past what I made at my “proper” job within a year or two.

My husband told me at the end of last year that once my blog brings in $2,500 consistently for 6 months, that I could quit my job. Not that either of us consider that a full time income, but it was the benchmark that he set. Somehow, it made him feel comfortable that if I could meet the $2,500 for 6 months, that my blog was going to consistently bring in enough money for us to survive. (Keep in mind that I’m Canadian, so I get paid 30% more than all the USD incomes on this page. I never knew I’d be so grateful for a poor Canadian dollar!). I feel terrible for going back to work for such a short period of time (I lasted 4 months, and I was only there part time), but I just couldn’t handle it.

This blog has started to bring in enough money that it’s a real, viable business, and let me say, that I couldn’t be MORE EXCITED!! So now, more than ever, I have to take this blogging thing MEGA seriously, because it’s what’s going to pay the bills!

Now it’s really going to get interesting to see how everything grows!

I had a grand total of 1 blog post that I published in April. Which is obviously terrible, but this is one of the reasons I love blogging and the whole concept of passive income – The train keeps on rolling, even though I’m no where in sight! If I took a month off from my day job, you better believe I wouldn’t be getting ANY money. So I definitely appreciate the flexibility of blogging!

So there you have it. I took more than a month off from blogging, and I still made a decent income (roughly $3,500 Canadian, if you don’t want to calculate it). Have I mentioned that I love passive income?

April is a dreary month for pageviews. It probably doesn’t help that I keep taking time off from blogging during March and April, so I don’t have a whole lot of appropriate seasonal posts. So my pageviews have been going down, down, down. I’m hopeful I’ll be able to get them up next year, but for now, this is how it looked.

Pageviews were down about 25% from March, BUT they are up almost 70% from April 2015, a full year ago. So definitely remember, if you’re assessing your progress by your pageviews, the most important comparison is how you were doing last year, not last month. Things have grown on One Little Project in the last year, and even though my pageviews are down from last month, I know I’m heading in the right direction overall.

It’s interesting to see what posts are popular on their own merit when you aren’t putting any effort into promotion or creating new content. These are the posts that got the most pageviews last month. I didn’t pin them. I didn’t post them on Facebook. They just seem to have been what people managed to find on their own – which just happens to be some of my all time, most popular posts. Go figure.

At the end of January, I was invited by The Blogger Network to participate in a beta test for “Native Ads”. Those are the ones that slide in from the left or right side. They’re awful. Believe me, I get it. I can’t stand them. But the crazy thing is, my RPM has been through the roof since they put them up. So yes, I admit it – I have a LOT of ads on this site. But my RPM has gone up from $5.44 in January to $9.06 in April. My goal for the entire year was to get my RPM to $10, so it’s kind of crazy that it’s happening without me putting effort into it.

My bounce rate is generally 85%, and it didn’t change when I added all of the obnoxious ads. People tend not to stick around here, but that’s okay. I’ve checked my Google Analytics thoroughly, and oddly enough, I haven’t reached a point where the number of ads on my site affects my bounce rate.

So I’m sorry for the annoying ads that pop up. I really am. But I need the income right now to support my family. So until I find other methods to bring up my RPM, we’re going to be stuck with them. At least they have an “X” that you can click out of them.

That’s it for now! I’ll be publishing more income reports in the next few weeks to try to make up for the ones I missed, so check back every once in awhile and keep an eye out!