END_OF_DOCUMENT_TOKEN_TO_BE_REPLACED

Hello again! It’s Alicia from The Baker Upstairs, and I have a super fun and delicious breakfast recipe to share with you. These cinnamon waffles are one of my family’s favorite breakfast recipes, and I love that they are so easy to make. They’re the perfect way to make any breakfast extra special!

If I had to choose a favorite breakfast food, I think waffles would be pretty high on the list. Whenever we visit a new breakfast place, I always have to try out their waffles so I can judge whether it’s a good restaurant or not. While I’m particularly fond of chicken and waffles (yum!), I’ll eat just about any flavor of waffle happily. I do have a few rules, though – they have to be crisp on the outside, they have to be light and fluffy on the inside (no rubbery waffles for me, thanks!), and they have to be served hot.

Making waffles at home for me has always been pretty hit and miss. They just never seemed to turn out as well as waffles I ordered at restaurants. A few years ago, I decided it was time to finally master the art of the waffle. I bought a real belgian waffle maker instead of the cheap one I had been given as a wedding gift, and I started experimenting with recipes to see which ones turned out well for me. These cinnamon waffles are just as delicious as any waffles I’ve had at a restaurant, but they taste even better because I made them myself. And as a bonus, having the chance to eat delicious waffles without having to change out of my pajamas is always a win in my book!

The full recipe is at the bottom of this post, but here’s what you’ll need: 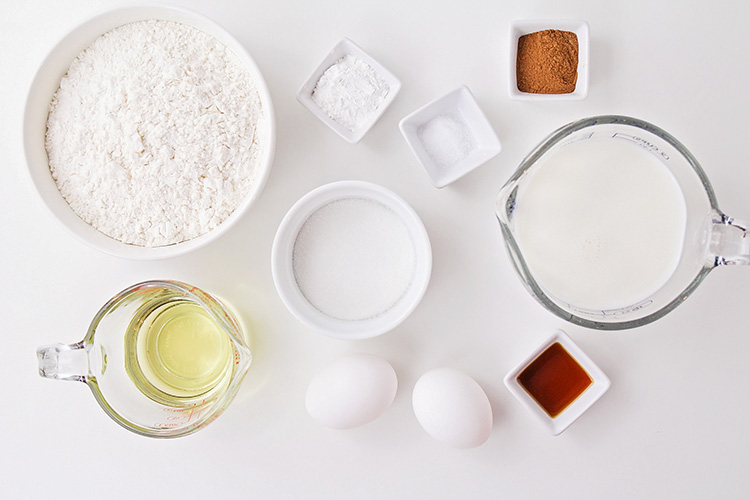 One of my favorite things about this waffle recipe is that it’s so simple to make! I’ve seen a lot of recipes that call for whipping the egg whites separately, or that use ingredients that I don’t normally have on hand. This recipe uses pantry and fridge staples, but tastes totally amazing! Just whisk the wet ingredients together, then add the dry ingredients, and mix until just combined. Let the batter sit for at least five minutes so it can thicken. 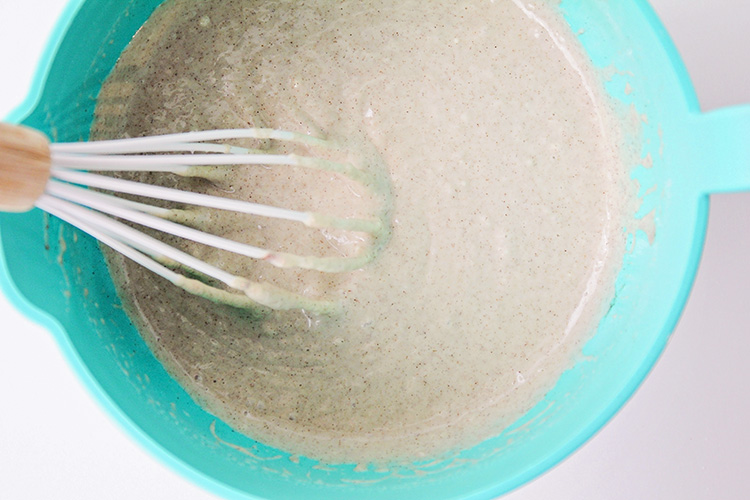 Each waffle iron is different, so you may need to experiment to figure out the correct amount of batter and cook time that works best for your iron. For my waffle iron, 1 cup of batter, cooked for four minutes, is perfect. 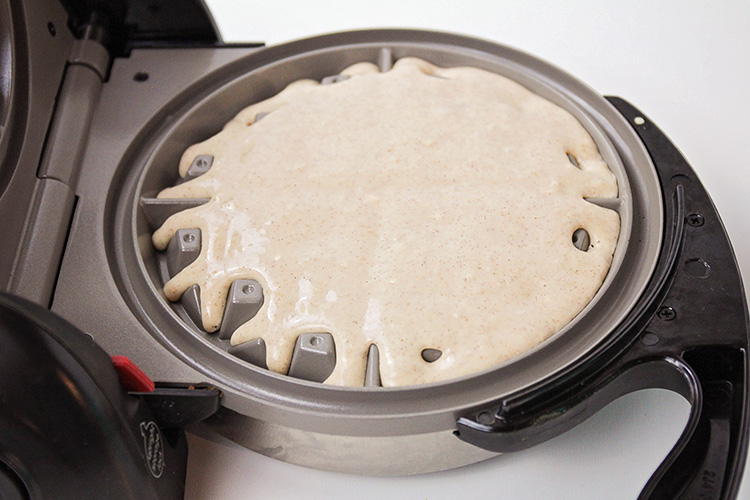 These waffles get nice and crisp on the outside as they cook, while still staying light and fluffy in the middle. To keep them crisp, I like to let them cool on a cooling rack, so the air can circulate around them. You can also stick them in a warm oven while you’re waiting for the other waffles to finish cooking, to prevent sogginess. 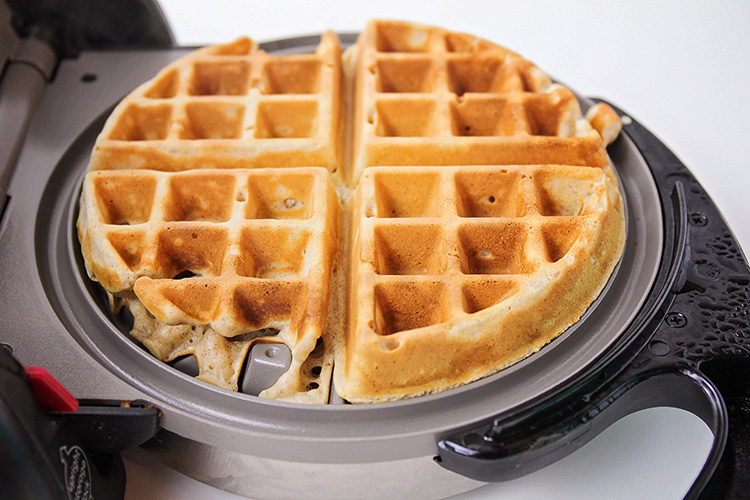 My favorite way to eat these cinnamon waffles is drenched with syrup, with whipped cream and cinnamon on top. (That’s probably not the most health-conscious way to serve them, but they sure are delicious that way!) My homemade buttermilk syrup is also pretty fantastic with these waffles, or even just a sprinkle of powdered sugar and some jam on the side. They’re delicious any way you serve them! 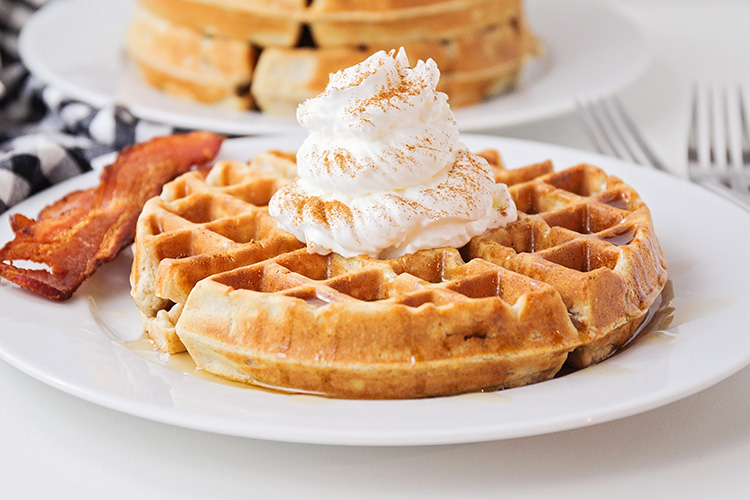 I often double the recipe and store the leftovers in the fridge so my kids can have them for breakfast throughout the week. The best way that I’ve found to reheat them is to pop them in the toaster oven for a few minutes so they can get nice and crisp on the outside again. My kids don’t mind them if they’re a little on the softer side, so if I’m feeling lazy I just microwave them for 30 seconds or so. They also freeze well, so they’re great for planning ahead and stocking the freezer to make mornings easier! 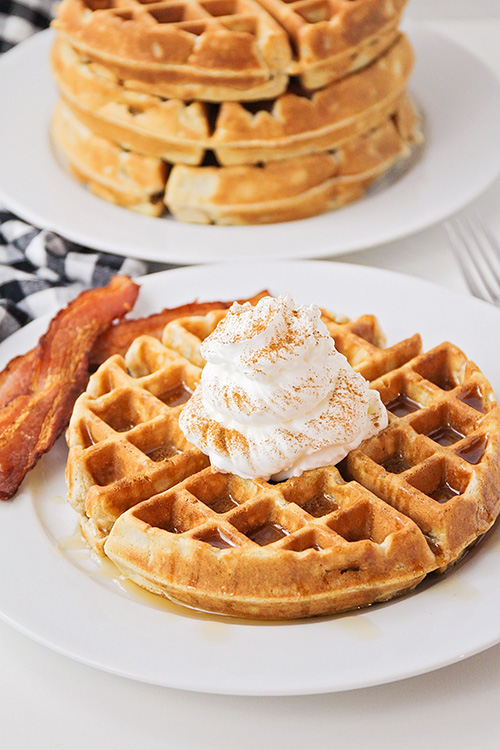 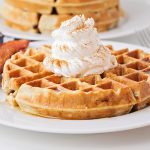 These light and fluffy cinnamon waffles are crisp on the outside, and have the perfect hint of spice!
Prep Time10 mins
Cook Time4 mins
Total Time14 mins
Servings: 4 large waffles

These light and fluffy cinnamon waffles are crisp on the outside, and have the perfect hint of spice. They’ll make any breakfast extra special! 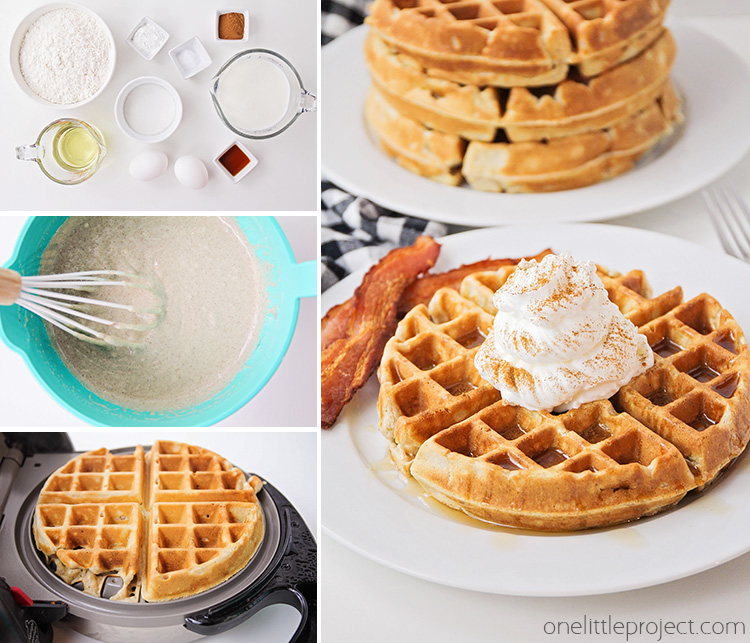