END_OF_DOCUMENT_TOKEN_TO_BE_REPLACED

Hello again! It’s Alicia from The Baker Upstairs, and I have another fantastic recipe to share with you today. This cinnamon roll breakfast smoothie is a healthy and delicious breakfast, packed with protein and fiber. It’s sure to keep you full and satisfied all morning. It’s incredibly flavorful and so delicious, too!

What are your favorite foods to eat for breakfast? It’s a great subject of debate at our house as to what constitutes a proper breakfast. My husband is fond of the more traditional American breakfast foods, and likes to eat a full breakfast every morning, with toast, eggs, sausage, orange juice, and so on. I, on the other hand, will eat pretty much anything for breakfast. When I’m just making breakfast for myself, I tend to eat leftovers from the previous night’s dinner, or a random combination of whatever I can grab from the fridge. I generally like my breakfast to be savory rather than sweet, and have been known to eat raw veggies, leftover soup, and even (gasp!) cold pizza for breakfast.

My husband is so horrified by my breakfast choices, traditional soul that he is, that he has completely taken over the breakfast-making at our house, at least on the mornings he’s home from work. It has been a great change for me, since I’m generally not in the mood to cook first thing in the morning. He’s made some pretty fantastic breakfasts, from eggs benedict, to waffles, to breakfast tacos. I love that I get to sleep in a little later, and don’t have to put any effort into breakfast. One thing I always have energy to make, though, is a good breakfast smoothie! They’re simple to make, ready in just a few minutes, and are easy to customize with so many fantastic flavors. This cinnamon roll breakfast smoothie was tasty enough to win over my whole family, and I love that it’s healthy too!

I was inspired by this smoothie on I Heart Naptime, but I adjusted the recipe just a little to suit my tastes. I like my smoothies on the sweeter side, so I used sweetened almond milk and added a little brown sugar as well. If you don’t like things to be as sweet, you can definitely skip the extra brown sugar, and I’m sure it will still be delicious. The combination of cinnamon and vanilla tastes just like a cinnamon roll! 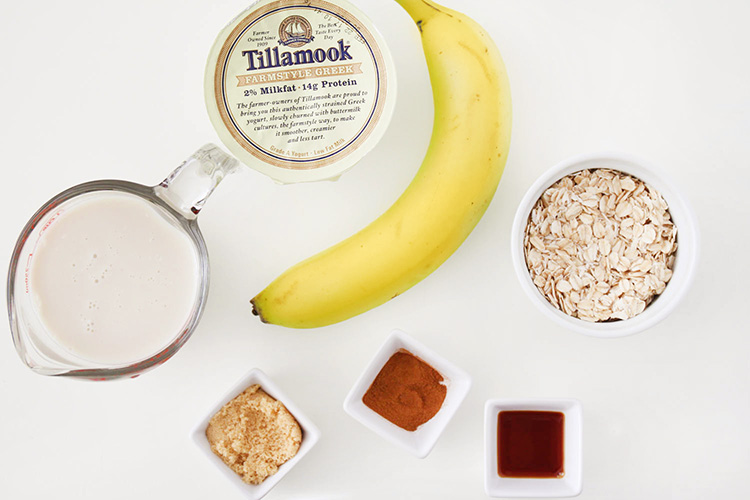 This smoothie really could not be easier to make! You just add all of the ingredients to a blender or food processor, and blend until smooth. It helps if you have a more powerful blender, like a Blendtec or Vitamix, but I found that my Ninja blender did just fine. 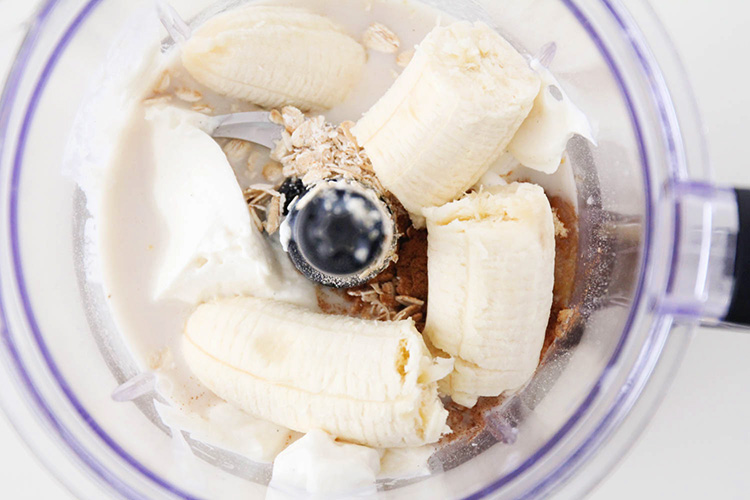 It’s important to blend the oatmeal until it’s very fine, or the smoothie may be a little gritty. You’ll want the smoothie to be perfectly smooth and well-blended. Using a frozen banana helps to keep the smoothie cold and give it a little more creaminess. If you don’t have a frozen banana on hand, though, you could just use a fresh banana and add a few ice cubes to the smoothie. 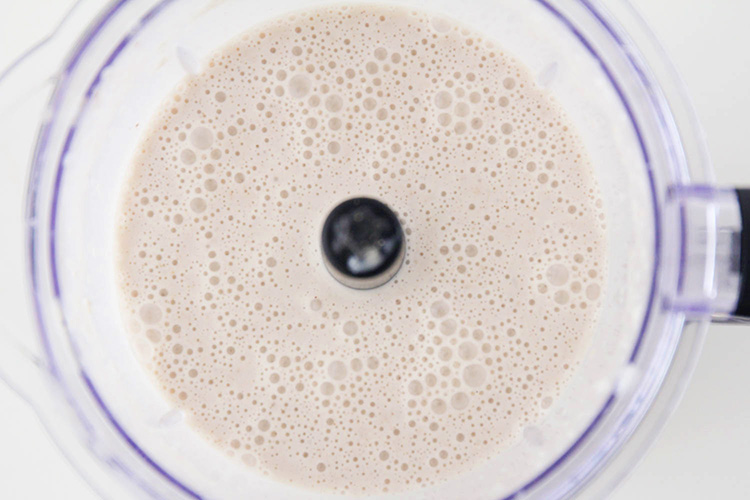 I added a quick sprinkle of cinnamon to the top, and the little boost of flavor from it was fantastic. This smoothie is so creamy, smooth, and so delicious. I love that it’s a healthy breakfast that tastes like dessert! 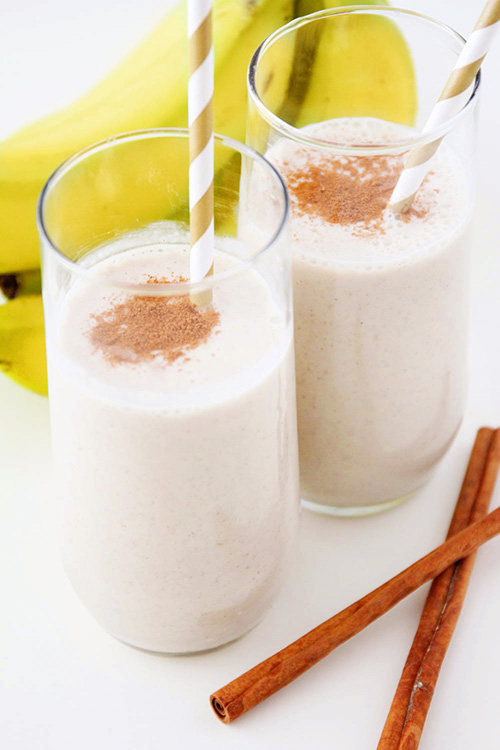 Using greek yogurt in the smoothie bumps up the protein and also makes it extra creamy. The oatmeal adds fiber and makes it thicker and heartier. You could easily make the smoothie dairy free by using non-dairy yogurt, and it’s gluten free as long as you use oats that are gluten free. My family doesn’t have any dietary restrictions, but I really like having easy recipes on hand that I can use when I have friends over who do have restrictions. 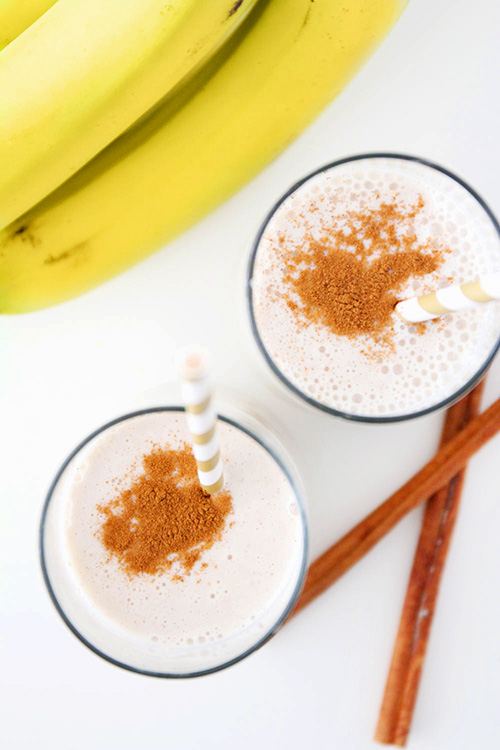 This cinnamon roll smoothie is simple, tasty, and incredibly easy to make. It’s definitely a new favorite at my house! It may just be good enough to make me want to put down my cold leftovers, and have a smoothie for breakfast every day instead. 🙂 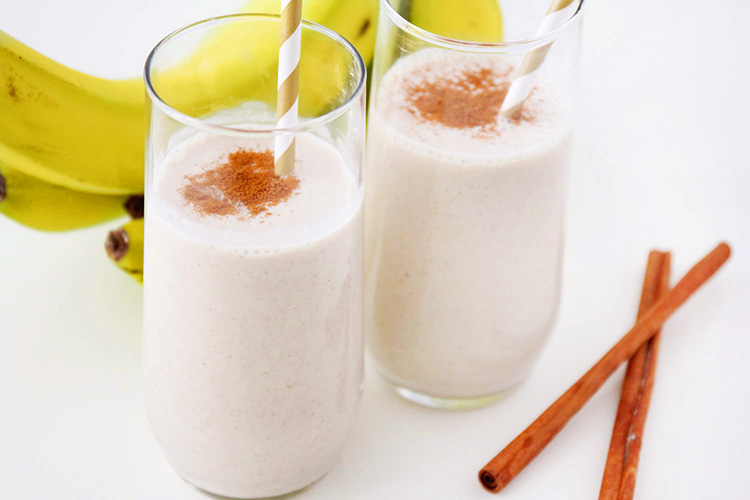 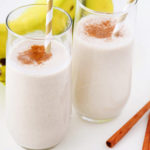 This cinnamon roll breakfast smoothie is the perfect healthy way to start the day! 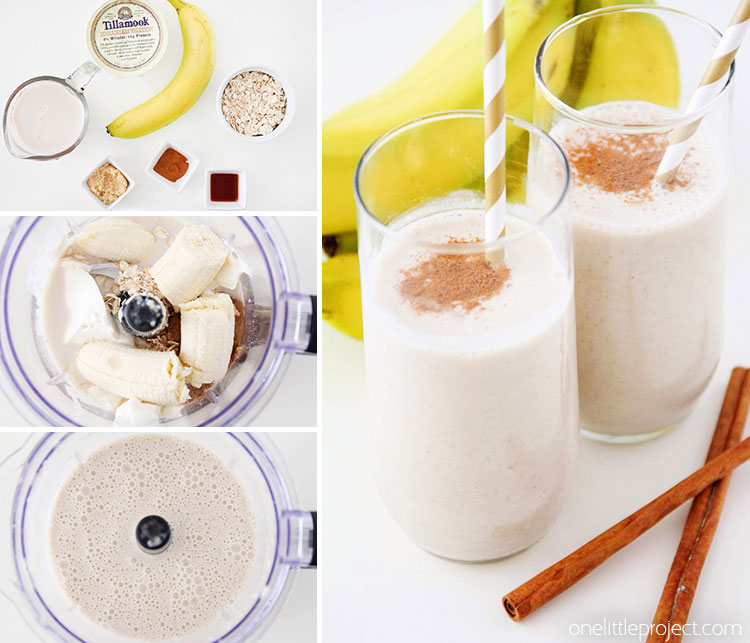 This cinnamon roll breakfast smoothie is the perfect healthy way to start the day! It’s loaded with protein and fiber, and so delicious too!