END_OF_DOCUMENT_TOKEN_TO_BE_REPLACED

Moms are supposed to bake cookies. Delicious cookies. Especially if those moms are bloggers. Then those cookies better be the best darn cookies you’ve ever tasted. But I have a bit of a secret. I don’t bake cookies very often.  (The pumpkin chocolate chip cookies I made last week were the first cookies I’ve made in over a year!) And I really don’t bake much period. Scandalous, I know, since I’m both a mom and a blogger.

If I’m going to make something for dessert, it usually ends up being something fun that you’ve never seen before (or at least something I’ve never seen before). So when I saw this idea for Sky Jello on Pinterest I wanted to try it! I love that it’s the easiest recipe ever and you can make it with zero baking. And zero baking means there’s much less of a chance to mess it up! It’s not cookies, but it ends up looking awesome, just like the skies of a bright summer day, with white fluffy clouds. And who can resist white fluffy clouds?

This is a super fun dessert that’s great for a party, but easy enough that you could have it on a regular weeknight. And it actually tastes good (well, it tastes good if you like jello. If you don’t like jello, you’ll just have to enjoy how pretty it is…).

This is beyond simple. So simple, that you’ll wonder why you never thought of doing it before! You’ll need two small boxes of blue jello and some whipping cream.

My first recommendation if you make these is to use smaller mason jars. I used 2 cup mason jars, and not only are they way too big for a single serving, but they also use up so much jello, that even with two boxes, I could only make 3 jars. If you have 1 cup jars, I think those would work much better. 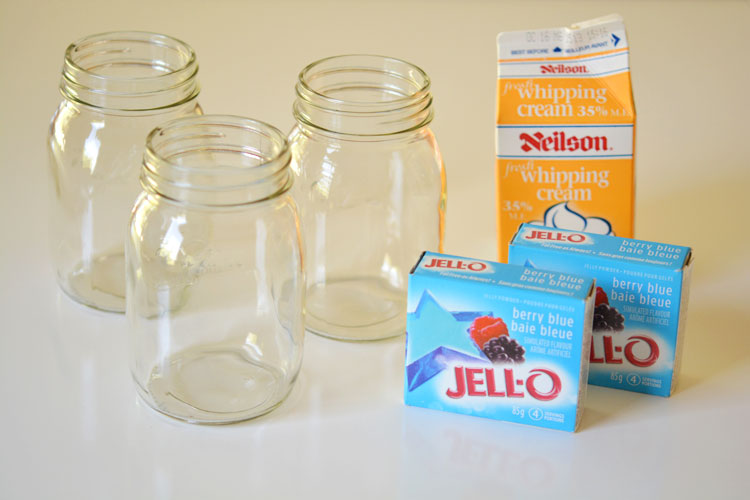 Pour out the two boxes of jello and add 2 cups of boiling water. Stir it until everything is dissolved. 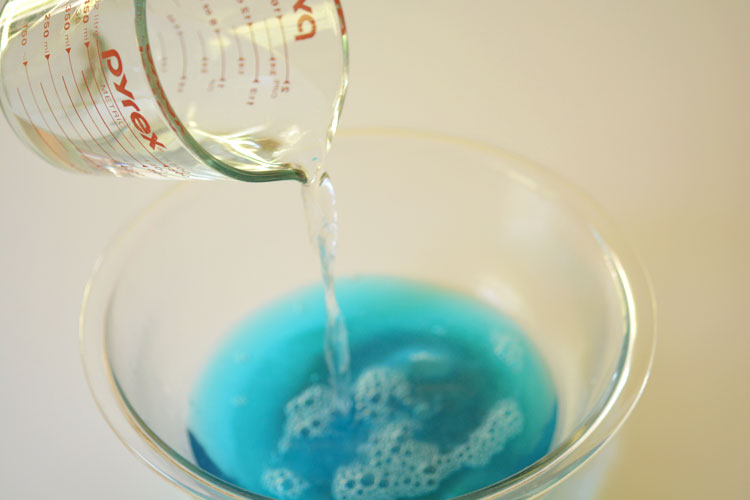 I used the “quick set” method of making the jello. This wasn’t an exact science, but I filled my two cup measuring cup with ice cubes. It was conveniently one full tray of ice cubes, at least from the regular sized ice cube trays that we have in our freezer. 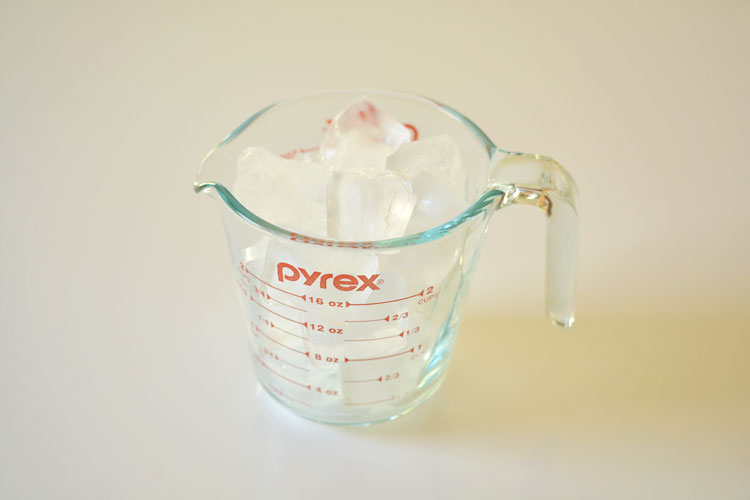 Once you pour the ice into the jello, it starts to firm up fairly quickly. 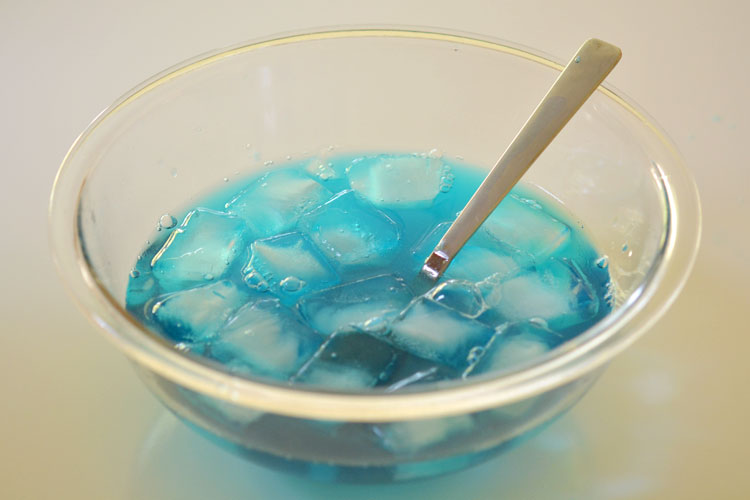 You can see the gloppy looking texture it gets in the photo below – this is what you want. You can put it in the fridge for 20 minutes if yours isn’t firming up. You need it to be firm enough that the whipping cream won’t sink through it.

I had trouble getting the ice cubes to dissolve fully, but in the end, it really didn’t make a difference. I still put the undissolved ice cubes into my jars and after I refrigerated it, it all firmed up no problem. 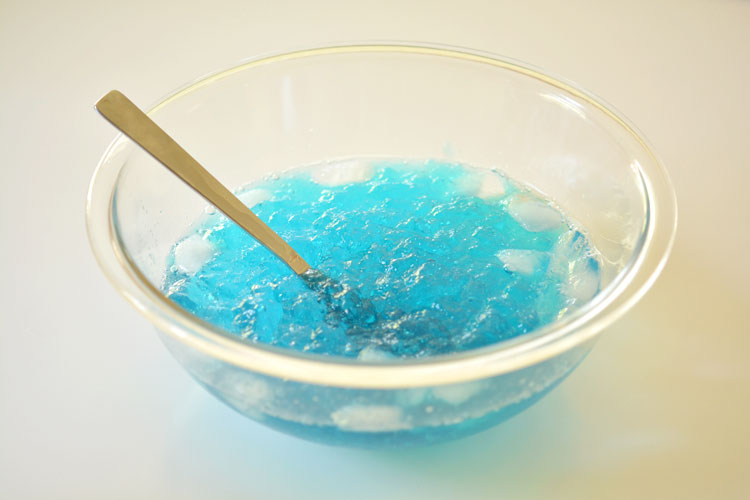 Whip up about 1 cup of whipping cream. I make my whipping cream from scratch, but if you are really in a hurry, you could just as well use the spray can whipped cream or even Cool Whip. 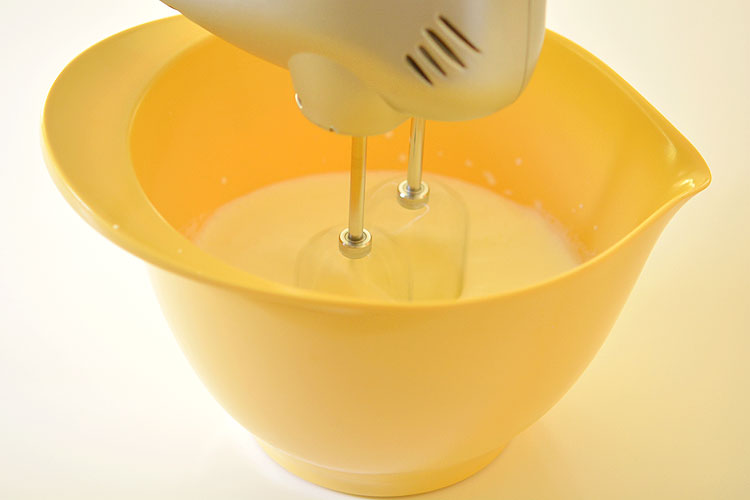 Start by using a spoon to drop some blue jello to the bottom of the jar. If you make a mess on the rim, just wipe it up at the end with a paper towel. 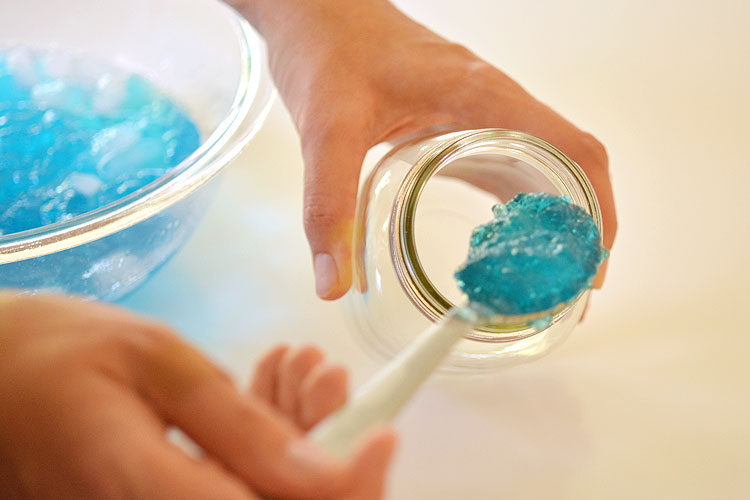 Then take two generous spoonfuls of whipped cream and scoop them on top of the jello. Use the spoon edge to slightly press them against the glass and shape them into cloud forms. 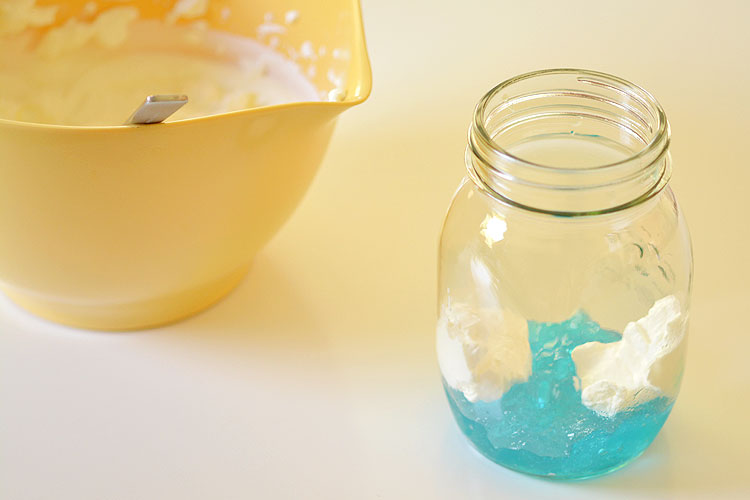 Then add another layer of blue jello on top so that it just covers the top of the whipped cream. 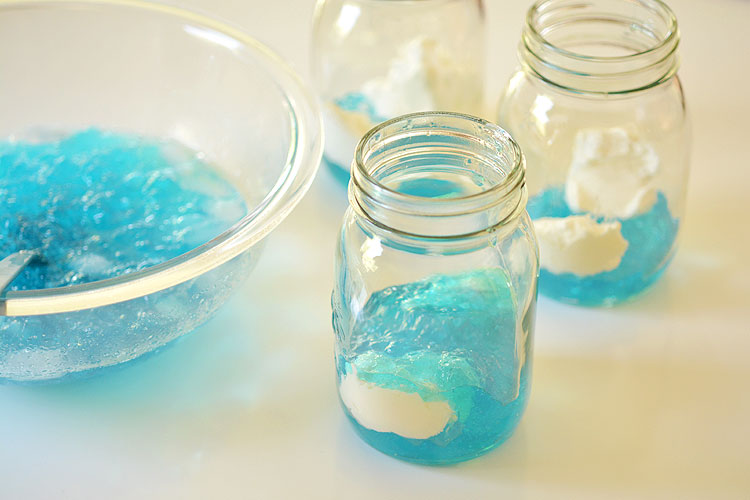 Then repeat, alternating the sides of the whipped cream clouds. You can see the sequence in the photo below: 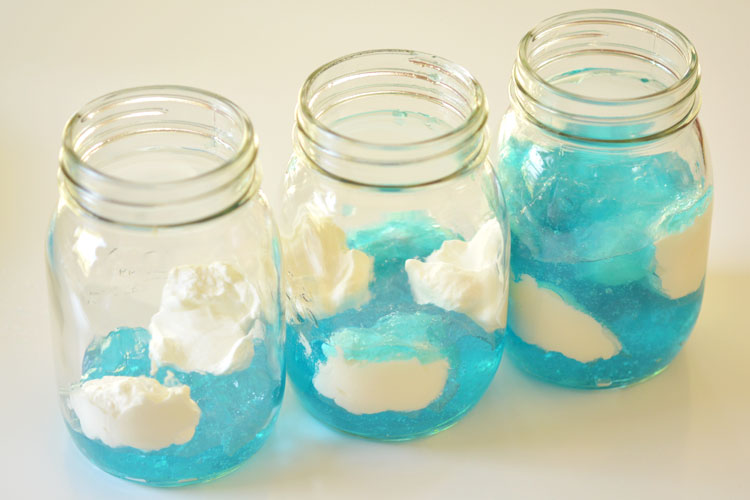 I was starting to run out of blue jello, so I added a few globs of whipped cream to the middle of the jar, just as filler. You can kind of see it through the blue jello. It adds more texture, and stretches the Jello just a little bit further. 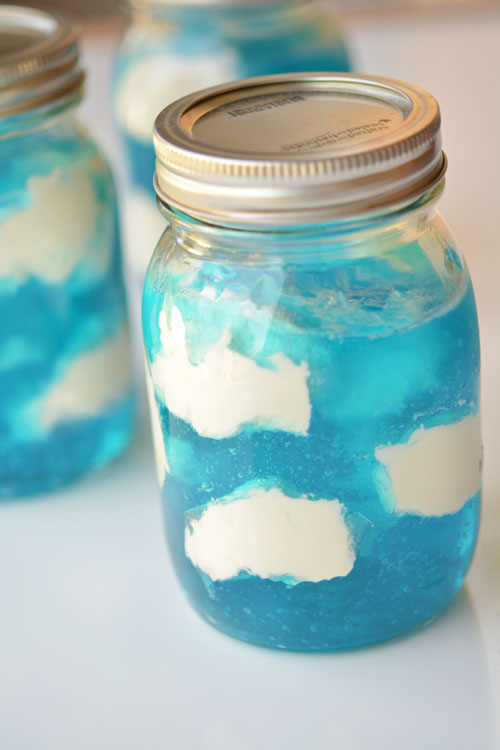 When you’re all done, you have fluffy white clouds, floating in a blue sky! I love the way it looks! 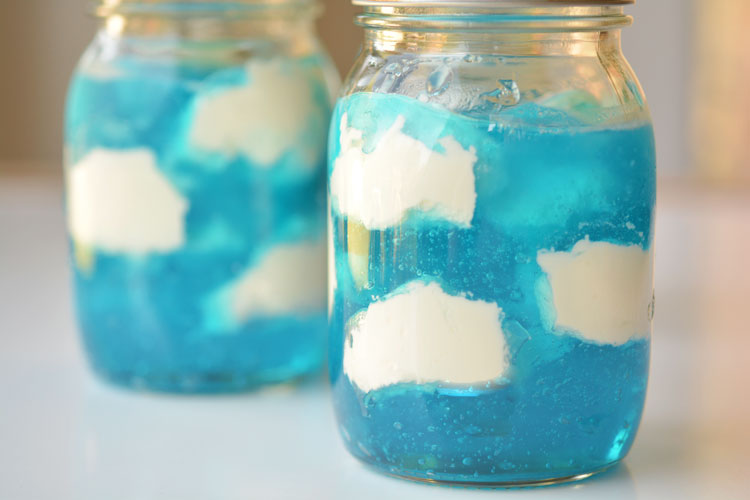 Refrigerate them for about 2 to 4 hours before serving. 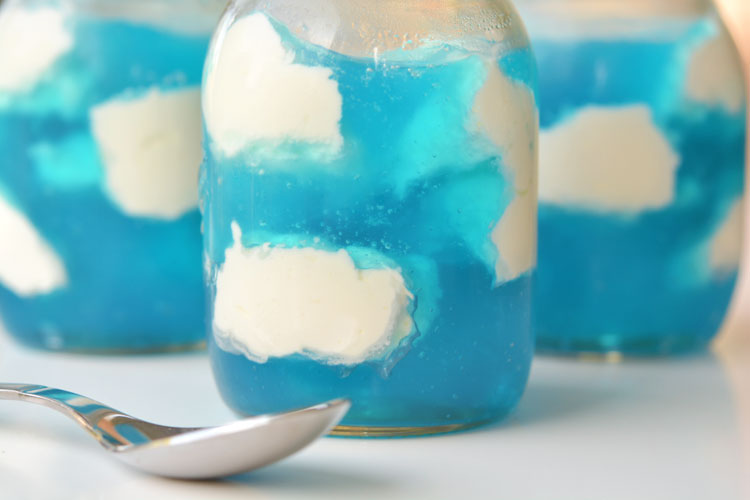 These jello sky jars make a super easy and fun dessert! They definitely aren’t single serving though. Between me, my 5 year old and my 3 year old, we were only able to eat half of one jar yesterday after dinner. A little goes a long way! 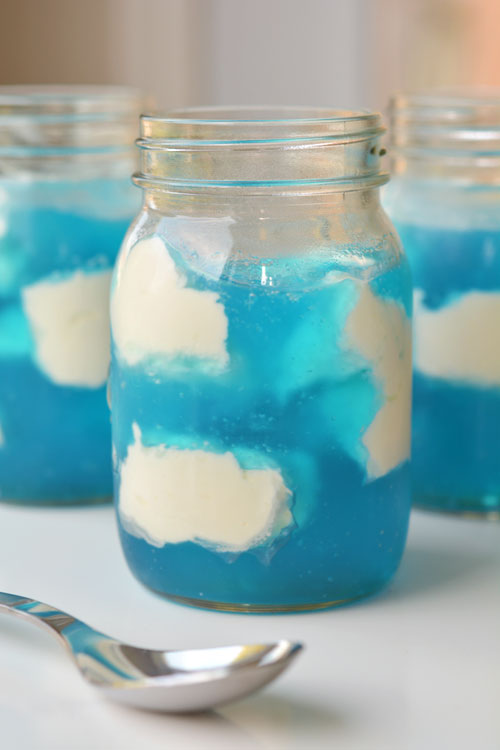 I love how light and fluffy the clouds look when they’re suspended in the jello. 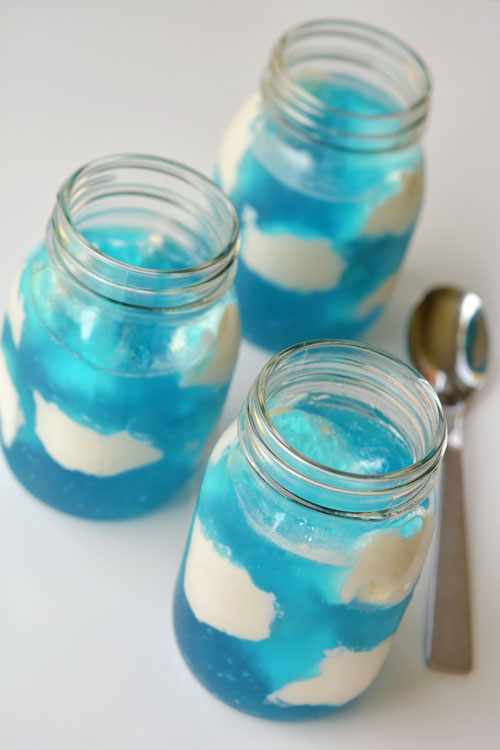 And it also helps that this dessert is really easy and it doesn’t take much time to put together, unlike some other layered jello desserts. 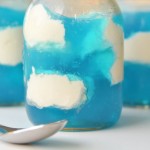 This sky jello with fluffy clouds is super easy, quick to put together and makes a fun dessert! 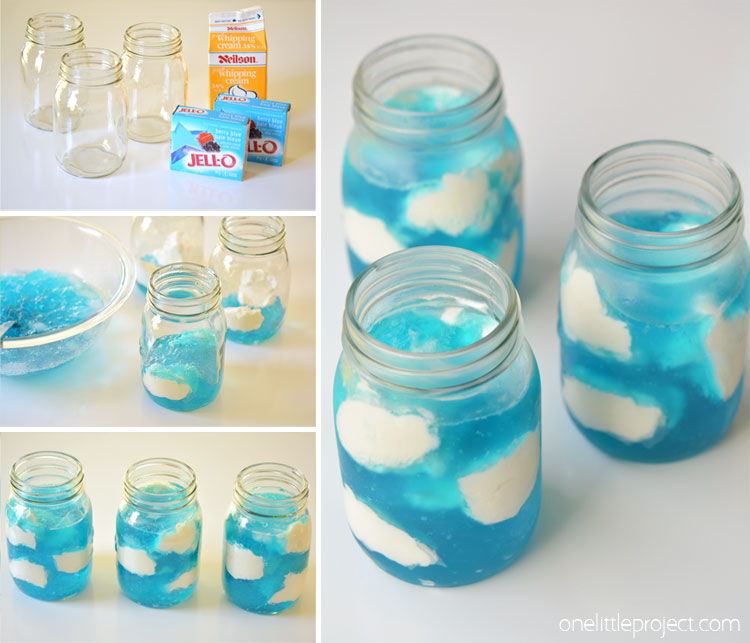 This sky jello with fluffy clouds is super easy, quick to put together and makes a fun dessert! You can make the whole thing in about 15 to 20 minutes, and then you just need to let it set. One 2 cup mason jar probably feeds 4 people, but if you use smaller jars, you can make them single portion size. And if you make them in a tall, narrow glass you can make single serving sky jello parfaits. These make a fun dessert for parties, but they are easy enough to make as a weekday dessert.

Wait! Be sure to check out our other awesome Jello recipes before you go! 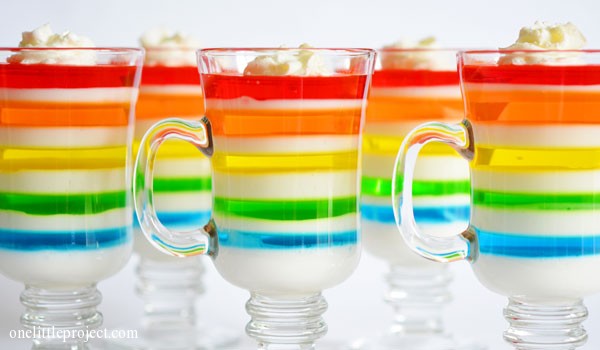 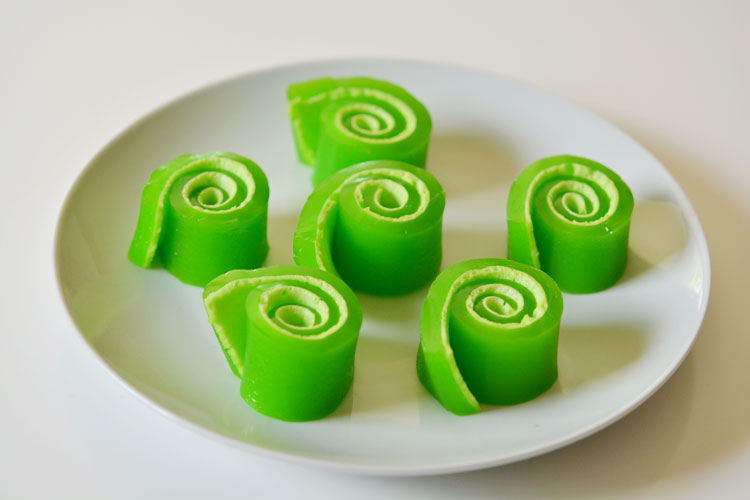