END_OF_DOCUMENT_TOKEN_TO_BE_REPLACED

This post is in partnership with Universal Pictures. As always, the opinions are entirely my own.

How to Train Your Dragon: The Hidden World will be in theaters on February 22! The latest movie in the series looks so fun and we can’t wait to see it!

We put together a fun little tutorial for how to make pom pom dragons, inspired by Toothless, the main dragon character in the How to Train Your Dragon movies. We also made a pom pom dragon of the new female dragon, Light Fury. They’re super cute, simple to make at home and the kids loved playing with them!

My 8 year old loves Toothless, the main dragon character. Her birthday is coming up and she’s now asked for a stuffed Toothless dragon, and a stuffed Light Fury dragon…… or if she can’t have those, she wants a real live hamster – I’m hoping she’ll be happy with the stuffed dragons! lol

She really wants to go to the movie theater to see the new movie, How to Train Your Dragon: The Hidden World when it comes out. She begged me to print her a copy of the movie poster (below). Then she cut it into a heart shape and she’s been carrying the picture around with her all week. Super cute! She LOVES that there’s a female dragon in the new movie! 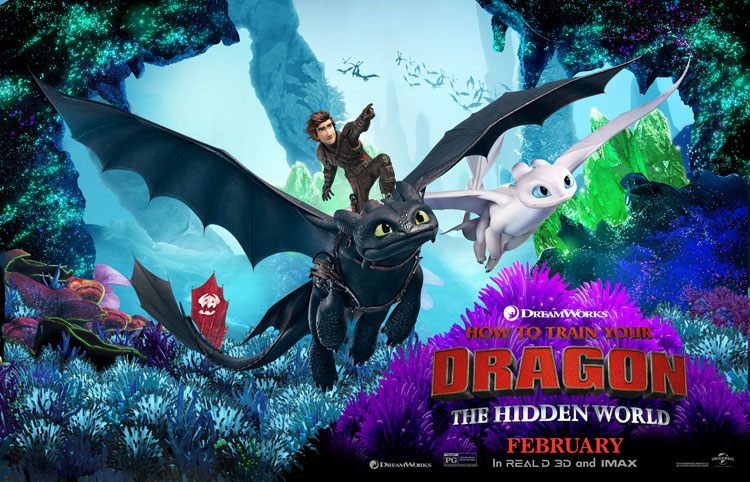 In the new movie from DreamWorks Animation, Hiccup is now the chief and ruler of Berk, with Astrid at his side. A new female dragon, Light Fury suddenly appears and they have to set off on an epic adventure to a hidden world thought only to exist in myth.

It looks like such a fun movie to take the whole family to see! Here’s the trailer:

HOW TO TRAIN YOUR DRAGON: THE HIDDEN WORLD – In theaters February 22

The image above features Toothless, the main dragon character in the movie. This little guy is such a fun character and he’s super cute! He was the inspiration for our pom pom dragon craft.

How to Make Pom Pom Dragons

Here’s a list of affiliate links to products on Amazon that are similar to the supplies that we used to make this craft. Here’s what you’ll need:

I used regular thickness (not chunky) 100% acrylic yarn. Chunky yarn is a lot easier to work with when you’re making pom poms, but I liked the gray colour of the regular thickness yarn best for Toothless the dragon.

The regular thickness yarn works perfectly well, you just have to wrap it more times to make a full looking pom pom. 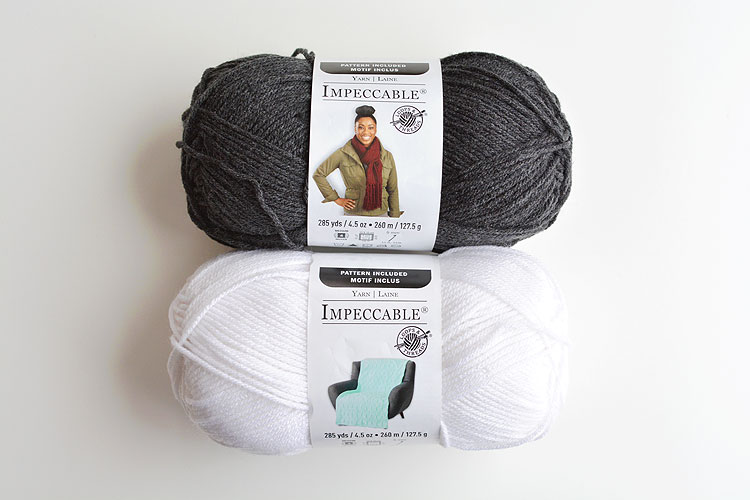 You can buy a pom pom making tool if you like, but I find that using your hands to make pom poms works perfectly well!

Start by cutting an 8″ long piece of yarn and slide it between your middle fingers like in the photo below. 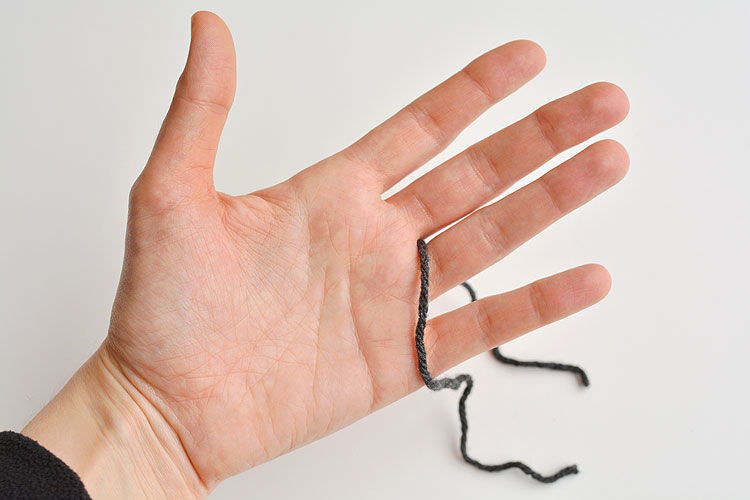 For the large pom pom, wrap the yarn around four of your fingers, about 130 times. (If you’re using chunky yarn, you only need to wrap it about 70 times). 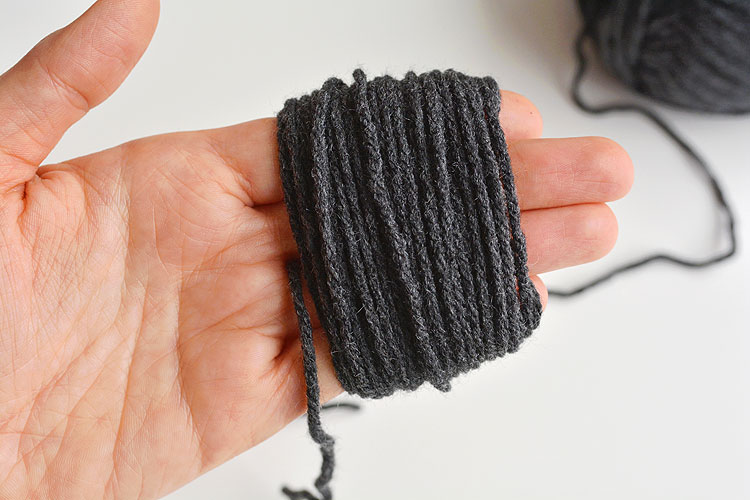 Remember that 8″ long piece of yarn you had between your middle two fingers? Carefully tie it around the windings of yarn – just snug enough to hold the yarn together so you can slide it off your fingers. 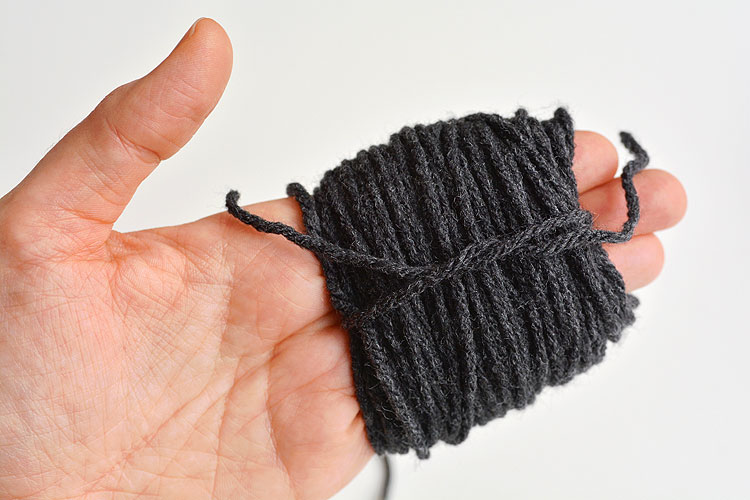 After you’ve slid the yarn off your fingers, pull that loose knot as tight as you can. Then tie it in a double knot to secure it. 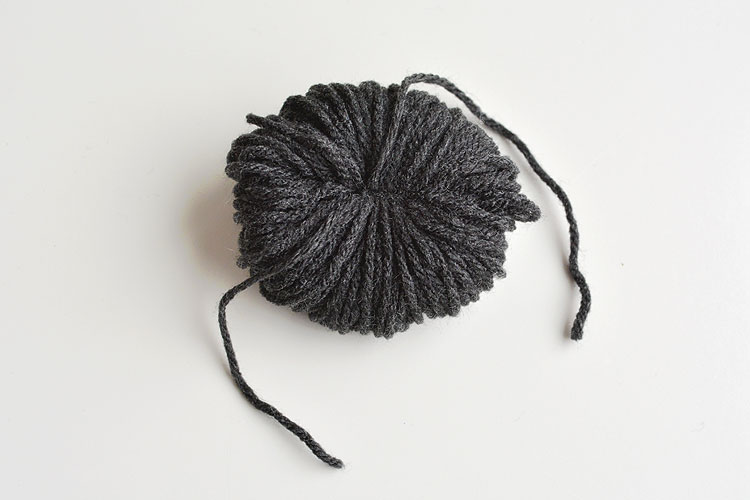 Cut the middle of the loops evenly using a sharp pair of scissors, working your way around the pom pom until all the loops have been cut. 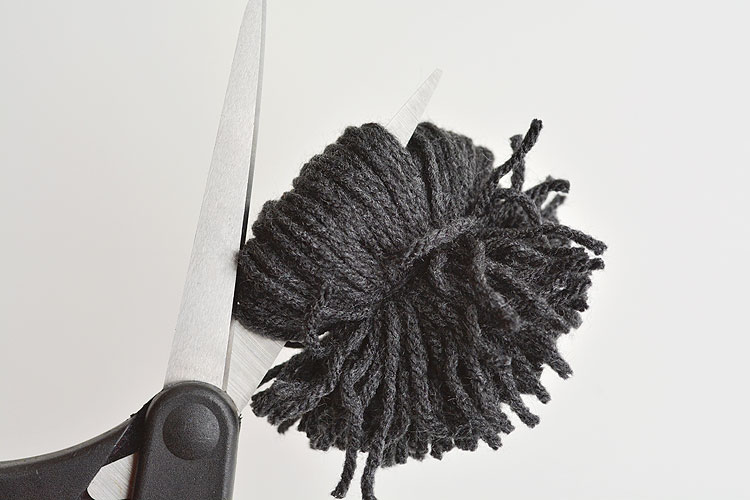 For the smaller pom pom, follow the same instructions – except this time, only wrap it around two of your fingers. 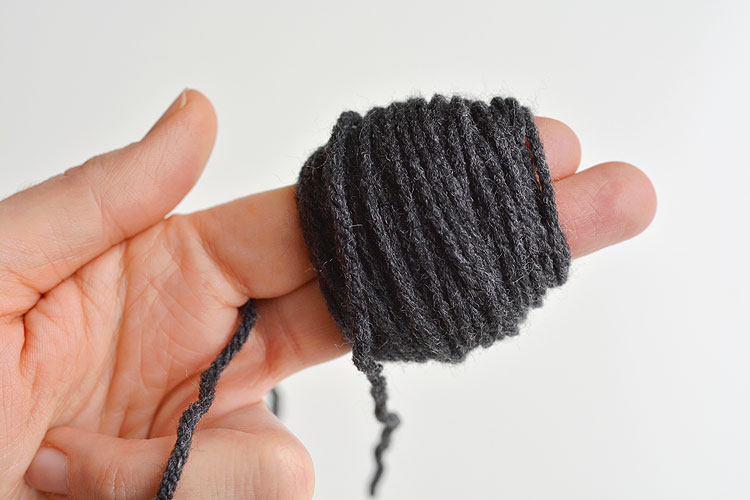 After you’ve cut the loops of the pom poms, they look pretty messy – just like the pom poms on the left in the photo below. Don’t worry! They’re supposed to look like this. 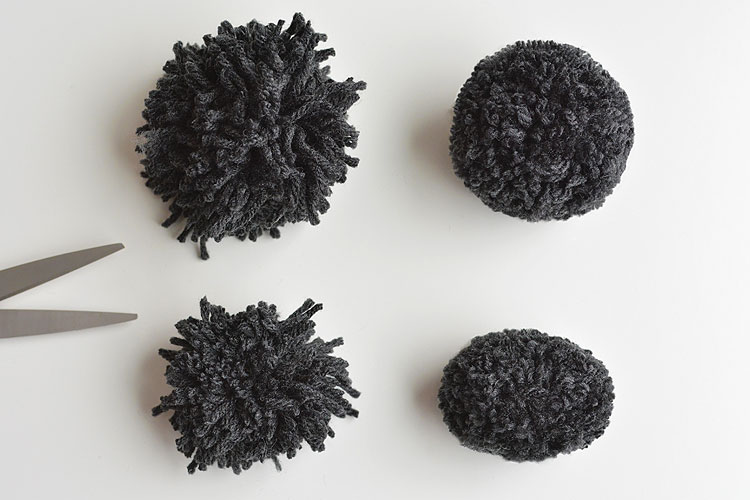 Then you’ll need to cut out the details for your dragon. I used sparkly craft foam, but you can use regular craft foam, or even thick paper if you like.

Grab a copy of our free printable template here. After you’ve printed it, cut out the shapes, then trace them onto craft foam or thick paper to make the shapes you’ll need.

>>> How to Train Your Dragon Pom Pom Dragon Template <<< 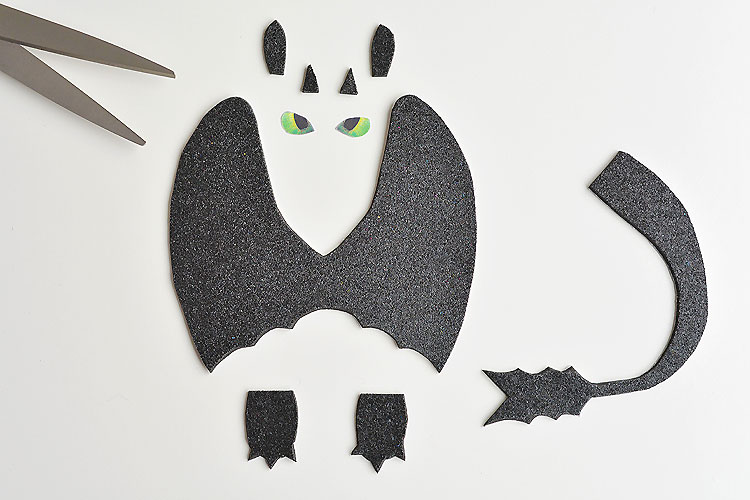 I tried a bunch of different ways to make eyes for these dragons, but in the end, it looked best to use paper eyes from an image of the actual Toothless character.

You can cut out the eyes from the printable template, and use crafter’s tape to attach them to the smaller pom pom. 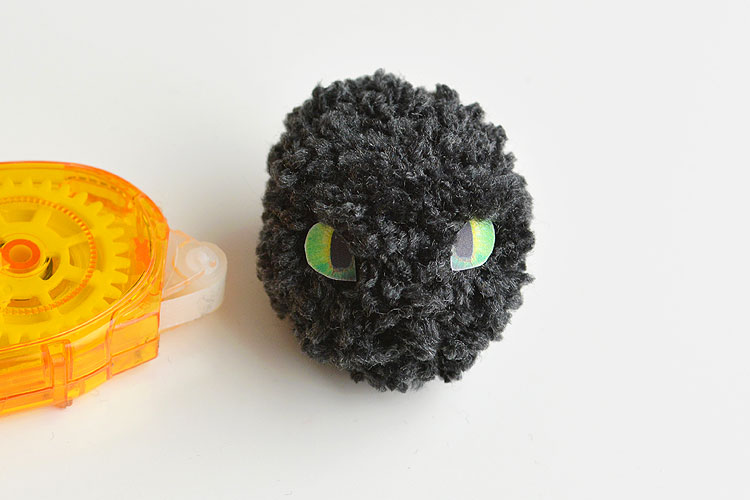 Then use a glue gun to attach the dragon’s spiky horns/ears. 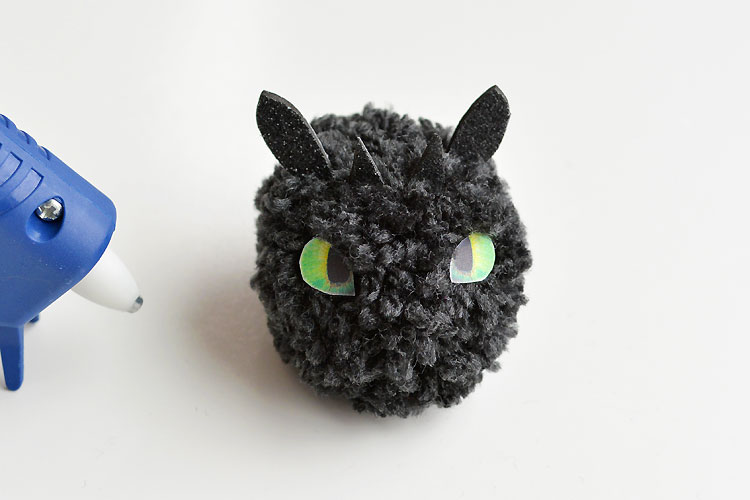 Use a glue gun to attach all of the pieces together.

First attach the small pom pom to the larger pom pom. Then glue the tail and the dragon feet to the bottom of the large pom pom. 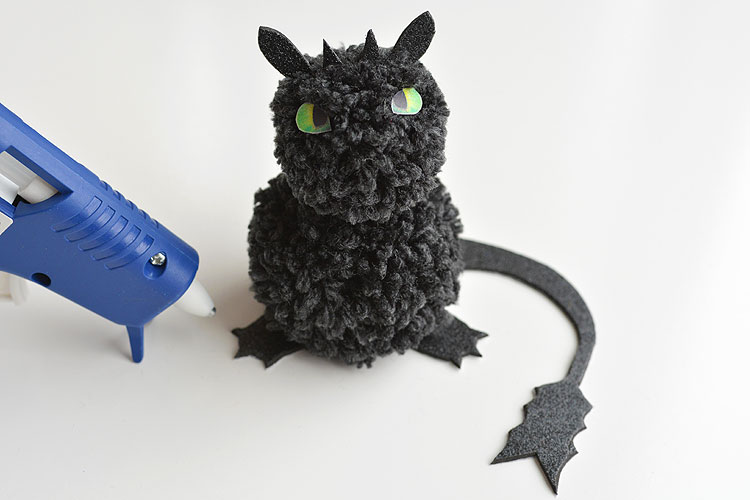 Finally, glue the wings to the back of the large pom pom so the bottom of the wings rest on the table. 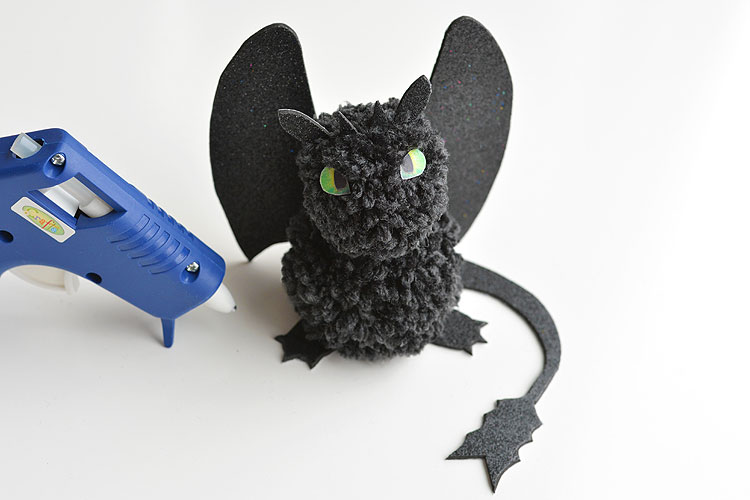 If you want, you can even cut out a small piece of red paper and attach it as the mechanical tail that Hiccup made for Toothless. 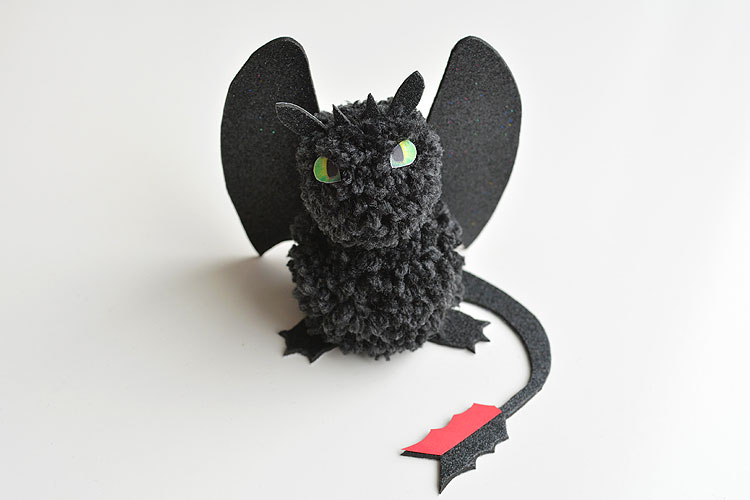 Finally, I used a 6″ long pipe cleaner for each of the two legs. Fold each pipe cleaner in half, then make a small bend at one end for the foot. Then fold back the other end to make the legs the right height. Use a glue gun to attach the two legs to the front of the pom pom dragon. 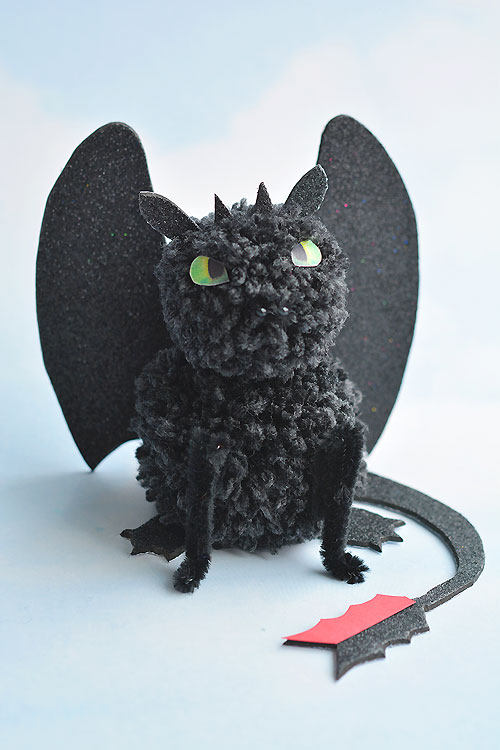 We used white yarn and sparkly white craft foam and made a pom pom dragon for Light Fury, the female dragon too. Don’t they look cute together?? 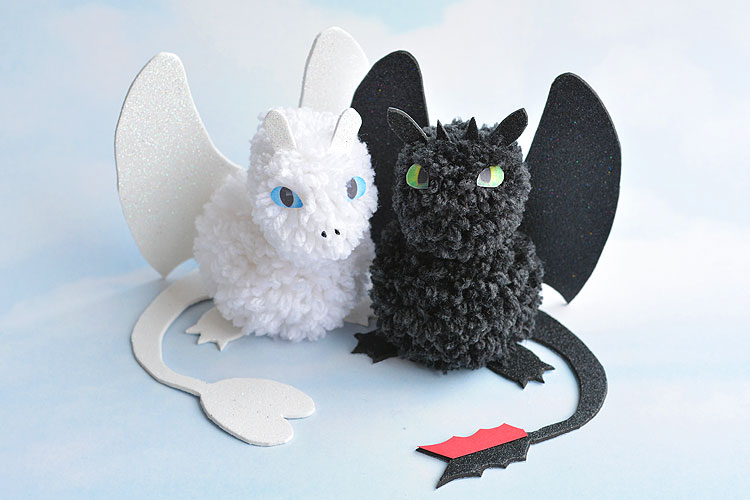 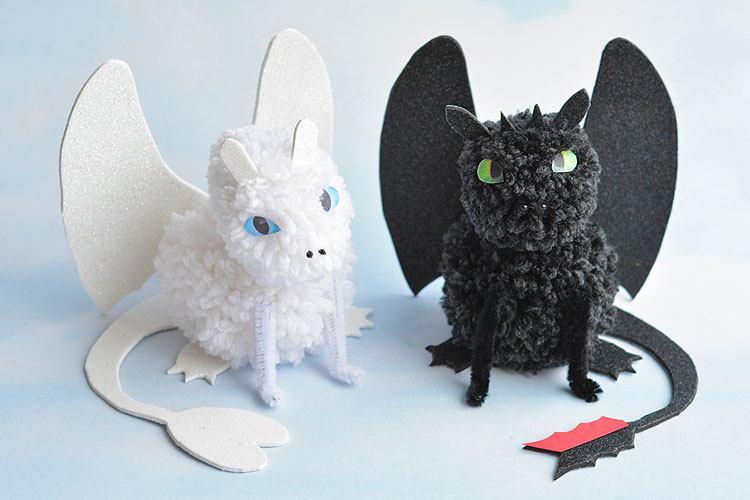 Either way, they’re super cute! And they’re surprisingly easy to make. Who knew you could make so many fun things from pom poms?! 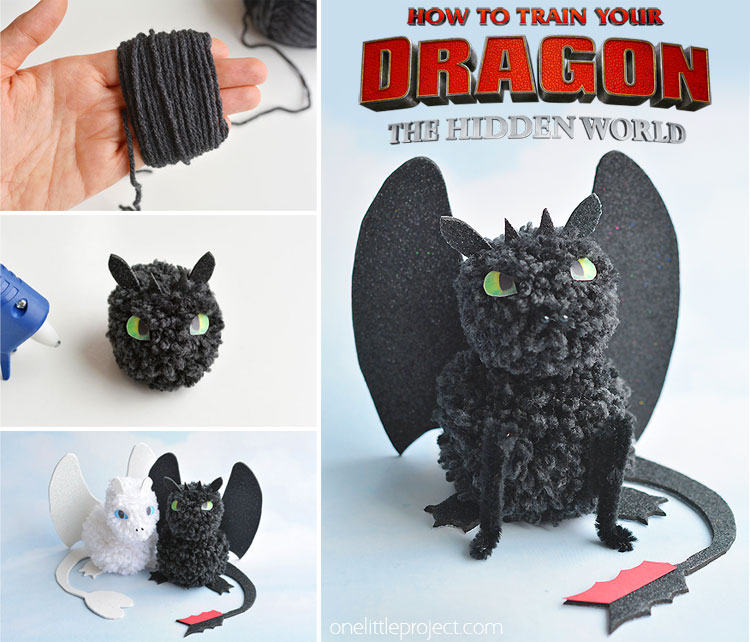 These pom pom dragons, inspired by How to Train Your Dragon: The Hidden World (in theaters February 22) are so fun to make! You can easily make Toothless and Light Fury at home with a few simple materials. It’s so easy to make pom poms just by wrapping yarn around your fingers!

My kids had so much fun helping me with these pom pom dragons. It really helped them connect with the dragon characters and got them so excited about the new movie! They can’t wait to see it! Get your tickets now!