END_OF_DOCUMENT_TOKEN_TO_BE_REPLACED

Get ready for an insanely addictive snack that’s going to keep you coming back for more – this cinnamon sugar chex mix is sooooo good!!

One of the hardest things about being a food blogger is making amazing, craveable, delicious smelling food, and then having to set it out on a table and photograph it without eating the whole batch.  Then the goal of photographing the food is to capture a photo that tries to show you exactly how delicious the amazing snack really is while you’re drooling in the background, using all your strength not to eat the food in the photo.

Staring at this batch of mouthwatering cinnamon sugar Chex mix and not being able to scoop it up by the handful was soooooo hard! I was standing there with my camera in hand, zooming in on those craveable grains of cinnamon and sugar, and the amazing smell was just radiating up from the hot-out-of-the-oven tray.

Look at that cinnamon sugar coating. Doesn’t it make you want to scoop up 6 handfuls!?

This recipe for cinnamon sugar Chex mix is sooooo hard to resist! The sweet buttery crunch is heavenly. And the cinnamon sugar coating keeps you coming back for more! I can’t stop eating it!

My middle daughter came home from school yesterday and said, “This is good. This is really good!” after she tried it. I don’t get a lot of appreciation for the food I cook around here, so any time I get a compliment from one of the kids, I pretty much sit there and soak it in.

Just picture me, as if I was sitting on a beach with my eyes closed with the warm sun beaming down on my face (the sweet smell of cinnamon still wafting in from the fresh batch of cinnamon sugar Chex mix in the background).

Then I always respond along the lines of, “Really!? You really like it!?”, trying to fish for some more compliments. But that’s usually all I get. Sometimes motherhood is a thankless job, but I love a good compliment from my kids!

Check out our video for how to make Cinnamon Sugar Churro Chex Mix:

If you’re craving snacks, here are some of our most popular snack recipes:

The full printable recipe is at the end of this post, but here’s a list of affiliate links showing what you’ll need:

You can use Rice Chex or Corn Chex Cereal. It’s so easy to make and it uses really simple ingredients! The sauce is just brown sugar and butter mixed together. Butter and sugar have to be the best combination ever. Mmmmm… 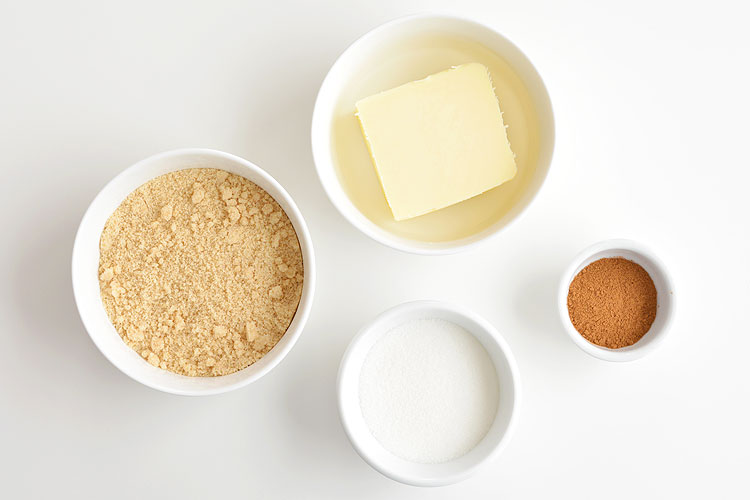 I like to microwave my sauce because it’s easier, but you can definitely heat yours up in a pot on top of the stove as well. It’s basically a super simple caramel sauce. It took all my strength not to lick out the measuring cup after I poured it onto the Chex. 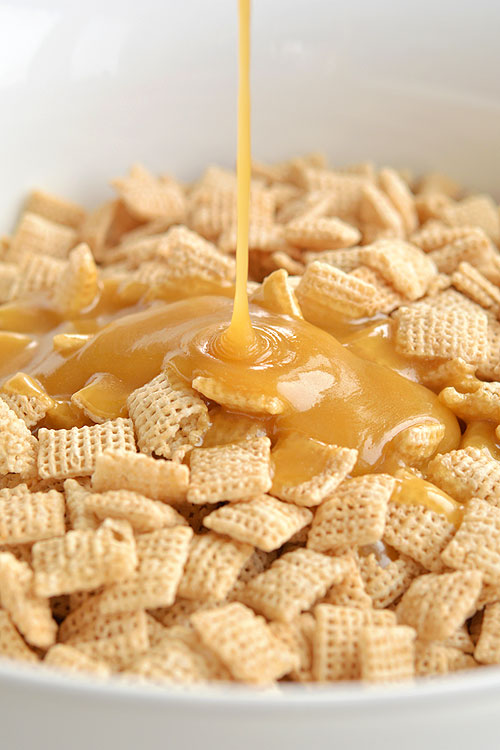 Once it’s all mixed together, set the Chex mix onto a parchment lined baking sheet then sprinkle the cinnamon sugar mixture on top. 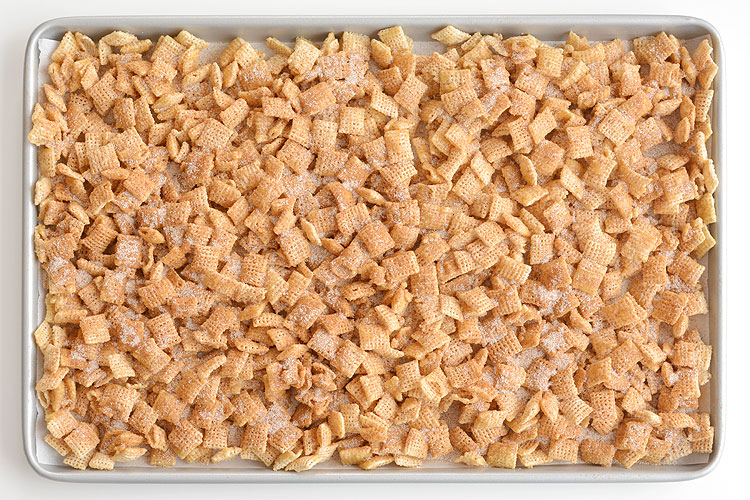 It smells sooooo good when it’s in the oven. And it smells amazing when it comes out of the oven. And when you eat it. And when it’s sitting in a bowl on the counter during dinner, just waiting for you to come back for more. That delicious cinnamon smell. Yum! 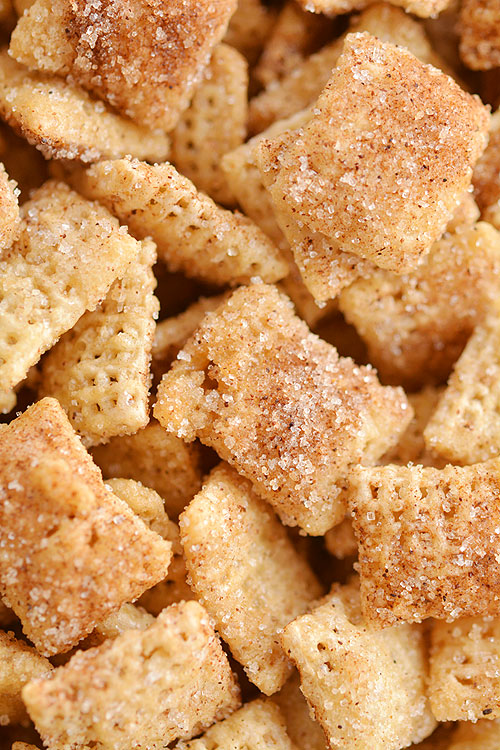 That cinnamon sugar coating is making me swoon! It feels like comfort food. 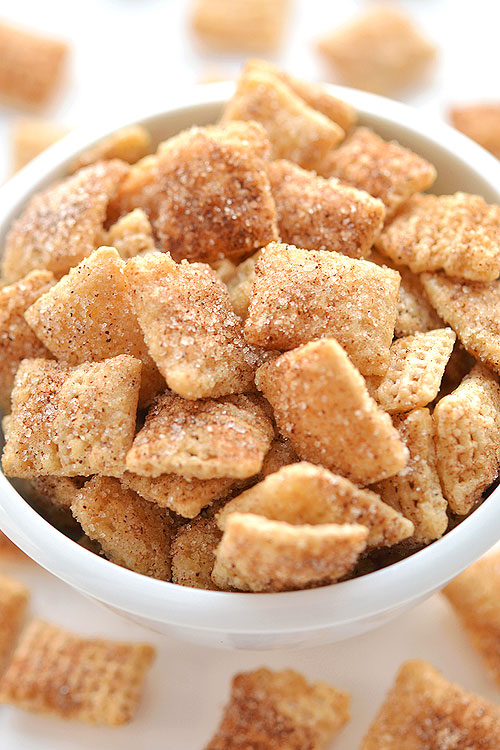 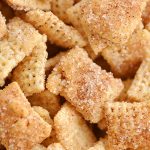 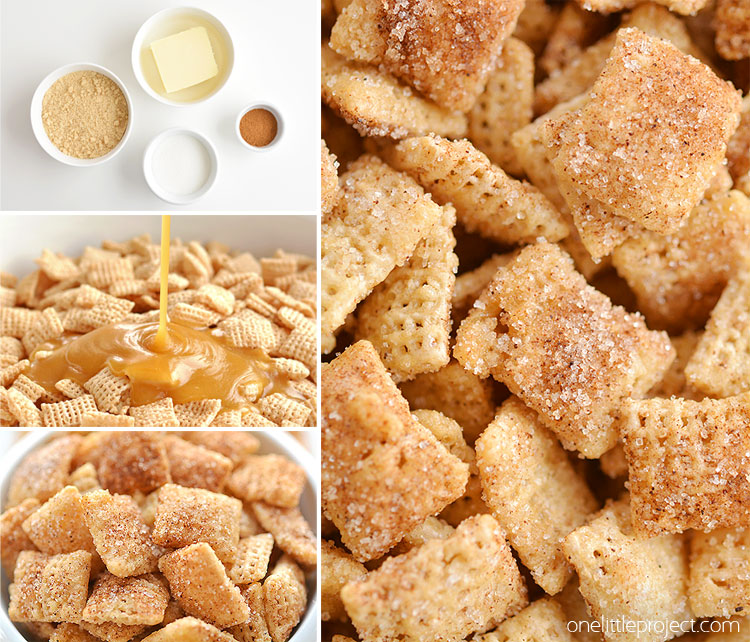 This cinnamon sugar chex mix is SO GOOD. It’s super easy to make, and the buttery crunch is insanely addictive! Such an awesome snack idea for parties, Christmas, Super Bowl, school snacks, mid-afternoon cravings, everything! So good!

If you’re looking for more amaaaaaaazing cinnamon sugar recipes, be sure to check out our recipe for cinnamon sugar chips. These are crazy addictive and sooooooo good. What is it about cinnamon and sugar!? 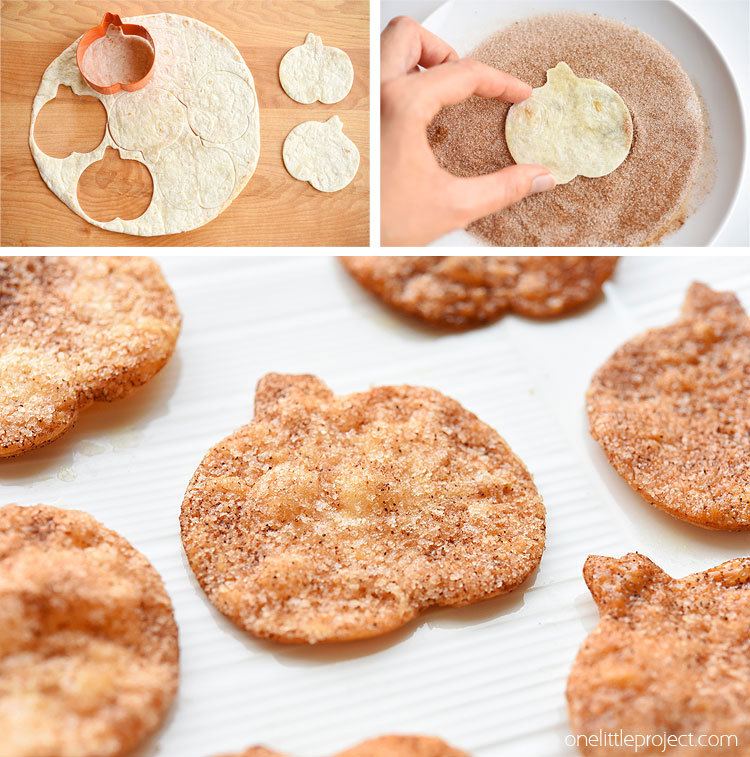