END_OF_DOCUMENT_TOKEN_TO_BE_REPLACED

These bacon wrapped pineapple bites are DELICIOUS – And they only have 3 ingredients! This is such an easy appetizer to throw together at the last minute and it tastes soooo good.

The bacon, pineapple and sweet barbecue sauce pair really well together – Like a little Hawaiian bite of heaven. And oh my word, that bacon flavour is SO good with the warm pineapple! There’s almost a magical after taste that gives you the warm and fuzzy feeling you get when you wake up to the fresh smell of bacon. Mmmmm… bacon…

I don’t want to give you the impression that these are going to look perfect, because mine definitely didn’t. Some of the bacon on mine crumbled and fell off. And some of the bacon cracked a bit and just hung over top of the pineapple. It didn’t really bother me, so as long as you’re okay with each one looking a little different and maybe even a bit messy, then you’re going to love these!

I’ve had these bacon wrapped pineapple bites sitting on a plate on the counter for over an hour now. The smell of bacon has been driving us CRAZY! Now that I’m done with the photos I told my husband we could finally eat them.

Before I could even get downstairs, he ate about half the batch! (Which is essentially a quarter pound of bacon…) I asked how many he had, he paused and said he lost count. So that’s a good sign, right?!

There’s only 2 left now, so I’m pretty sure I ate almost the entire other half of the batch. (I tried not to count!) Oops. But who can resist bacon!?

I bought a pre-cored and peeled pineapple from the grocery store. I’ve seen others make these with canned pineapple, but I prefer fresh.

Any barbecue sauce should work here. I used a honey barbecue sauce, with a bit of a hickory flavour and it was delicious. Try to find something sweet if you can, but if you have to get regular barbecue sauce, that will work too. Just maybe avoid honey garlic sauce, because I’m not sure those flavours will pair together well? 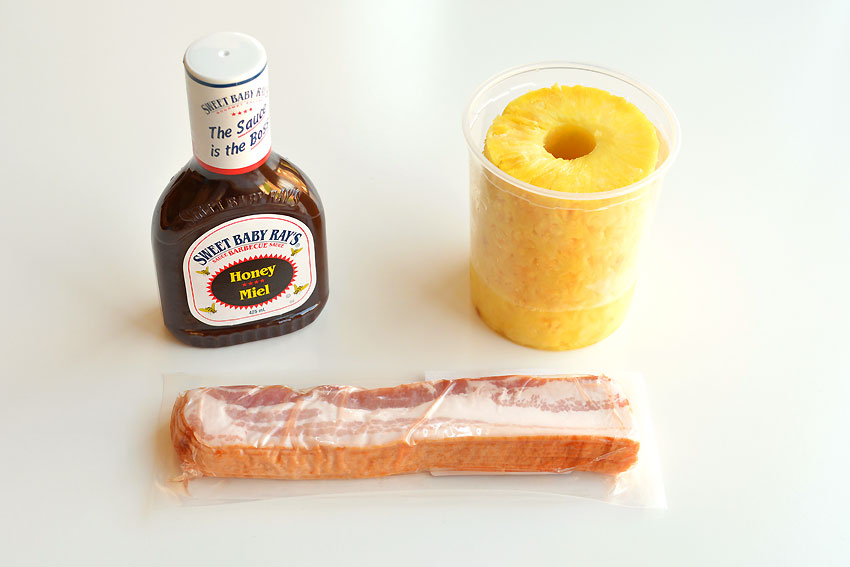 Cut your pineapple into chunks, then cut each strip of bacon in half. My pineapple chunks were a little thinner than the width of the bacon. (About 1 inch chunks). 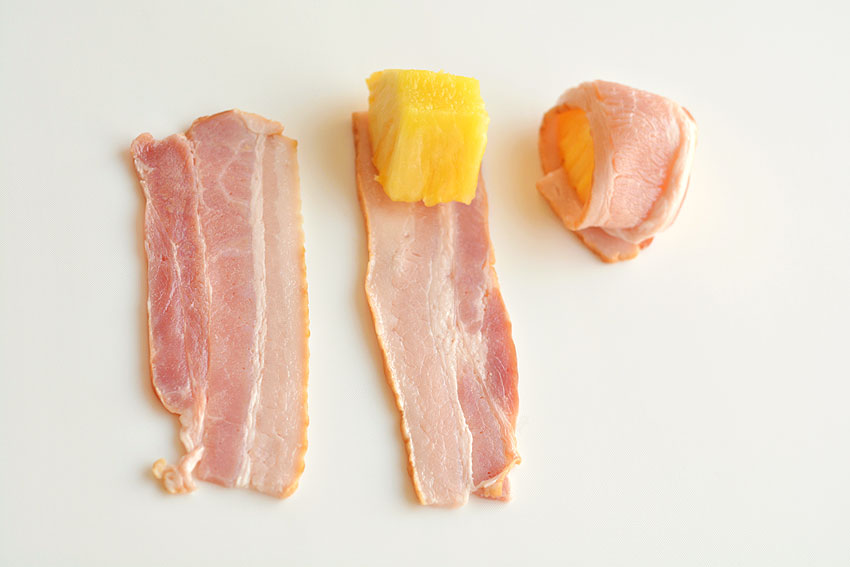 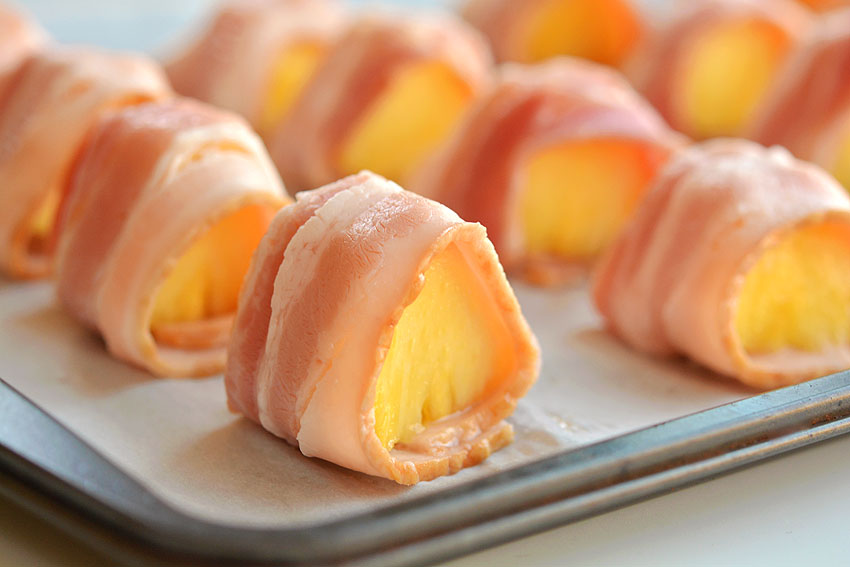 Place the baking sheet in a cold oven, then turn the temperature up to 400F.

Cook for 25 minutes. Remove the tray from the oven, and brush the barbecue sauce onto the bacon. Return the pan to the oven and continue baking for another 15 minutes, or until the bacon is cooked through. 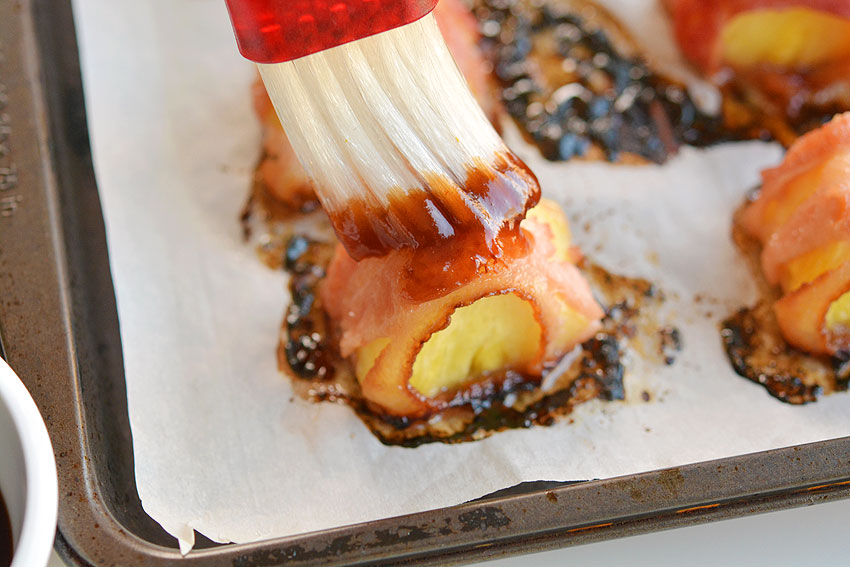 Oh my goodness, these smelled soooo good in the oven! 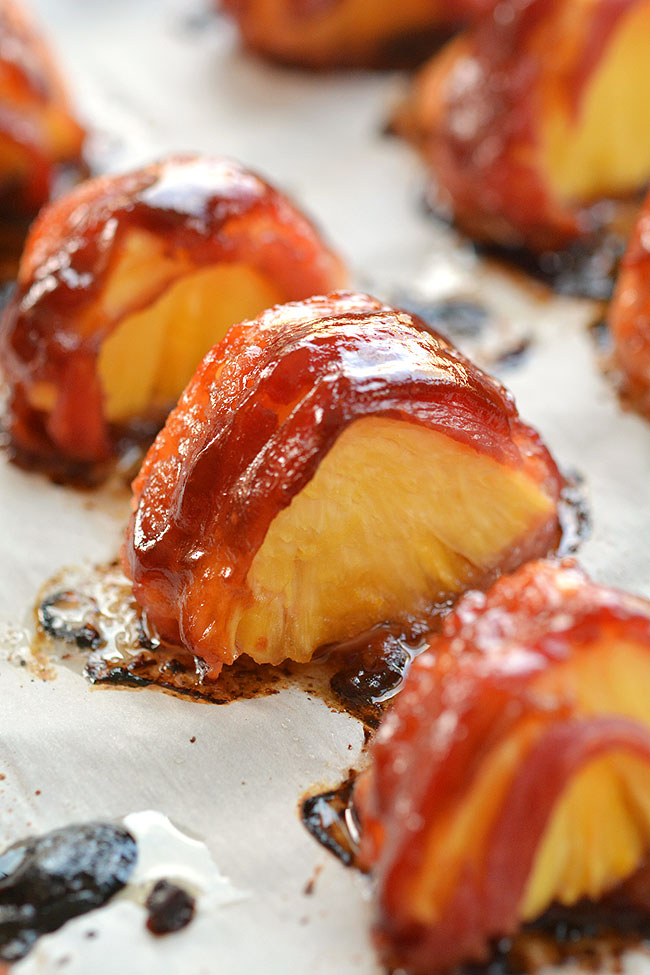 I couldn’t resist the bacon, so while I was taking the photos, I snacked on all the bacon that had broken off while these guys were in the oven. You know the stuff I was talking about that was hanging down over the pineapple? Mmmm…

So if you’re wondering why they look a little more “tidy” in the photo below, it’s because I ate the messy bacon. It’s a tough job, but someone’s gotta do it! 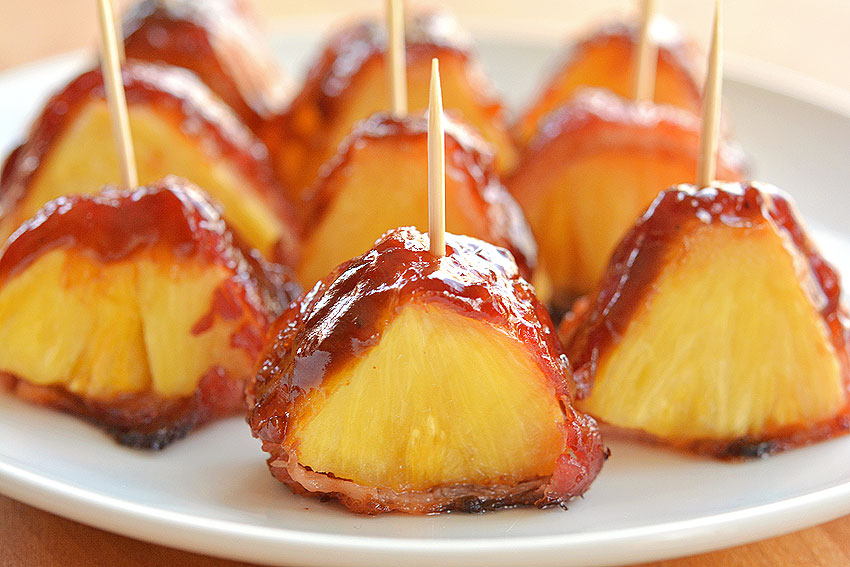 Try to use regular thickness bacon for these. And take a peek at the bacon in the package when you’re at the store and look for one with less fat and more meat if you can.

I compared two identical packages of bacon and was surprised to see how different the actual bacon looked in each pack! 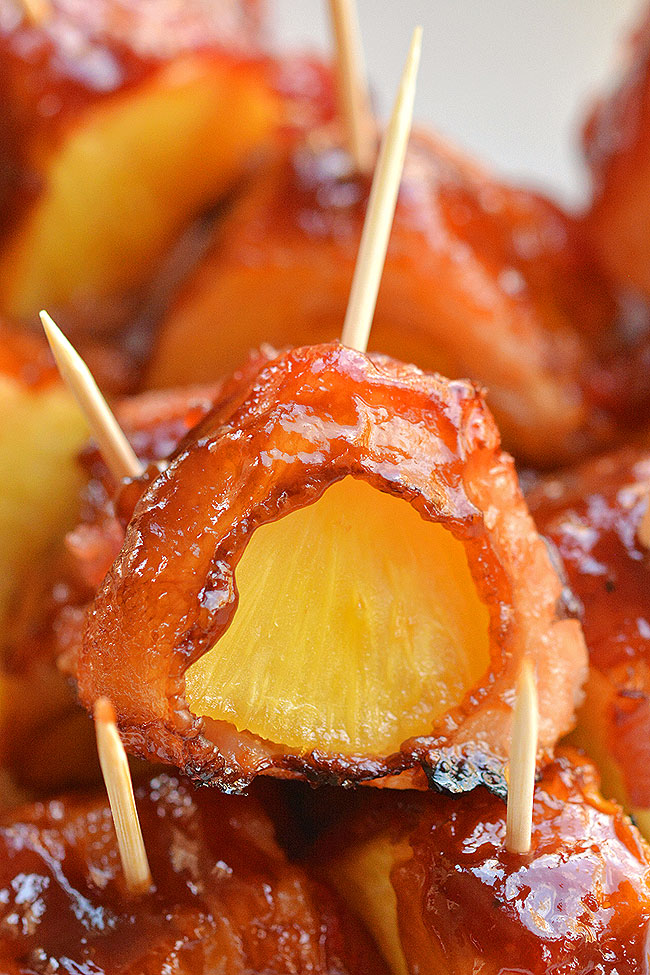 Finally, add a toothpick to each one and serve while warm. (Or room temperature… even a couple hours later they were STILL amazing…)

I don’t recommend cooking the bacon wrapped pineapple bites with the toothpicks in them because the toothpicks will burn a bit. As long as you make sure the pineapple is sitting on top of the ends of the bacon while it cooks, you shouldn’t need a toothpick to hold it together. 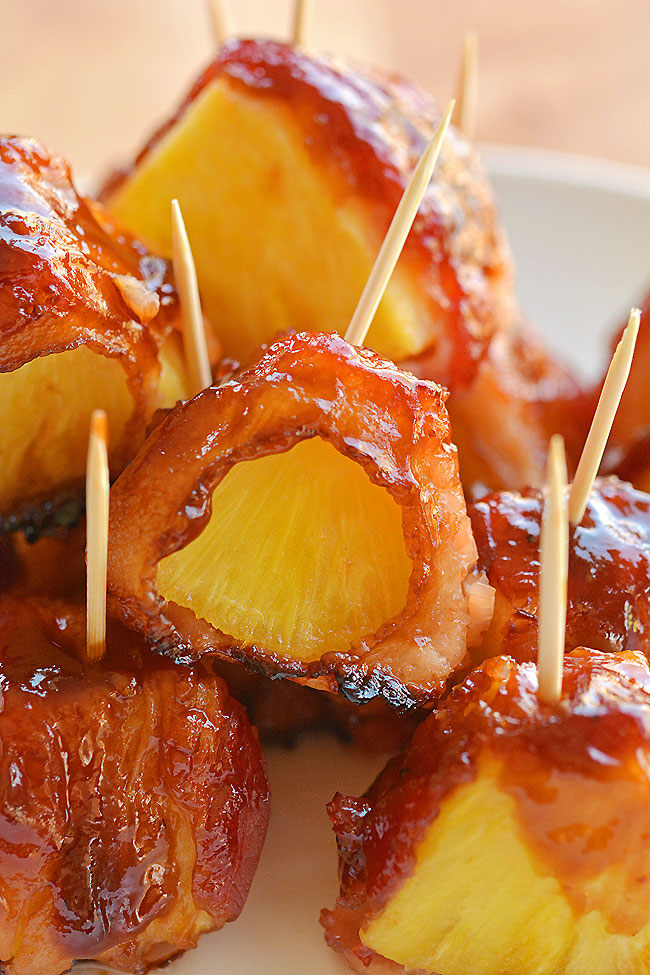 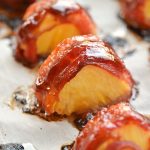 This is such an easy appetizer and a great three ingredient recipe that you can throw together at the last minute!
Prep Time10 mins
Cook Time40 mins
Total Time50 mins
Servings: 16

Try to find a sweet barbecue sauce. Honey, Hawaiian, or Chicken and Rib sauce work well. Avoid sauces that have strong flavours or "garlic" in the name. 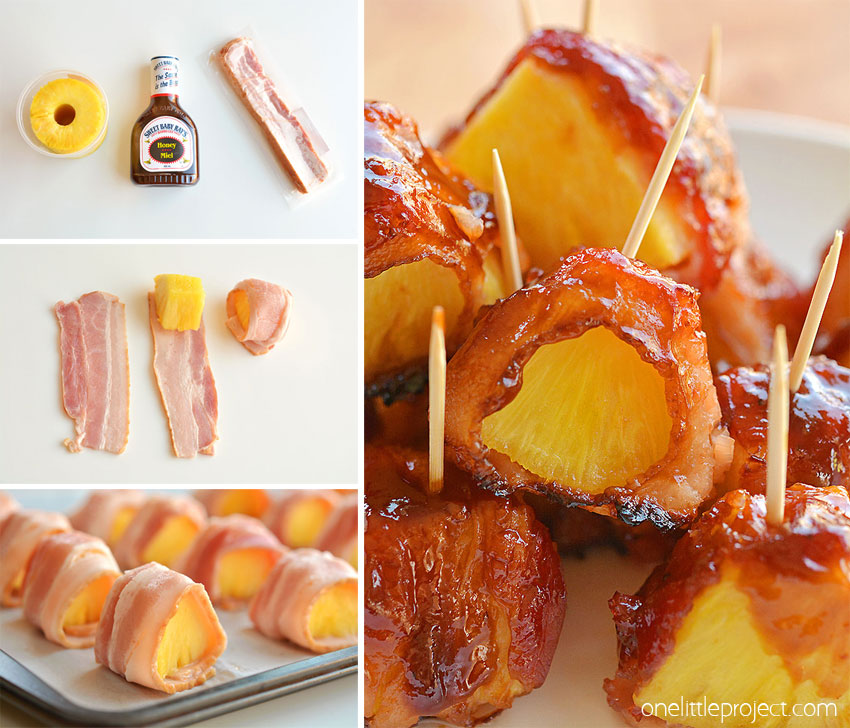 These bacon wrapped pineapple bites are SO GOOD!! And they’re so easy to make! This is such an easy appetizer and a great three ingredient recipe that you can throw together at the last minute. The bacon and the pineapple taste sooooo good together! Mmmm… bacon!

If you’re looking for more easy appetizer ideas, check out our recipe for meatball sub bites. Only 4 ingredients and they’re delicious! 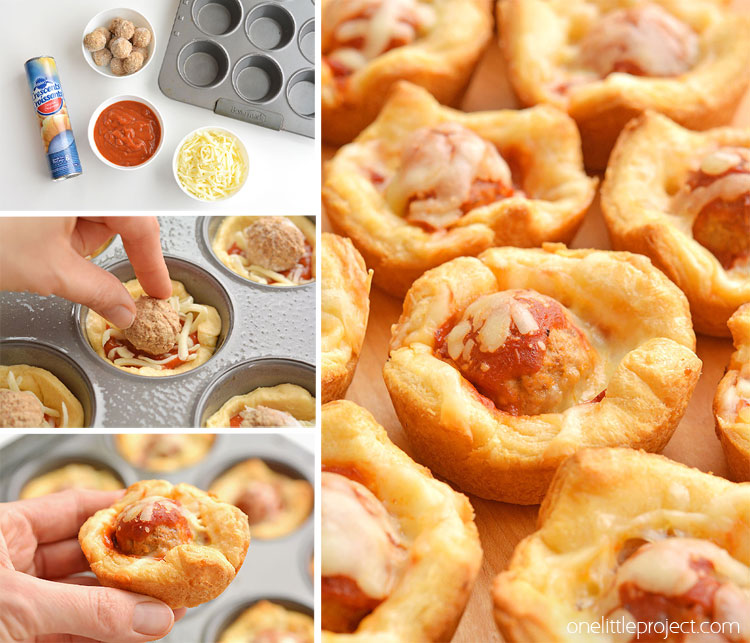 Be sure to check out our new book Low-Mess Crafts for Kids for 72 fun and simple craft ideas for kids! The projects are fun, easy and most importantly low-mess, so the clean up is simple!