END_OF_DOCUMENT_TOKEN_TO_BE_REPLACED

Do you ever do things that are completely and utterly ridiculous, and then look at whatever you made and crack up a little bit? That’s how I feel about these Halloween monster donuts. Because let’s face it – They are ridiculously AWESOME! It was one of those days where my husband came home from work, raised his eyebrows and said “That’s what you did today?!?” (Yup! I love being a blogger!)

And the best part is that they only took 5 minutes to put together. I mean, I guess you could bake the donuts from scratch if you wanted, but that’s not my style. Store bought donuts, check! Fangs, check! M&M’s, check!

While we were walking home from school, I said in a really excited voice “Guess what girls!? I made MONSTER DONUTS today!!” And they were all Ooooh’s and Ahhhh’s even though they didn’t know what I was talking about. They were excited that they got to have donuts as an after school snack as it was, but when they got home and saw those fangs, their eyes lit up.

I guess I’ve sheltered them from the world of artificial vampire fangs, because this was a new thing for them. They pulled the teeth out of the donuts, and popped them right in their owns mouths. Since they are only 6 and 4 years old, they learned the valuable lesson that you can’t eat donuts while wearing vampire fangs. True story.

Thrifty Fun originally made these little guys with white vampire fangs (as opposed to clear-ish) and chocolate chips for the eyes – such a brilliant idea! I personally love the M&M’s because they give each of the monster donuts a little bit of character.

So easy, and wickedly spooky! Yes, they’d be perfect for a Halloween party, but wouldn’t they be amazing to set on the lunch table at work? Especially with a lid on the box. Ha! Cracks me up just thinking about it!

I tried making these with chocolate donuts, but it didn’t work. The vampire fangs ended up breaking the chocolate donut apart. The honey glazed donuts were a little more flexible and held the fangs in place nicely.

For the eyes, I used regular M&M’s but you could use mini M&M’s, chocolate chips, or even candy eyeballs. 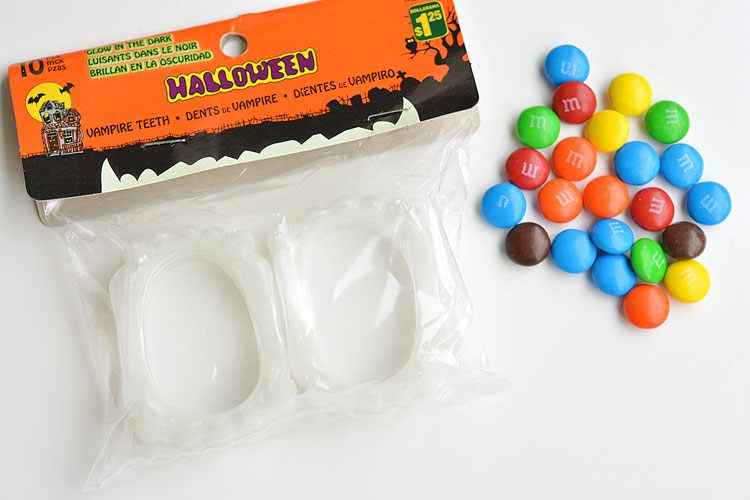 I didn’t notice until I got home, but I apparently bought glow in the dark vampire teeth from the dollar store. I washed them all with soap and water and dried them on a paper towel before I put them in the donuts.

You’ll need to squish them up and pinch them together to get them into the donut hole. Just push it into the hole and let it open up on its own. Then adjust it as you need to. 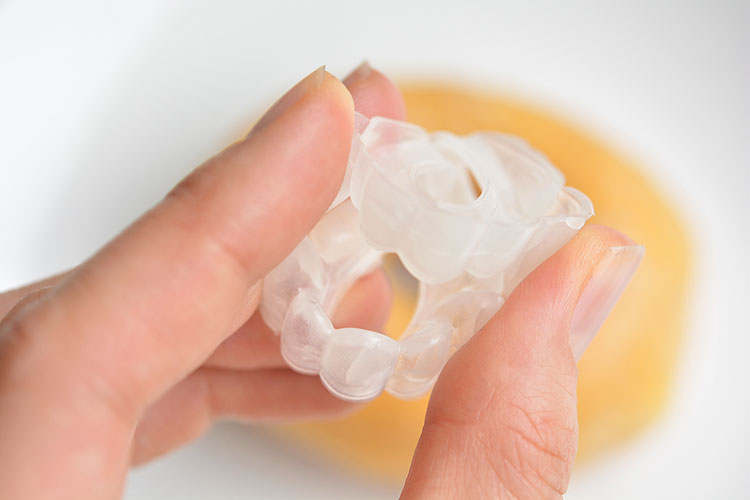 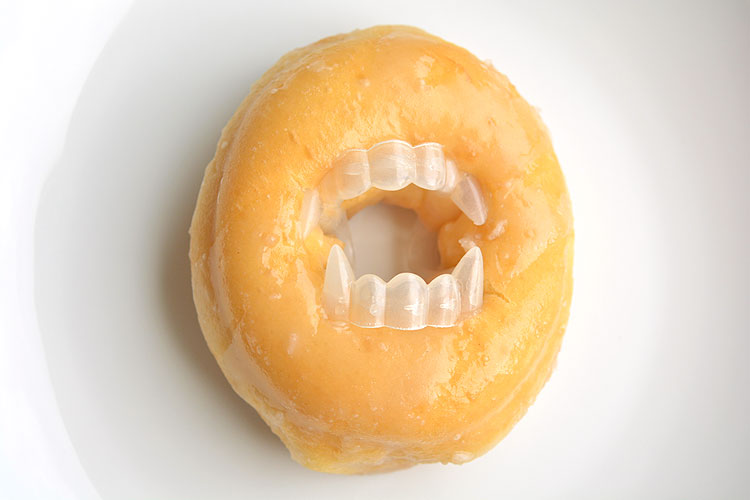 I didn’t trust that the eyes were going to stay on the glaze by themselves, so I used Wilton’s white decorating icing to “glue” them on. You can use whatever you have on hand – melted chocolate chips, regular icing, or even peanut butter. Just something sticky that will help keep them from sliding off. 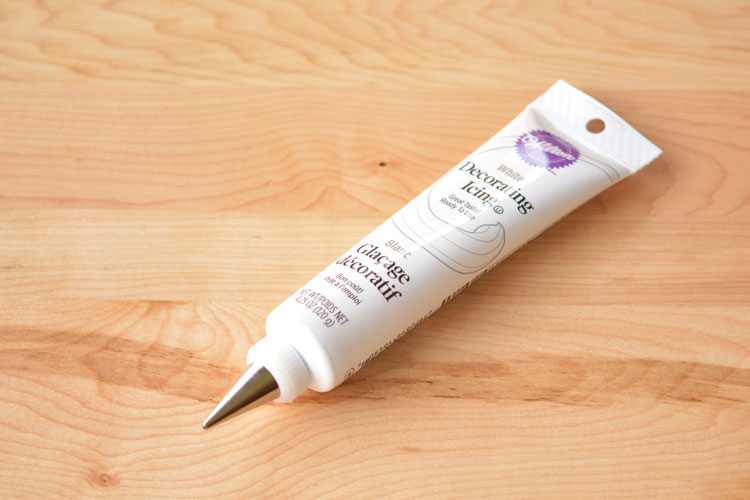 Squeeze a small dot of icing onto the donut for the eyes and set them in place with the “M” side down. 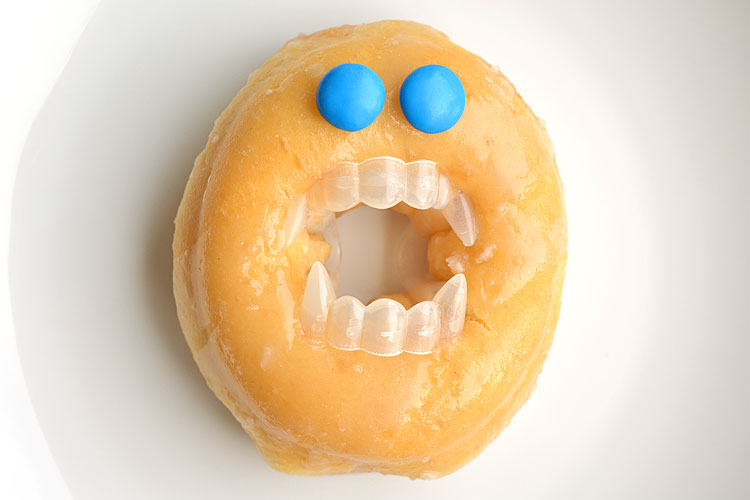 The deeper you can get those fangs into the donut hole, the more realistic it will look. You know. As realistic as a donut monster can look. 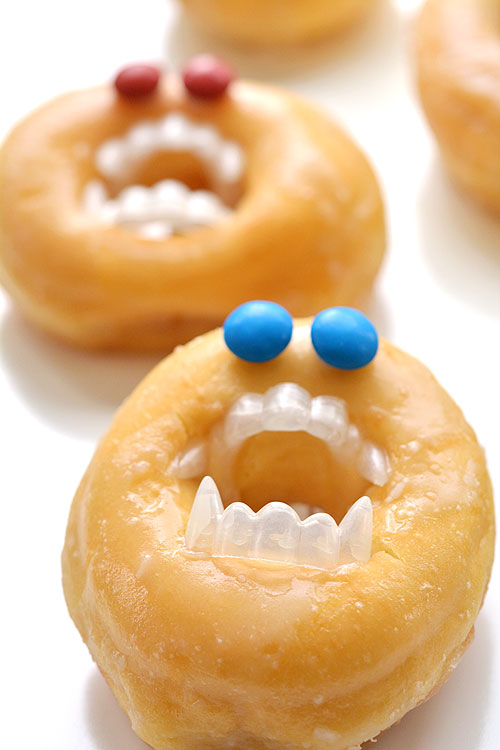 I think my favourite part was putting them all back into the box. I love the idea of watching someone open the box expecting to see regular donuts! 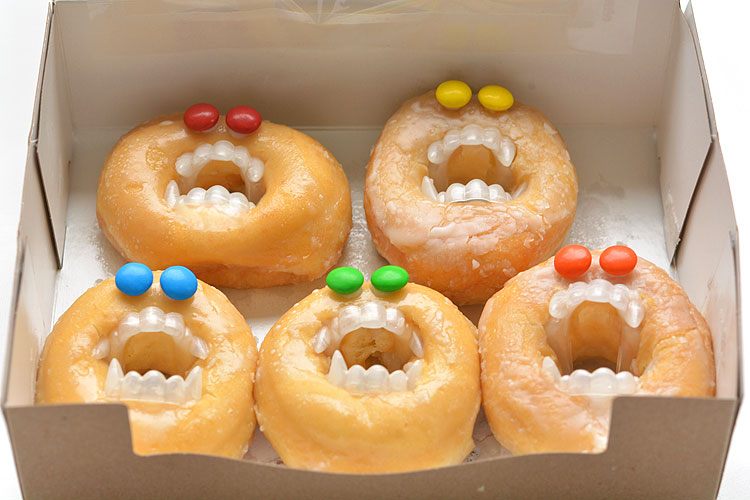 I also love how creepy they look with all the different eye colours. In the photo below, doesn’t it look like the yellow guy at the back is going to take a bite out of the orange guy? 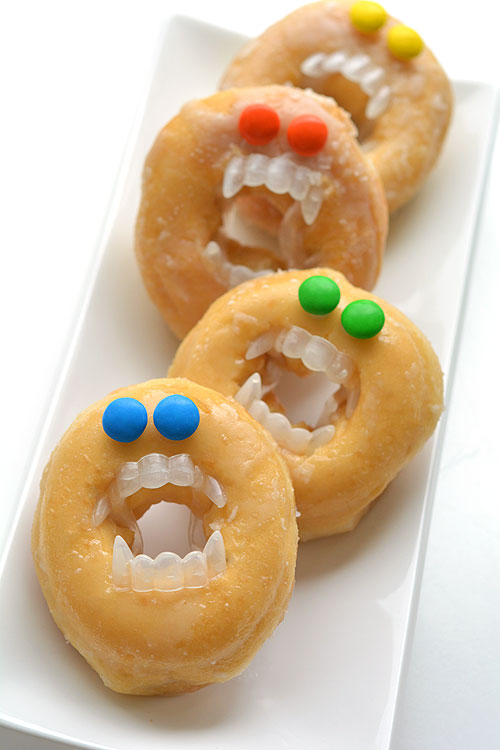 And in case you’re wondering, yes, I took the monster donuts into a dark closet to see if the glow in the dark fangs made them look cool, but I think I would have had to super charge them under a bright light first. They’re definitely more effective in daylight. 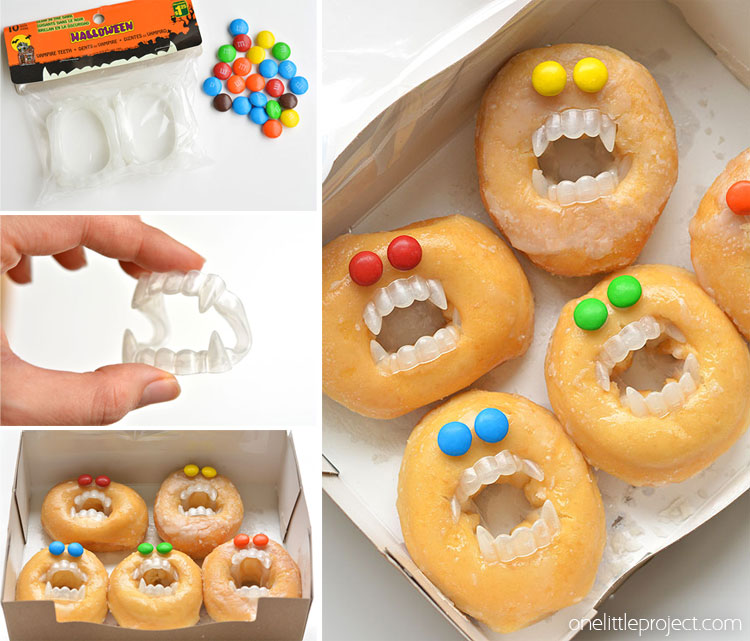 These Halloween monster donuts are an awesome treat idea! They take less than five minutes to make and will most likely make someone laugh… or freak them out. But I think I’d be happy with either one of those outcomes!

If you’re looking for more fun ideas to freak people out, be sure to check out our Jello worms tutorial. Even though these are made with sweet and delicious ingredients, they were so gross looking I had trouble eating them! LOL! 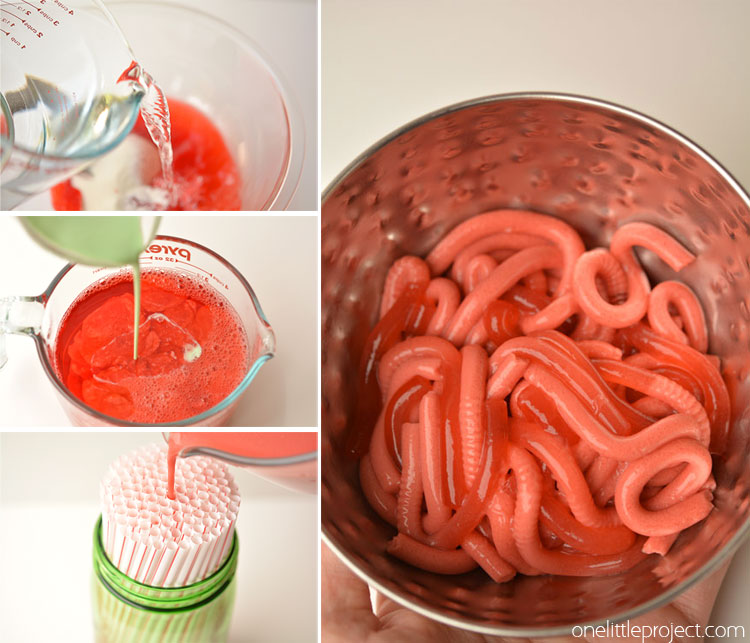