END_OF_DOCUMENT_TOKEN_TO_BE_REPLACED

Remember how I said I was going to paint the headboard for Leah’s big girl bedroom?  That sneak peek was two weeks ago already, and it still isn’t done… sigh.  We bought this headboard used on kijiji from a home that had smokers and it smelled terrible!  I have every intention of painting it, and I think the paint will cover it up, but I don’t know for sure.  I want to do everything I can to get as much of the smell out of that wooden headboard as possible before I refinish it. 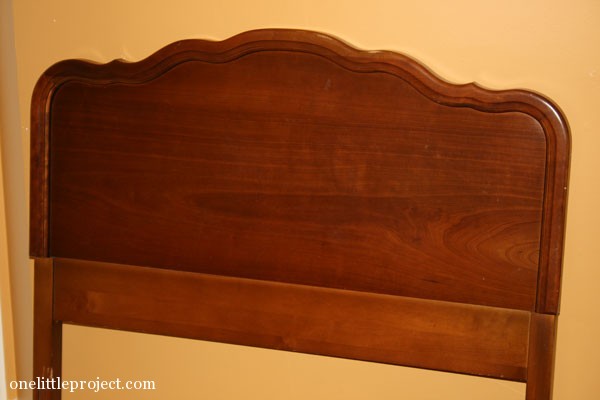 It was one of those purchases where I had forgotten to ask the sellers if they were smokers, I had already driven all the way across town, and the townhouses were a little shady, so I just wanted to get out of there.  It didn’t even occur to me that it smelled until I got it in the back of my station wagon (yes, I drive a station wagon!) and the whole car started smelling like cigarette smoke.

When I got home, I offloaded it into the garage and it stayed there for a couple weeks.  I don’t have any experience with smoky furniture so I was really hoping that airing it out in the garage would help, but it didn’t.

So I brought it inside, and I started wiping it down with Lysol wipes, just to be sure any germs from the sellers were gone.  It didn’t get rid of the smell, but at least it felt more sanitized.  Lots of dirt was still coming off of it, so I decided to move on to dish soap and warm water.  So I scrubbed with a cloth and got even more dirt off, but the smell was still there… and getting the wood wet just made it worse!

At this point I had no idea what to do, so I had to Google it.  One recommendation was to try a mixture of half water and half vinegar and to scrub it down.  So I used a bathroom brush scrubber to scrub it down.  Now it was wet, it smelled like vinegar AND smoke.  It was really awful. 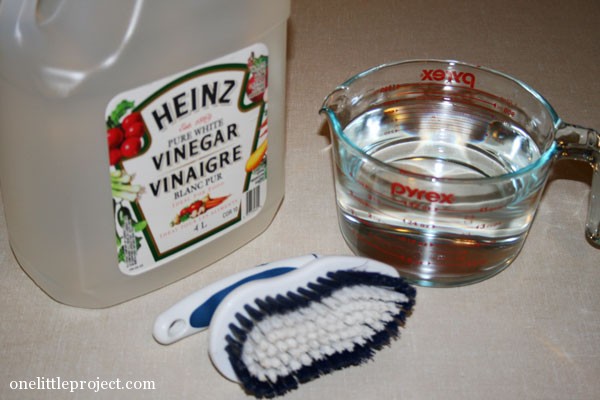 I knew I couldn’t paint it if it was wet, so I set it aside to let it dry in my sewing room and it smelled up the ENTIRE room, to the point that it gave me a headache when I was sewing the tulle bedskirt!

Seeing that the vinegar didn’t work, I tried something else recommended on Google – baking soda.  I’m happy to report that this seemed to work really well!

Get the smell of cigarette smoke out of wooden furniture 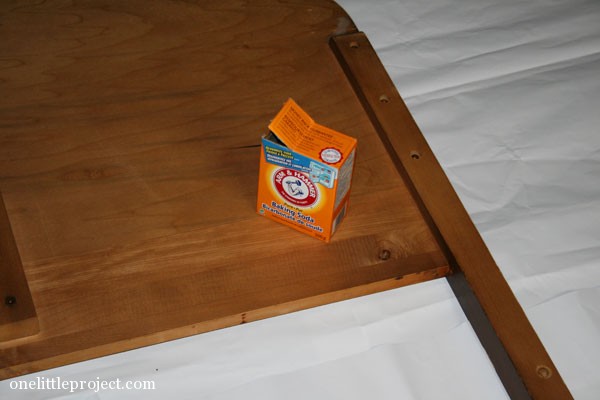 I sprinkled about a box and a half of baking soda onto the headboard. 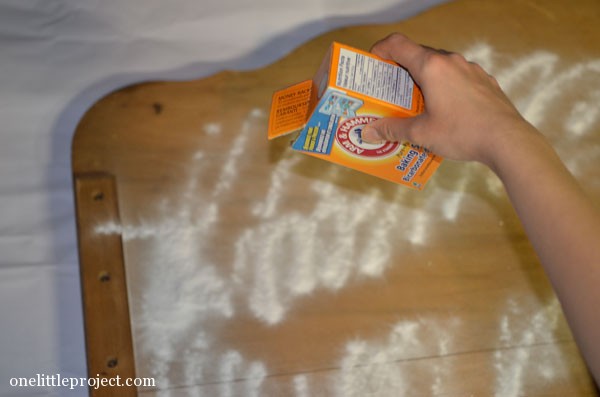 I tried moving it around with a paint brush, but it was better to just sprinkle tons of it on to make sure it was fully covered. 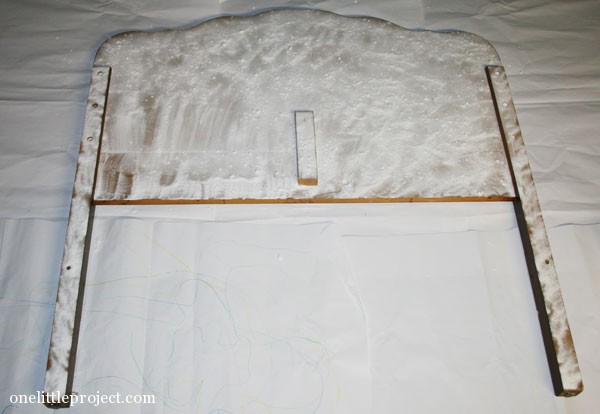 I read that you can remove the baking soda after letting it sit overnight, but I didn’t think that sounded like it would be long enough.  So I was on the cautious side and let it sit for a whole week. 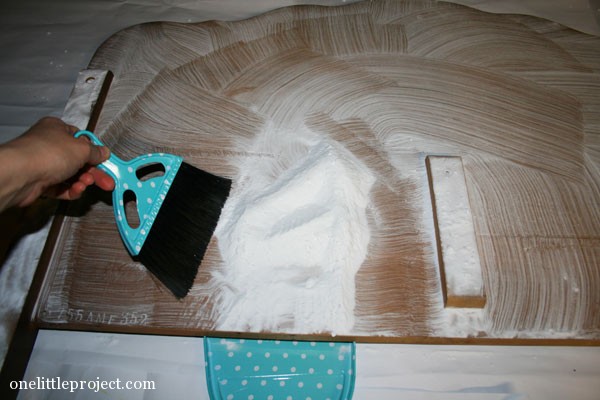 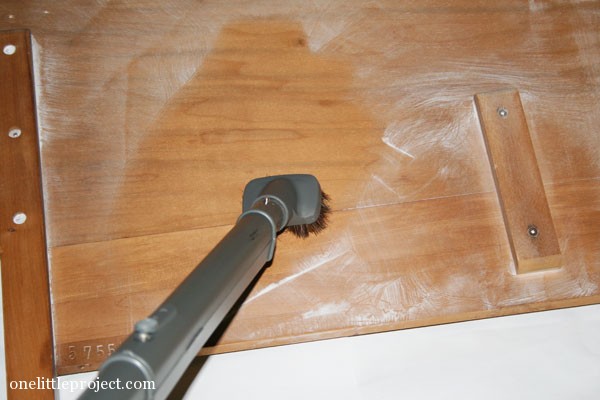 I also read that you should use your vacuum to clean it up, but I’m pretty sure that would have majorly clogged up my vacuum and gone right through the filter and back into the air.  So I used a mini brush and dustpan to sweep as much of it up as I could, and then I vacuumed up whatever dust was left.

See how much baking soda I used!? 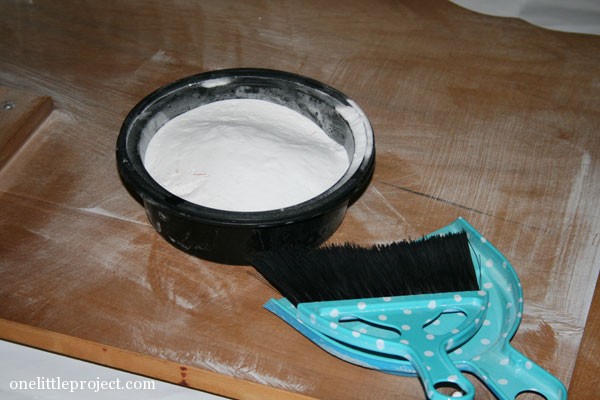 After all the baking soda was off of it, I smelled it and I was super impressed!  You really couldn’t smell the cigarette smoke at all on the side that had the baking soda!  The front still smelled awful though.  So here is where it stands right now (or rather where it lies on my basement floor): 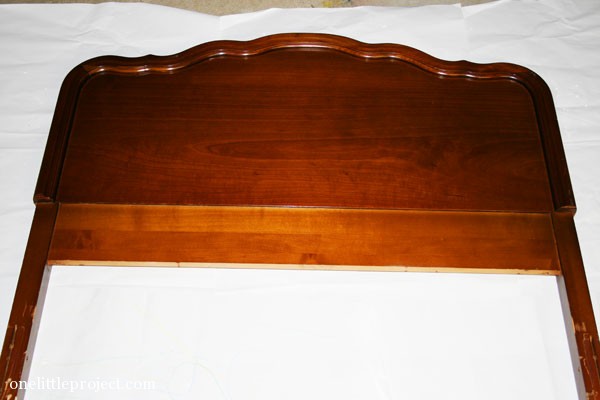 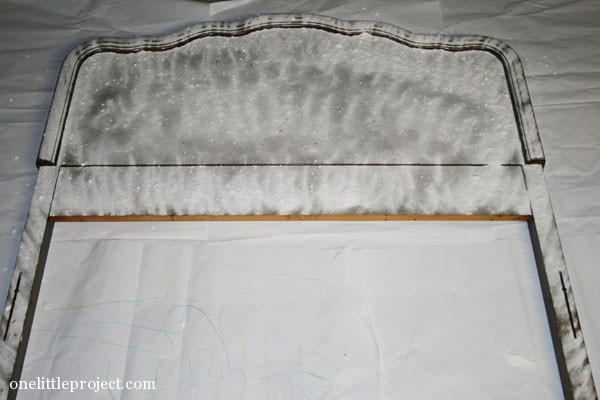 I had to flip over the headboard and start again on the front of it.  Rather than opening a new box, I just sprinkled the used baking soda onto this side.  It’s sitting in the basement as we speak, so I still have to wait a few days for it to absorb the smoke smell.  It’s still going to be awhile before I can get it painted.

It took a few tries, but I figured out how to get the smell of cigarette smoke out of wooden furniture and I am relieved to know that painted or not, the awful cigarette smoke smell will be gone from Leah’s headboard!